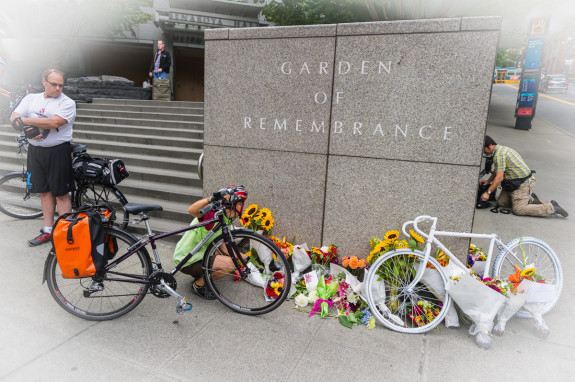 Just one wrong turn — one missed glance into bike lane on 2nd Ave — and a man driving a box truck struck and killed Sher Kung Friday. By witness accounts, the man driving the truck jumped into action and tried to help her, but became distraught when he realized it was too late. He made a left turn right in front of her while she biked in the skinny painted bike lane, and it killed the young mother.

The outpouring of grief has been remarkable. It comes from those who watched it happen, those who knew her and those who bike downtown every day and know that it could have easily been them instead of Kung. A flower memorial sprung up within hours of the deadly collision, and a couple ghost bikes followed shortly.

The corner where she died is also the site of the Garden of Remembrance, a memorial to Washington residents who have given their lives in military service. And though Sher Kung did not die on a battlefield, her young legacy will live on through the lives of American service members who can now be true to themselves while wearing their uniforms.

Kung worked as a legal fellow for the ACLU and helped win a case that was instrumental in the repeal of Don’t Ask, Don’t Tell. An AP photographer took this shot of Kung standing next to Margaret Witt after a federal judge ruled that Witt must be reinstated to the rank she had earned before she was discharged for being gay. 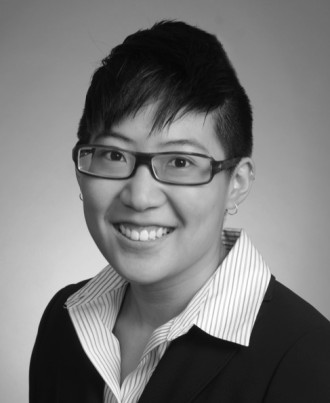 According to her bio on the Perkins Coie website, Kung has continued to do a lot of pro bono civil rights work including work for juvenile immigrants and defending against sexual orientation discrimination.

Kung was less than a block from the Perkins Coie office when she was struck.

Perkins Coie told the Seattle Times that Kung was “one of our brightest young lawyers … an exceptional lawyer and a wonderful comrade, with boundless energy, legal brilliance, and relentless optimism … Our hearts go out to her partner and their child, her extended family, and her many friends.”

The Washington ACLU released a statement to KOMO saying, “The staff of the ACLU is deeply saddened by the news of her death. She was very committed to civil rights and social justice, and was a lively person and was fun to work with.”

Many people — in emails to Seattle Bike Blog and in the comments and social media — have expressed a desire for a memorial bike ride for Kung. We will report on any such event when we learn about it.

Our deepest condolences go out to her family and friends.

For more on Kung, see these reports by KOMO and King 5.

UPDATE: An online memorial fundraiser has been set up to help support Kung’s family.

UPDATE 2: See this story for details on a memorial ride planned Friday, September 5.

Founder and Editor of Seattle Bike Blog.
View all posts by Tom Fucoloro →
This entry was posted in news and tagged 2nd ave, deaths, sher kung. Bookmark the permalink.