Toward Zero: Honoring the 150 people killed or badly injured in Seattle traffic since Sher Kung 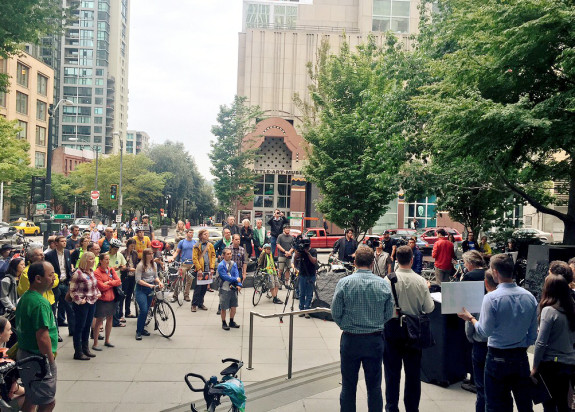 A crowd gathered on the steps of the Garden of Remembrance downtown Friday listened to 150 bell rings, one for every person seriously injured or killed in Seattle traffic in just one year.

They also heard ten names, all people who were killed in traffic in the same year.

“We are honoring today — not names, not numbers — but people,” Seattle Neighborhood Greenways Executive Director Cathy Tuttle told the crowd gathered at 2nd and University on the one-year anniversary of Sher Kung’s death. “People who are sisters and brothers, children and parents, wives and husbands, friends and lovers.”

The event was not specifically religious, but it was about faith. We have to believe that traffic deaths and injuries are preventable, that our collective action as residents of a city can bring changes that calm our streets. Because this is a public health emergency prolonged by our society’s inability to see these tragic moments that take or forever change so many lives as anything more than accidents.

Bob Anderton, a safe streets advocate and (Seattle Bike Blog advertising) bicycle lawyer, read the names of ten people who have died in just the past year on Seattle streets. An eleventh person’s identity was not yet released, but he was remembered, too. Here is the list as he read them:

Sher Kung, 30-year-old mother and civil rights attorney, killed on August 29, 2014 while biking on 2nd Avenue to work, which was just across the street.

John Panzar, 37-years-old, killed on October 24 while walking across the street in North Greenwood.

Benjamin Ward, 52-years-old, killed on November 20 while walking across the street in Delridge.

Leo Almanzor, 68-years-old, killed on November 22 while walking at 5th Ave and Pike Street, just after getting off his work as a janitor.

Larry Fletcher, 76-years-old, killed on January 29 while walking in a crosswalk across 15th Avenue NE in the U-District.

Michelle Jozefink, 45-years-old, killed on March 26 while walking in a crosswalk at 5th Avenue and Seneca Street.

Sean Harris, 26-years-old, killed on April 18 in the Rainier View neighborhood while riding a motorcycle.

Andy Hulslander, 45-year-old father and husband, killed on June 27 when struck from behind while biking on NE 65th Street on his way home from work.

Unidentified man, killed on August 7 while driving in the Rainier View neighborhood. 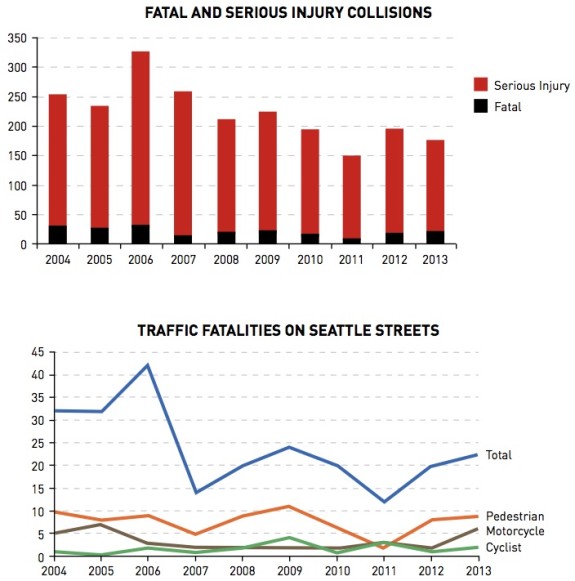 Remarkably, this much carnage and death is actually very safe by American big city standards. And it continues a downward trend in Seattle traffic deaths and injuries.

But it’s not good enough. And anyone who knew and loved any of the people listed above knows this too well.

The data reinforces the fact that Seattle may be the big US city with the best chance to reach Vision Zero. It also shows that while the number of people walking and biking grows, deaths remain consistent year-to-year. That means the death rate is going down, but it also means we are not doing enough to protect people outside cars.

Thanks to tireless grassroots work and leadership in City Hall, there are two opportunities coming up to put more funding into safe streets that protect everybody. You can get involved right now with Let’s Move Seattle, the campaign to pass Prop 1 this November. That campaign kicks off Tuesday (more details on the party here).

Vigil organizers from Seattle Neighborhood Greenways and Cascade Bicycle Club have also launched an effort to improve red light enforcement by installing red light cameras. The money raised by these cameras would then go into a Vision Zero fund rather than the general city budget.

This is a brilliant idea essentially modeled on the success of Seattle’s Safe Routes to School speed zone cameras. People making dangerous driving moves or mistakes would foot the bill for funding safer street designs. The red light tickets and cameras themselves (when installed fairly) have been shown to increase safety. So putting that money back into safe streets only multiplies the safety benefit.

You can sign a petition to support this idea and get involved in helping to make sure it gets into the city budget this fall. Outgoing City Council Transportation Chair Tom Rasmussen said he will introduce the legislation, but it’s going to take support from people like yourself to push it through.

If you weren’t able to be there, you can watch Seattle Channel video from the vigil here:

5 Responses to Toward Zero: Honoring the 150 people killed or badly injured in Seattle traffic since Sher Kung