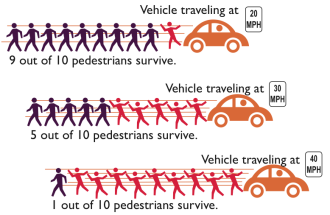 The city will invest $14.8 million in road safety projects near schools by the end of 2014, all funded by new school zone speed cameras.

This means safer crosswalks, traffic calming and new sidewalks near 20 schools. And the best part is that the bill will be paid by people caught speeding near schools. Seriously, how brilliant is that?

The city installed a couple cameras last year, and the revenue generated far exceeded expectations (bad and good news). But there are also signs that the cameras themselves are changing behavior. Citations have fallen 16 percent since cameras were installed, and nearly every person who has received one ticket has not received a second.

The end game for the cameras would be zero speeding in school zones. People in Seattle will know that school zone speeding is taken extremely seriously. Of course, this would theoretically dry up the millions the cameras generate for school safety, but that would be a beautiful problem to have.

In the meantime, the city is investing camera money back into more cameras, and the city will be on track to grow the annual school safety funds in years to come.

In addition to road design changes, the funds will also help start walk/bike encouragement programs at schools and fund road safety education. Programs like walking school buses and bike trains have been remarkably successful in schools across the city, and a little funding could go a long way to increasing the number of kids getting to school safely under their own power.

The more kids walking and biking to school, the less crazy the school drop off/pick-up times are and the less traffic there is clogging streets during rush hour. And, of course, kids will be healthier.

Earlier this year, we challenged the city/region/state to work toward the very ambitious (maybe impossible?) goal of zero dangerous streets near schools by the end of the year. Impressively, Mayor McGinn may have actually figured out how to make a huge dent in the problem in just a couple years. This is no small feat.

The city is now working on a plan to direct school safety investments. The School Road Safety Plan will be completed next year.

More details on the investments, from the mayor’s office:

Mayor Mike McGinn today announced substantial new investments for road safety at Seattle-area schools. $14.8 million in revenue collected through the City’s school zone speed cameras will be re-invested in safety improvements at schools across Seattle over the next two years. This will include improvements like new sidewalks, improved street crossings, and traffic calming at more than 20 schools as well as expanded education and encouragement programs to increase safety for students.

“Keeping children safe as they travel to and from school, as well as throughout their neighborhood, is a top priority,” said McGinn. “This substantial new investment will help us make lasting improvements and encourage everyone to be safe on our roads.”

“Safety is SDOT’s number one priority, as stated in our 2012-2013 Action Agenda. We are committed to improving safety for all users of the transportation system. I am pleased that the school camera enforcement program will enable us to invest in significant improvements around schools and throughout the city,” said Peter Hahn, Director of the Seattle Department of Transportation.

The City estimates $14.8 million in revenue will be generated by these cameras by the end of 2014. To date in 2013, an estimated $2.9 million has been appropriated for road safety education, operations, and infrastructure. An additional $3.3 million is proposed as part of a 3rd Quarter supplemental budget request. The Mayor will include $8.6 million for school safety investments, including capital infrastructure, operations and maintenance in his proposed 2014 budget. Safety improvements will be constructed in 2014 and 2015, while education efforts will be ongoing.

“How exciting! Money to support safer streets for the most vulnerable people in our communities — our children! We are delighted and strongly support Seattle’s new School Road Safety investments,” said Cathy Tuttle, Executive Director of Seattle Neighborhood Greenways.

A School Road Safety Plan will be completed next year. This plan will guide future investments for infrastructure, review best practices for school road safety for engineering, education, encouragement, enforcement, and for evaluation. It will look at funding and implementation strategies for safe routes to school, develop safety education and encouragement curriculum, evaluate all existing school zones and walking routes, develop prioritization criteria for future improvements, and more.

12 Responses to City will invest $14.8M from school zone speed cameras into Safe Routes to School