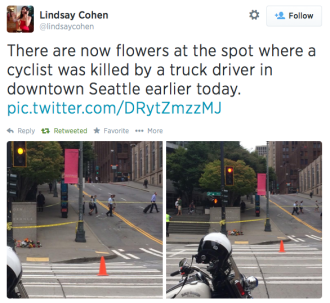 A woman biking died today after colliding with a large box truck at 2nd Ave and University Street in downtown Seattle.

We send our deepest condolences to her friends and family.

The tragedy comes barely more than a week before completion of a road safety project on 2nd Ave designed to solve the well-known problems with the skinny, paint-only bike lane. One of the biggest problems with the current design is the tendency for left-turning motor vehicles not to yield to people biking in the lane next to them.

The city has been prepping the street to open new protected bike lanes on 2nd Ave as soon as September 8. The new bike lanes will put either a row of plastic reflective posts or a row of parked cars between moving car traffic and people biking.

The lanes will also come with new traffic signals that give left-turning cars and people biking different signal cycles to prevent conflicts like the one that happened this morning. When bikes have a green, turning cars would have a red arrow and vice versa.

We will have more updates on this tragedy soon. Below are details from SPD:

A cyclist was killed Friday morning after she was struck by large truck in downtown Seattle.

The driver of a large box truck was headed south on 2nd Avenue and turned left on to University Street, where he struck and fatally injured the cyclist.

Police contacted the driver—a man in his 40s—at the scene and called for SPD’s Traffic Collision Investigation Squad.

Police have closed 2nd Avenue around University Street while traffic investigators review the incident and interview witnesses. The street will be closed for several hours. We’ll have more information as it becomes available.

Cascade Bicycle Club has been organizing a team of bike ambassadors to help educate people on how to use the new bike lanes properly once they are completed. It all seems depressingly too little, too late now, but it will be important work. You can sign up online if interested.

Founder and Editor of Seattle Bike Blog.
View all posts by Tom Fucoloro →
This entry was posted in news and tagged 2nd ave, deaths, downtown. Bookmark the permalink.