City will remove one of the Sher Kung ghost bikes 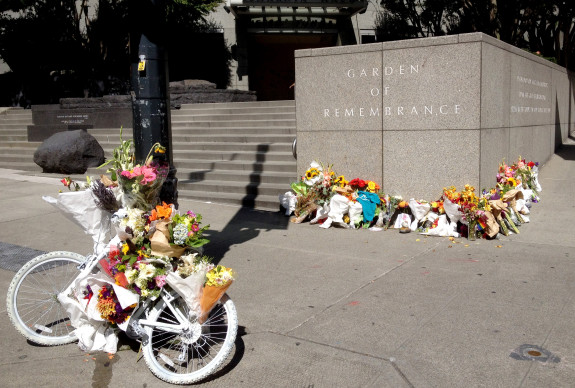 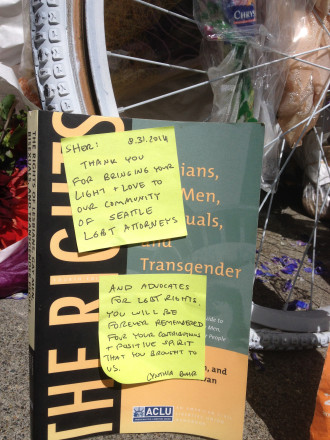 As news spread that a young and popular lawyer had died biking to work downtown, mourners came to 2nd and University to pay their respects. Many left flowers, some left notes. Two people brought ghost bikes. One person even left a copy of a book about fighting for LGBT rights, a cause Kung was dedicated to furthering.

She was on the legal team that won a case that became instrumental in the repeal of the Don’t Ask, Don’t Tell military policy barring openly gay service members. This made the site of the spontaneous memorial to her even more powerful, since it is also home to the Garden of Remembrance honoring military veterans.

Now, the city is getting ready to remove one of the two ghost bikes left in Kung’s honor, but they want everyone to know why. SDOT Community Engagement Liaison Dawn Schellenberg reached out to Seattle Bike Blog to explain that, being on the busy corner, it interferes with heavy walking traffic. The second ghost bike is further from the corner and will remain there.

To help with pedestrian movement, the Seattle Department of Transportation is preparing to remove one of the two ghost bikes commemorating Sher Kung’s memory. The one being removed is closest to the intersection and curb ramp. The reason we’d like to remove it is to help with pedestrian congestion/movement in the area. The department will follow typical procedures and tag the bike with a 72 hour removal notice prior. Currently there are no plans to remove the second ghost bike. 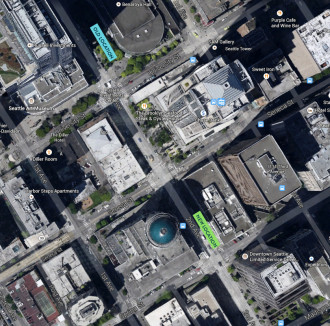 This news comes just after Pronto Cycle Share moved the 2nd and University station (named the “Sher Kung Memorial Station”) a couple blocks down the hill due to concerns that it was “imping[ing] on the peaceful and contemplative nature of the memorial.”

The station was popular due to its location near University Street Station and 2nd Ave.