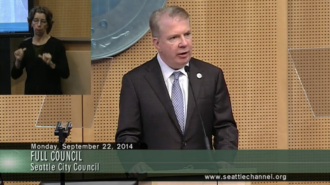 Mayor Ed Murray unveiled his first ever city budget Monday afternoon, which includes big investments in neighborhoods, an expansion of the Summer Streets program, more funding for protected bike lanes downtown and an expansion of Pronto Cycle Share into the Central District and Yesler Terrace.

But the mayor also noted that some big changes in transportation funding must come next year when the Bridging the Gap property tax levy expires at the end of 2015. Without new funding, the transportation budget will be slashed across the board in 2016. This will be terrible for bike and walk funding as well as needed paving and bridge repair work.

He reiterated his campaign promise to “end the transportation mode wars” by creating an integrated plan for funding all needs, setting the stage for the next transportation funding effort. Stay tuned for more on how to get involved in the building of that effort, which will begin before too long.

Of course, the budget still needs to go through the City Council, which can make changes as they see fit. So stay tuned for that process, as well.

Below is a look as some of the biking and walking changes to the budget.

By the time the City Council votes on the 2015-16 budget, Pronto Cycle Share will have been operational for about a month. With 50 stations in downtown, South Lake Union, Capitol Hill and the U District, one of the biggest questions people will ask is: Why aren’t there stations in lower income areas like Yesler Terrace and nearby parts of the Central District?

Murray has anticipated these questions by including $600,000 (on top of about $400,000 received in federal grant money) to increase low-income access to the system and expand it into the CD and Yesler Terrace in 2015.

Not only has Murray made launching bike share in 2014 a top transportation priority, but he is also not waiting very long to get expand it into less-served areas near the city center. 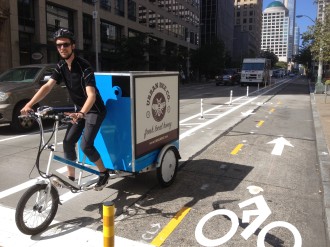 Murray surprised even the most optimistic bike advocates in town when, just months into his term, he announced that he would accelerate protected bike lanes on 2nd Ave. And with the help of a tireless SDOT team, those lanes opened in early September.

The biggest complaint I have heard and continue to hear about the lanes is: Why stop there? Well, Murray does not intend to, so he has included $800,000 in the 2015 budget “for protected bicycle lanes on Second and Fourth Avenues to improve safety for current riders, attract new riders, and signal the City’s commitment to improving bicycle facilities in the center city,” according to the budget proposal.

This money would help the city leverage millions in federal grant funding it has received to design and build a center city protected bike lane network.

The current schedule is to reach out to the community and develop the design for a network of protected bike lanes downtown in 2015, then start rolling them out in 2016 (though we hope the city can accelerate some of the most-needed connections before then).

Murray praised the SDOT staffers who worked their butts off to get the 2nd Ave project open in time near the end of his speech:

I also want to thank a few employees who were critical in successfully completing the Second Avenue Bike Lane Project a year ahead of schedule.

These people put long hours into this project, including staying out all night during the weekend of construction.
Throughout the life of the project, they were constantly coming up with new and innovative approaches to addressing challenges.

Please join me in acknowledging their hard work.

Indeed, bravo! The work was tragically ten days too late to help Sher Kung, but it was a year ahead of schedule. It was also a sign that Seattle is not going to keep sitting on its hands when it comes to increasing bike access and safety, and a sign that when given the green light our city’s transportation staff can rise to the occasion and make it happen. 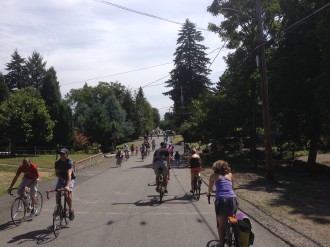 At Sunday Parkways. Residential streets packed with people of all ages and abilities

Seattle’s Summer Streets events are a lot of fun, with the city closing a few blocks of neighborhood commercial streets to host a street party. And Bicycle Sunday is a classic and pleasant car-free experience on Lake Washington that has been running since the 1970s. But what if we combined the two ideas?

That’s pretty much what the mayor proposes in his budget. By adding an extra $324,000 annually to the existing Summer Streets budget and noting that the city will seek private sponsorships to help increase the budget even further, the mayor hopes to “[take] the success of Lake Washington’s Bicycle Sundays to other parts of the City,” as he said in his budget speech.

This likely means learning from Portland’s extremely successful Sunday Parkways events by expanding Summer Streets to include car-free connections to area parks and other neighborhood destinations during the weekend afternoon.

About 30,000 people came out for Summer Streets, which is impressive. But if Portland’s success is any indication, the city could get that number (or more) in a single event if it included more car-free space.

Earlier this year, Seattle Neighborhood Greenways lead Councilmember Sally Bagshaw and some other city staff on a study trip to Sunday Parkways in Portland (see our report here). Needless to say, it was inspiring. Next summer is going to be awesome.

The mayor’s budget also includes an additional $2 million for building missing sidewalks (mostly in the far north and south ends of the city). It also adds $3 million to street paving.

The Neighborhood Street Fund also gets a $1 million boost. The NSF allows community groups to identify needed improvements in their own neighborhoods, which often includes shoring up a dangerous crosswalk or completing a needed pathway.

Murray also proposes adding $742,000 annually to the ADA program, fueled by funds from the city’s school zone speeding cameras. The investment would “to support an ADA transition plan and an ADA strategic advisor to promote accessibility and safety for pedestrians,” according to the budget document.

And remember the Fauntleroy green boulevard project we wrote about Monday? Murray’s budget includes $500,000 to complete design work for the project.

If you want to dig through the budget, download it from the city’s website here. If you find anything you think we missed (or noticed anything interesting), let us know in the comments below.