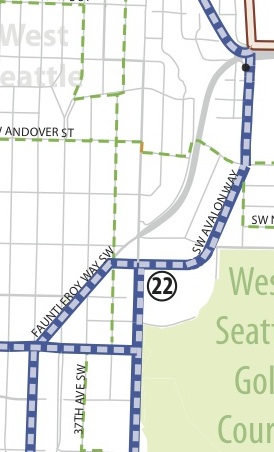 From the city’s Bike Master Plan, this stretch of Fauntleroy is a key connection.

Plans for a very-much-needed remake of a key section of Fauntleroy Way SW in West Seattle are moving forward, and the city is looking for input.

There will be a community meeting to discuss the project Tuesday, 5 – 7 p.m. at the Senior Center of West Seattle (4217 SW Oregon Street). If you cannot attend, send your thoughts to [email protected].

The project is less than a half-mile long and stretches from SW Alaska Street to 35th Ave SW (AKA I-35), but it’s a key stretch in a fast-growing part of the neighborhood. The route would connect nearly to the Junction from Avalon Way, a well-used bike commute route. The Bike Master Plan calls for protected bike lanes on Fauntleroy, Alaska, Avalon and 35th, so this stretch could be the first and a key central piece in the neighborhood’s future low-stress bike network.

Project design has also come a long way since 2012, when early design did not include any bike lanes, let alone the type of protected bike lanes needed to make the street comfortable for people of all ages and abilities to use to get around the neighborhood to or to regional and commuter bike routes.

Though the project is short, the street essentially feels like an entrance to the neighborhood. While today it is extremely wide and feels hostile to anyone outside a car, the project hopes to create a more welcoming atmosphere while still moving all the different people using different modes to get around. This includes building a new planted median (where left turn lane is not needed) and new planting strips separating the bike lane and sidewalk from motor vehicle traffic.

The project has long been pushed my City Councilmember Tom Rasmussen, who lives in West Seattle and is chair of the Transportation Committee. Design is on schedule to reach the 60 percent design point by the end of the year, but additional funding will be needed to finalize design and build it. (UPDATE: Mayor Ed Murray’s proposed budget includes $500,000 to complete design work). You can learn more the project website or, as always, by following coverage at West Seattle Blog.