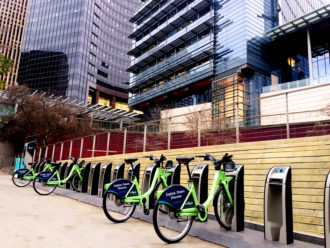 This officially ends a frustrating era for bike sharing in Seattle, making the city one of very few in the world where a modern public bike system has failed.

Some of the $5 million currently allocated for bike share expansion will go to decommissioning the current Pronto system and in case the city needs to pay back any grant money. In the meantime, the city will try to sell the equipment, which still functions very well, to recoup costs.

About $3 million of the funds will go to Safe Routes to School and other 2017 biking and walking projects in the downtown area, including bike lanes on 4th Ave, planning for bike lanes on Pike and/or Pine, and accessible curb cuts in Pioneer Square.

Mayor Murray scrapped the bike share expansion plan before it ever went in front the City Council for approval. In an election year, perhaps the Mayor didn’t want this hanging over his campaign. But now he has a failure on his hands, which may not be much better.

“While I remain optimistic about the future of bike share in Seattle,” Murray said in a press release (see in full below), “today we are focusing on a set of existing projects that will help build a safe, world-class bicycle and pedestrian network.”

Rather than rehash how we got here (read up in this previous post), I’ll just reiterate that it didn’t need to fail like this. The idea of a system of public bikes that anyone can use to expand access to express transit service and fill gaps in the existing transportation system is still sound. Increasing people’s access to a working bicycle (one of the major barriers to cycling) is still a very worthy goal.

Pronto was a small start to create such a system that was never expanded to the size needed to succeed. The city’s efforts to buy and expand it were fumbled and lost. By the time expansion talks started in earnest, the public narrative about bike share was that it was a failure. Without an engaged constituency fighting for the system (people had already shown up to City Council twice to save it), it fizzled out politically.

While Mayor Murray was out front and visible when the system launched in October 2014, his leadership was nowhere to be seen when times got tough and hard decisions needed to be made. As the city’s executive for the launch and death of this system, the buck stops with him.

It is also poor timing for Seattle to abandon bike share right as Vancouver and Portland are launching their systems. Where once Seattle was the only large Pacific Northwest city with bike share, it will now be the only one without it.

It’s hard to write this post since it’s a major failure of something this blog has advocated in favor of heavily for many years. I believed in Pronto, and now I fear the well may be poisoned for bike share. I hope I’m wrong.

In the meantime, prepare to go back to praying for an open bike rack space on that express bus you’re waiting for. And stop looking forward to the day you can just hop on a public bike to head over to Fremont or the Central District.

We should all give a shout out to the staff on the ground at Pronto, who have done a great job rebalancing bikes and maintaining the equipment these past few years. Thank you.

So get out there and ride Pronto while you still can. Thank a Pronto worker if you see one. And if you know anyone looking to buy hundreds of used bicycle helmets, put them in touch with City Hall.

Below is the full press release, which frames the shutdown as a win for biking and walking funds (as though Seattle can’t have safe streets and public bikes to ride on them at the same time). The release is complete with cheers from Cascade Bicycle Club and Seattle Neighborhood Greenways:

“This shift in funding priorities allows us to make critical bicycle and pedestrian improvements—especially for students walking and biking to school,” said Mayor Murray. “While I remain optimistic about the future of bike share in Seattle, today we are focusing on a set of existing projects that will help build a safe, world-class bicycle and pedestrian network.”

The funding will go to the following projects:

Adding pedestrian safety improvements, including traffic calming and crosswalk improvements at 19 schools through the Safe Routes to School Program.
Completing a missing link of the 4th Avenue bicycle lane and extension to Vine Street.
Accelerating design and outreach for the east/west connections in the Center City bicycle network.
Improving accessibility in Pioneer Square by adding curb ramps at key locations.

These projects are scheduled to begin in 2017.

“I’m thrilled Mayor Murray has renewed his commitment to safer routes to school! Any investment in safe routes is a good investment in our children’s health and in Seattle’s future,” said Cathy Tuttle, Executive Director, Seattle Neighborhood Greenways. “Mayor Murray’s targeted spending on a downtown bicycle network is also a bold statement that Seattle values safe streets for all people, whether they choose to get around by walking, riding a bike, or in a vehicle. Great choices for a healthy Seattle, Mr. Mayor!”

UPDATE: Councilmember Lisa Herbold, who has opposed bike share, took a victory lap in a press release of her own:

“This was absolutely the right call. With limited public dollars, these resources are better used to develop safe routes to schools for our students. Now is not the time for public investment in a bike share system.

“I’m glad to see these funds are proposed toward implementing the City’s Bicycle and Pedestrian Master Plans, and School Safety projects, in line with my proposal last year to re-direct $4 million in funding away from expansion of the Pronto system toward these existing needs. I regularly hear from constituents about school crossing safety, most recently regarding Genesee Hill Elementary.

“During last year’s budget cycle, I sponsored a budget action the Council adopted to remove $900,000 in funding for operation of the Pronto system in 2017 and 2018, to preserve funding for these existing needs.”