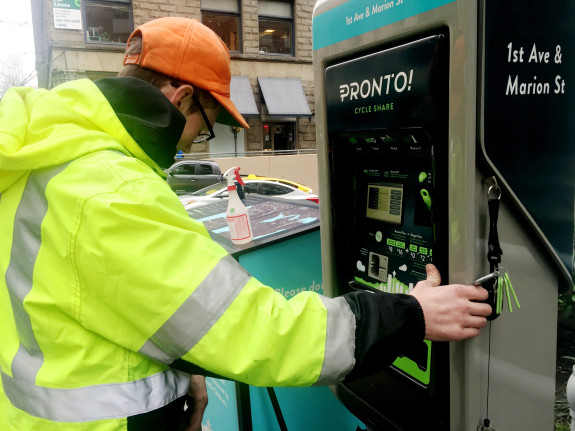 When you go to check out a Pronto Cycle Share bike, you probably only see the bikes and docks. You beep a bike with your key fob or swipe your credit card at a kiosk and a bike unlocks. You ride it to the station closest to your destination, push it into the dock and “beep,” it locks and disappears back into the bike share system.

But this doesn’t happen by magic. It takes a team of smart people working behind the scenes for system operator Motivate to keep Pronto so safe and easy. As the Seattle City Council prepares to vote Monday on whether to buy the system, the debate has largely ignored the value of the trained and inventive staff working every day to get better and better at running a bike share system uniquely designed for Seattle.

The Council will vote during their 2 p.m. meeting Monday, and you can testify to support the buyout plan at the start of the meeting (sign up before the start of the meeting).  Under the plan, the City would buy the system, and Motivate would continue operating the system while the city requests bids for an expansion (presumably, Motivate will be among the companies bidding on the contract). 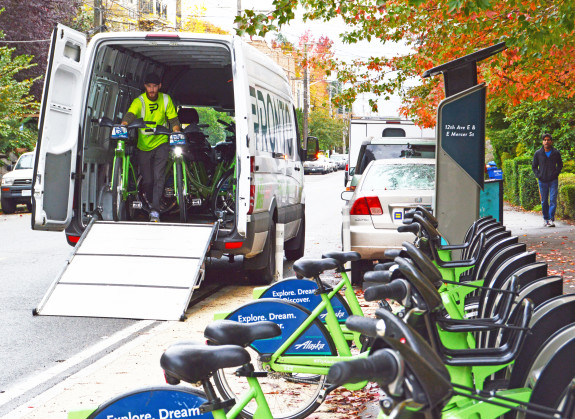 It’s hard to put a dollar amount on the value of having a fully functional system up and running because there are so many small-but-vital pieces that make it happen. It’s easy to say that the docks and bikes are worth so many dollars each, but what is the value of having a dedicated staff who have spent more than 17 months learning how it all works and how to fix it?

Puget Sound Bike Share’s assets are valued at $2.1 million, and the city would get it all for $1.4 million (bringing the city’s total bike share assets to 3.1 million). That’s a pretty good deal. But even that deal downplays the real life value of having a system already operational, with an existing user, sponsor and partner base.

It’s a mistake for the City Council’s cost-benefit analysis to ignore these elements. Because if you spend a day with Pronto staff, you’ll be amazed how many small problems they have figured out and how efficiently they run the system. You’ll see that the deal the city is getting on this system is a steal.

There’s the big, obvious stuff like servicing bikes (they check every single bike at least once every month), rebalancing bikes to prevent full or empty stations, cleaning and distributing helmets (as required due to King County’s rare all-ages helmet law), and maintaining dock functionality.

But there’s also the little things, like figuring out how to prevent mice from getting inside the station kiosks (a problem you wouldn’t think about until it happens) or learning which pedals and saddles last the longest through persistent rain and cold. They’ve found small defects in the equipment and worked with the manufacturers to invent solutions (a big dock upgrade is coming soon to help fix the “dead” docks problem). At this point they’ve got daily bike flows down to such an art that they can “prebalance” bikes well enough some mornings that they only need to do a limited number of rebalancing runs during the day.

“A lot of good things have come from this already, and we’re just over a year in,” said Pronto’s Lead Technician Grant Kahl as we crawled through downtown traffic in the Pronto service van to do some maintenance work on the station at 1st and Marion. “I’m proud of the work we’ve done.”

Before getting temporary work at Pronto, Kahl delivered for Jimmy John’s downtown. He was hired to help with the initial installation of the stations, but he managed to make himself helpful enough that they hired him on. He has been dedicated and worked his way up to the Lead Technician job.

“It’s kind of developed me as a person,” said Kahl, who puts a lot of personal pride in how much he has learned and how well the team keeps up on maintenance and basic system functionality work that users may never even think about.

I asked him about the irony that he has to spend so much time in a car in order to help others bike.

“I like driving,” he said, “but it seems like I go a lot further faster on my bike…You don’t have to pay for parking and you don’t have to sit through traffic on Mercer.”

Not only has Pronto improved people’s ability to get around traffic congestion, but Pronto staff have learned a lot in a short period of time.

“We have a pretty good knowledge base,” he said. “It would be a shame for all that to go down the drain.”

In fact, Kahl believes so much in the value of the work Pronto does, that he keeps telling people there’s no way the city will close it down.

“I feel like at this point we’re part of the community,” he said. I hope he’s right. 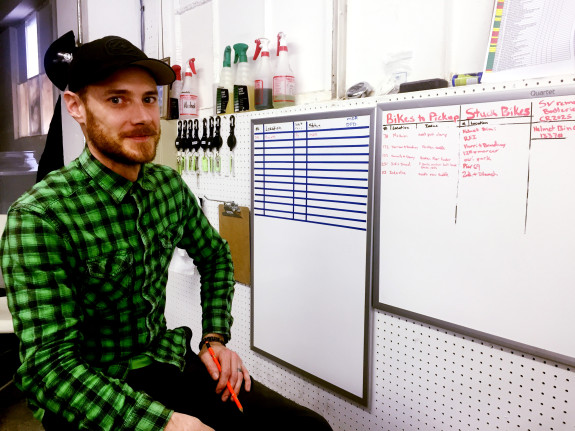 If year one was all about learning how to make the system run efficiently, year two should be about optimizing the system we have and focusing on how the system can grow.

The plan was to expand a little in 2015, but then the city announced their intention to buy the system and dramatically expand it using federal grant funds (they did not win the competitive grant). Work to gather more sponsors to fuel that expansion was put on hold and the system’s non-profit owner Puget Sound Bike Share worked instead on transferring ownership to the city.

But that buyout got delayed for months, then PSBS staff quit as the non-profit started disbanding. Now the Council’s decision comes with a deadline looming before PSBS defaults on a loan and the system closes down. You can read more about how Pronto got into this financial trouble in our previous story. 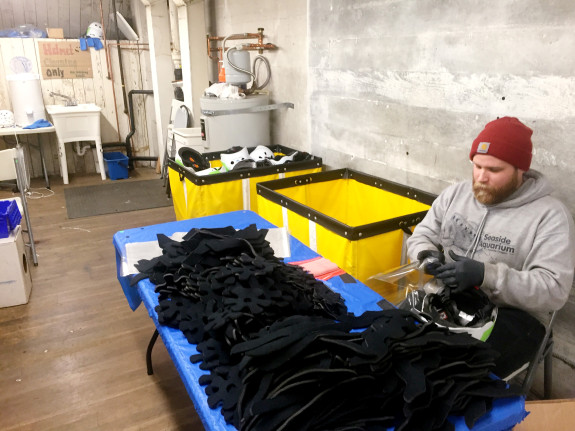 Ben Bryner checks helmets for wear and cracks, then cleans and preps them to go back out. Helmets typically get about 50 uses before they are retired.

The Pronto staff has made it through the hard work of getting the system up, learning how to keep it running, and forming valuable partnerships with employers, hotels, building managers and businesses that will only grow as the system matures.

To date, Pronto has partnered with over 40 companies and organizations on campaigns and promotions. 55 employers have corporate memberships in which they provide staff discounted or free memberships (1,400 members have signed up through their employers).

“It would take a lot of time and work to restore [these relationships], especially their trust,” said Marketing Manager Shae Healey.

While all this uncertainty with the city’s buyout has made it difficult to secure sponsors and partners, it has also made it harder to get new annual members or to convince expiring members to renew. After all, few people are going to pay for a year if they aren’t sure it will be in service that long.

SDOT and City Council analysis of the Pronto budget has shown that a city-owned Pronto would run about $115,000 over budget annually assuming no new stations and no growth in memberships, rides, sponsorships and other forms of income. But of course those revenue sources will all grow. It’s not an insurmountable budget gap. 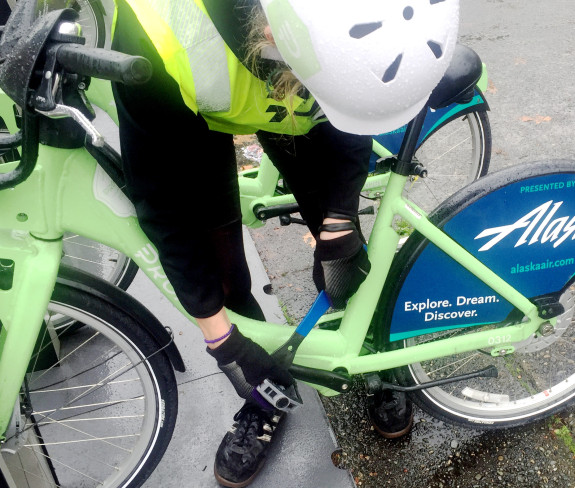 Mechanic Luna Breed checks bikes in the field. Mechanics bring tools to fix what they can on the spot. Bikes with bigger issues are flagged and hauled into the shop.

Pronto General Manager Demi Allen is excited about the future of bike share in Seattle despite the dire headlines. Analysis of operations data (one of many jobs Danielle Schrimmer handles) and user surveys is already helping them improve efficiency and outreach.

They tried 14 promotional campaigns in year one, giving them insight into where to focus efforts this year (Pronto Week in late April was a smash hit, as was the #ProntoGlam unicorn bike).

Their efforts are mostly focused on “communicating how Pronto can fit into your life,” said Allen (he likes to envision bike share as a “human-powered subway”).

“It’s not a single fix for transportation needs,” said Healey, but bike share works in balance with other options.

As time goes on, more and more people will become familiar with the system and make it part of their transportation mix. And with a year of experience and user building under their belts, Pronto is poised to flourish.

City Council, don’t throw this all away at the first sign of trouble, much of which the city itself caused. We’ve got a great system ready to keep getting better. 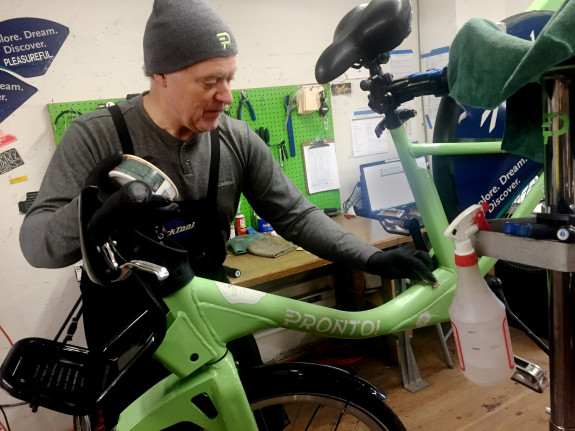