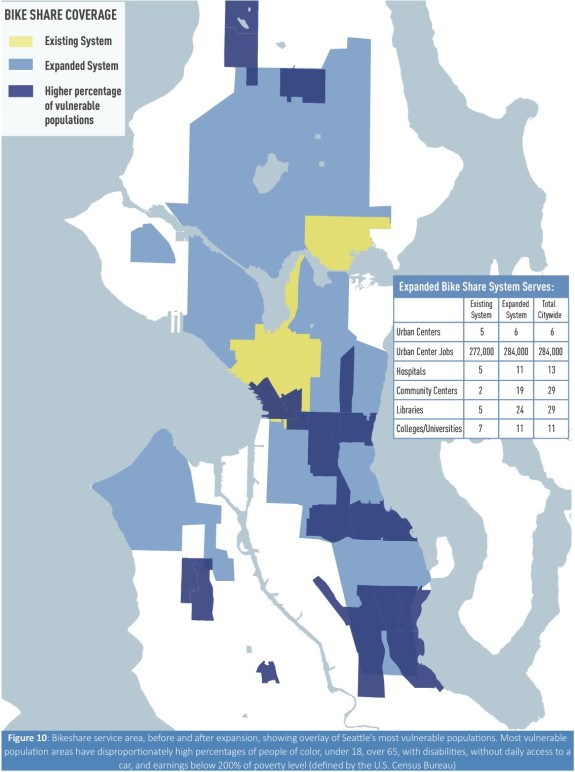 Pronto Cycle Share is an amazing transportation tool, but only if it’s limited service area fills a hole in your specific trip. If you live in the service area, it’s amazing. If you are headed to a city center destination that is an awkward distance from an express transit route, bike share can be a fast and easy way to cover that last piece of your trip.

But the biggest problem with Pronto is that the service area is simply too small to meet most people’s needs. And under the current business model, the system would expand slowly over time as more private sponsorship investments or city budget line items lead the way. It’s a plan that creates solid benefits for relatively little public investment, but it’s not a plan that can truly revolutionize transportation and low-income access to bicycling in Seattle.

That’s why the city has put together a visionary plan for a massive, fast expansion of Pronto that would increase the service area from five square miles to 42 square miles, reaching from Northgate to Rainier Beach to Alki. The number of stations would increase from 50 to 250, and the percentage of Seattle residents within walking distance of a station would go from 14 percent to 62 percent.

“Having a massive expansion of the bike share will make it really functional public transit,” said SDOT Director Scott Kubly. “Bike share is a great way to expand the reach of transit” because it helps connect more homes and destinations within reach of a high-quality express transit route. It’s a way to fill the “last mile” and “first mile” problems of transit trips, where slow local buses or long transfer waits make transit use less appealing and effective.

On top of all this, the city would also roll out electric assisted bikes in the fleet, which will be especially helpful for stations in very hilly areas and for users who have trouble climbing hills or going longer distances.

The e-bikes “will effectively flatten the city,” said SDOT Director Scott Kubly, and “open it up to people of different ages and abilities and different levels of fitness.” Kubly said studies looking at the effect of e-bikes in Norway showed that people took 50 percent more trips and traveled distances twice as far, an effect more pronounced in women.

It’s possible that all 2,500 bikes in the system would have pedal assist power, though it could also be mixed. The city has not identified exactly which maker they would want to utilize for the e-bike system.

“There are a number of manufacturers debuting e-bike bike share systems this year for 2016 launches,” said SDOT Spokesperson Norm Mah. “We are watching all of them to see what makes the most sense. There is an argument both for having 100 percent e-bikes for consistency, as well as for less to accommodate those that want to pedal.”

The grant application also includes the $15 million needed to fill a funding gap for the Northgate bike/walk bridge. We have reported on the Northgate bridge several times, and the details have not changed significantly. See our report from last year for more.

TIGER grants are extremely competitive, and the city did not win the requested Northgate bridge money during the 2014 cycle. But city leaders think they have a really strong application this time around.

“TIGER is exactly the kind of funding source that you would want to use for this,” said Kubly, noting the focus on access to community colleges meets up with many of the national governments goals. “We think we’re putting in a really competitive grant.”

The bikeshare expansion will increase the population with ready access to bikeshare from 88,678 to 392,625 and increase the catchment area of frequent transit by 342%.

While the Northgate bridge would dramatically increase access between North Seattle College and the under-construction Northgate light rail Station and mall, bike share would enhance the value of this connection even further. 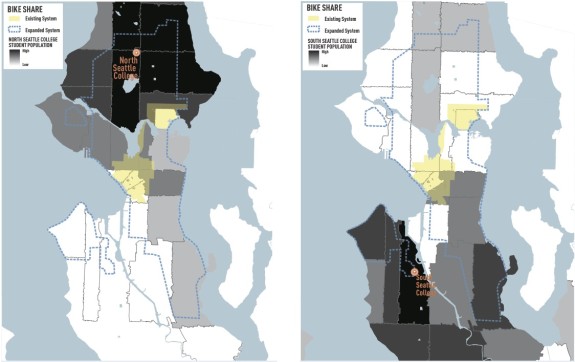 When looking into the value of the Northgate bridge to connect to North Seattle College, SDOT officials noticed that “South Seattle College doesn’t have great access to transit, either,” according to Kubly. In fact, the closest “high-frequency” bus stop at Delridge and Juneau is 1.5 miles from the college. So the bikeshare system also includes connections between South Seattle College and quality transit service on Delridge. That 28 minute walk would take seven minutes on Pronto, according to the proposal.

The University of Washington already has Pronto stations, since it was part of the initial launch. But expanding the range would certainly make those stations much more useful. Today, they are used far less often than the center city and Capitol Hill stations, likely a result of how disconnected those stations are from the rest of the system and the fact that students may not have the cash to buy a membership.

Which brings us to the next brilliant piece of the Pronto expansion plan: Half-price memberships for college students as well as people who qualify for the reduced cost ORCA Lift program. People making less than 200 percent of poverty qualify for ORCA Lift, which lowers King County Metro bus fares to $1.50. 120,000 Seattle residents between the ages of 18 and 64 currently qualify for this program. Assuming the annual pass price remains $85 (the city is researching whether to change the rate system), qualifying people could score a year of system use for only $42.50. To steal from a joke Kubly told during a recent talk, regular users make that money back in reduced wear on their shoes.

The city also hopes to help homeless people access the system by “building on successful programs from other cities such as a program in Washington DC, which donated bikeshare memberships to homeless people to assist with getting to and from appointments like job interviews, classes and training.”

The expanded system will also create 35–40 full-time equivalent jobs. The city will also partner with Bike Works to create youth apprenticeships for 8–10 young people to get work experience maintaining the bikes and stations.

Racial and economic diversity among bike share users has been a problem for systems across the county, though evidence shows that lower-income populations are more likely to mix biking and transit use, according to the grant application:

Since 2001, bike-to-transit connections have grown fastest in lower-income groups. Percentage gains have been more than twice as large within lower income groups compared to higher income peers (earning over $75,000 per year). The largest percentage increases of any group was for the lowest-income users (earning under $25,000 per year). Expansion of bikeshare, paired with extension of Link Light Rail, and discounted bikeshare memberships (using ORCA Lift as a model) will provide residents in Northgate and other economically disadvantaged communities increased access to jobs and education throughout the region.

One major problem with bike share systems under the current Pronto model is that the need for the system to fund its own operations requires slowly expanding to areas where either a sponsor wants to fund a station or where high density of destinations assures a very high use rate. This often means that stations will be cited in economically advantaged areas and work best for people who are already well-off. Or, as Charles Mudede put it in a story for the Stranger: “Money follows money.”

The only kind of planning that can break with the automatic effects of the market has to be entirely public. It has to be deaf to the tireless call of money. If Pronto was fully funded by the public, it might have avoided reproducing the racial/economic map of our city.

Seattle certainly isn’t going to a fully-public model for Pronto. Sponsorships will continue to be important. But the city does want to go a very different direction from the purely market-driven model by siting stations within lower-income neighborhoods where access to a working bicycle is often a huge impediment to cycling and where access to high quality transit often requires long walks or slow local buses. Any transportation system, whether it’s roads for cars or a transit system, requires more subsidies for lower-density areas. But providing access to transportation is important for everyone. Why should bikeshare operate differently? The grant application puts it this way:

TIGER funds for a major expansion will offer Seattle the opportunity to introduce bikeshare to low-income communities throughout the city, siting stations based on the community’s need for low-cost active transportation modes. This approach is contrasted with a slow, decades-long expansion plan where each new station must be sited with short term return-on-investment as a primary criterion.

SDOT also hopes that Pronto pass holders will be able to access the system using their ORCA cards, though this would likely not include being able to pay for short-term passes with e-purse money or transfer to/from transit (my dream for the system).

We will find out in September if the city wins the TIGER grant. It’s also possible they will win only some of the requested funding, which would obviously change the scale of the roll-out. If the grant is won, the new stations could start rolling out in 2016 with all stations operational by the end of 2017.

Though this grant would grow the system to 250 stations and 2,500 bikes, the city hopes to continue growing the system beyond 400 stations in future phases. The grant assumes the existing stations will not be compatible with the e-bikes, so funding for replacements is included.

Part of the grant process includes a benefits-to-cost analysis of the projects. The bikeshare element alone is calculated to return 3.3 times it’s costs, mostly in the form of increased health of users and reduced car trips.

Part of the expansion plan could also see Seattle taking a more direct role in the operations of the system, though “that’s something we want to have a conversation with the folks at Pronto about,” said Kubly. Today, the system is owned by a non-profit called Puget Sound Bike Share, which is a partnership of many local governments and private organizations. PSBS contracts with Motivate to operate Pronto. The TIGER grant notes that the city may contract directly with Motivate instead.

Concurrent with the submittal of this funding request, Seattle is working to contract directly with the operator of bikeshare as opposed to having a third party non-profit contract with the operator. This proposed business model is consistent with that of successful systems in large cities across the country. The specific terms of this agreement are under negotiation.

Before being hired as SDOT Director, Kubly was acting President at Alta Bicycle Share, which was bought by Motivate last year after Kubly came to Seattle.

You can read the full application and the letters of support from a long list of government, non-profit and private organizations on the project website.