Happy first birthday, Pronto! A look at use and how the bike share system can grow 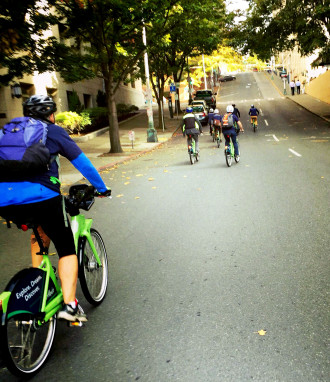 Since then, people have used the bikes to complete 144,000 trips, traveling 335,694 miles. That’s the equivalent of biking around the equator 13.5 times or biking to the moon and making it half way back.

That’s a whole lot of bike sharing, and puts the Seattle system about on par with the first year of use in Denver, a step behind the Bay Area system and quite a bit behind DC.

Stephen Fesler at the Urbanist crunched the numbers a bit further this morning:

Breaking those numbers down further, we find a mix of good and less-than-good numbers. For instance, the average bike station saw 512 customers purchase short-term passes and the network generated 935 miles of bike riding daily. Meanwhile, 144,000 trips were made on Pronto bikes throughout the year, but if you parcel that out on a per bike per month basis, that comes down to 24 trips. In context though, that’s within a range closely mimicking peer systems in Denver and San Francisco.

Additionally, that first data point in the list above suggests that the bike share system is meeting a key target — the 30-minute target. With average trip time at 19.05 minutes, most users are not exceeding the 30-minute threshold at which additional charges kick in for each half-hourly block. Bike share is predicated upon the concept of rotating bikes throughout the system as quickly and as balanced as possible. This helps realize a primary goal of ensuring that bikes remain accessible to users at most locations in the system and on demand. 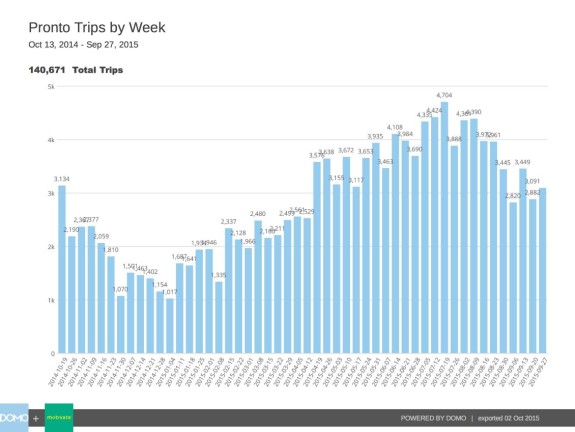 Graph of weekly Pronto use as of late September, from Capitol Hill Seattle.

Here’s a fun birthday video from the Pronto team:

As the Urbanist notes and as you might expect, membership levels are strongest in areas that have stations. That’s one reason why the city’s plan for a major system expansion makes sense for attracting more users.

As we have reported, Mayor Ed Murray has included a one-time investment in his proposed 2016 budget to expand Pronto. Hopefully, that investment will get some help from a pending federal TIGER grant proposal. If fully funded, Pronto stations could be within an easy walk of 62 percent of Seattle residents. Today, only 14 percent of residents can easily walk to a station.

The city is also looking into options to add electric assist to the bikes, which could make it easier for more users to use them and could maybe even take some of the workload off rebalancing staff who drive bikes to empty stations, often uphill.

City staff may also want to look into changing King County’s rare all-ages bicycle helmet law. While Pronto has done a little better than the system in Melbourne (one of the only other major systems operating under an all-ages helmet law), usage is not as strong as some similar-sized systems in cities without helmet laws.

Major systems in denser cities without helmet laws see much more use, of course. New York’s Citibike saw 5.7 trips per bike per day in June, for example. A more reasonable goal for Seattle to chase might be Washington DC’s Capital Bikeshare, which seven years into operations saw 3.8 trips per bike per day in June compared to Pronto’s 1.1. Numbers will likely climb over time as more people learn to use the bikes and become members. Tripling use isn’t an easy goal, but it’s also totally achievable, especially with an expansion of the service area.

But King County’s helmet law is one likely factor holding the numbers down. The original business model assumed a reduction in use due to the helmets, and maintaining and cleaning the helmets and bins adds cost to the system other cities skip. To date, bike share systems in the US have proven remarkably safe, and there’s no evidence that helmets are needed to protect users. As reported last year, no US bike share user had died in 24 million trips, mostly in cities where few users wear helmets (I am not aware of any deaths since then, though I don’t have more recent data).

We have suggested several times that King County should ditch the helmet law for adults, or at the very least make it a secondary offense so police are not stopping and ticketing people just for choosing not to wear a helmet. That’s not a good use of police resources, but Gene Balk and the Seattle Times reports that 2,500 tickets have been given for bicycle helmets since the law went into effect in Seattle in 2003.

There are far better uses of police resources than ticketing an adult choice that is perfectly legal in nearly every other big city in the world. The question isn’t whether you think people should wear a helmet, it’s whether you think we need to actively police that choice. Most of the tickets were given by just three officers, suggesting that nearly all of the SPD force already agrees adults not wearing a bicycle helmet are a low priority.

But besides helmets, there are other challenges to bike share in Seattle, as former Puget Sound Bike Share Executive Director Holly Houser told the Wall Street Journal:

Holly Houser, Pronto’s departing executive director, acknowledged that the helmet law “can be a deterrent, because there is a perception that if you have to wear a helmet to ride a bike, then biking is dangerous.”

But Seattle’s steep hills and patchwork bike infrastructure are stronger factors than the helmet law in putting off casual riders, she says. “You combine the topography with a lack of protected bike lanes, and helmets become that much more important,” Ms. Houser says.

A connected network of comfortable and safe bike routes is the biggest missing piece to a successful bike share system in central Seattle. Expansion is smart for making the system more accessible by more people, but the existing central core will never fully success until bike routes are high quality and connected. Few people want to mix with busy traffic on Pike Street downtown or Jackson Street between the International District and Pioneer Square. Until these and many other gaps are closed, use will be limited just to those brave enough to bike in downtown traffic.

15 Responses to Happy first birthday, Pronto! A look at use and how the bike share system can grow