Pronto Cycle Share launches: What you need to know + Updates 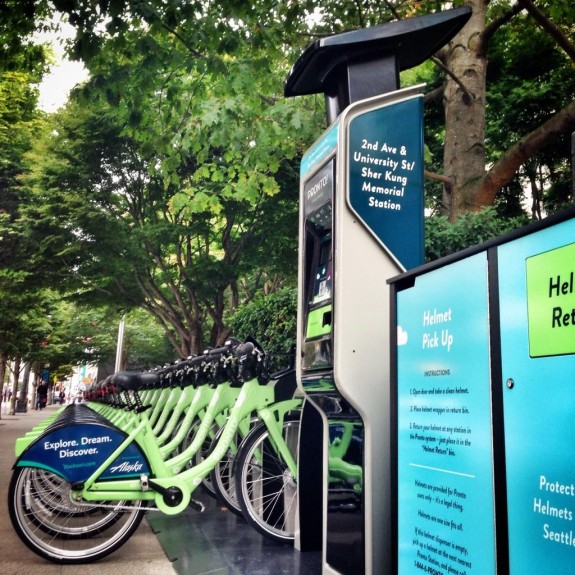 Today is the big day. Pronto Cycle Share is scheduled to unlock its docks at 1 p.m., thus introducing an entirely new public transportation system to the streets of Seattle.

Seattle will be the first major Pacific Northwest city to launch a modern public bike share system, which allows people 16 and up to check out a bike for short, one-way bike trips around the city center and the University District.

While Portland and Vancouver, B.C., balked at launching their systems, Mayor Ed Murray put his full support behind the system to get it launched in 2014. It was an ambitious goal that required pulling together a whole lot of pieces, including bringing on Alaska Airlines as the major system sponsor and forging a new supply chain for the bikes and kiosks themselves after Alta Bicycle Share’s old supplier Bixi went bankrupt.

Crews have been working hard in recent weeks to install the 50 stations and build up the 500 hill-climbing and rain-ready bikes that make up the system. Meanwhile, annual membership numbers have continued to grow, and Pronto expects about 1,000 members by launch time.

The system will kick off with a media event in Occidental Park at 11 a.m. Then members who signed up will get the chance to be the first to ride the bikes, moving them from distribution sites to docks around the city at noon.

Many bikes have already been distributed to station docks around town, but the stations will remain locked until 1 p.m. Annual members receive key fobs in the mail that they use to check out a bike, giving them unlimited 30-minute rides. After 30 minutes, you’ll be charged $2. After an hour, you’ll be charged $7. You can always dock, then wait three minutes and undock the bike to get another free 30-minutes if you need more time.

You do not need to be a member to use the system. Anyone with a credit card can also simply swipe their card at any station to buy an $8 day pass or $16 3-day pass. At least for the first couple months, clean helmets will be available at each station to check out for free.

First off, if you signed up early to be a member (either August 25 or 26), you must log-in online and accept the updated terms and services before you can use it. Your key will not work until you do this. If you log in and there are no notifications telling you about the terms, then you should be good to go. 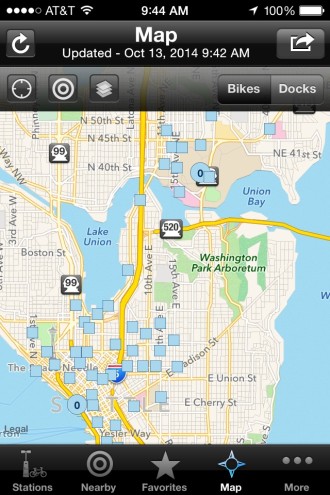 Pronto is now part of the Spotcycle app available for Android and iOS.

The app shows station locations and, once the system launches, how many bikes are available at each station.

You can also bookmark the station map, which will show the same information in any browser.

If you use the Transit App, which shows real-time transit arrival data and helps with route planning, you have probably noticed that that app also now displays Pronto station data. This is a brilliant move to help people combine transit and bike share to get around town.

We will update this post throughout the day. However, I am not actually in Seattle today (I’m in St. Louis visiting family and friends), so I could use your help covering the launch and hearing your initial thoughts using it. So let us and everyone else know how your first ride went in the comments below. If you have any good photos, email them to [email protected]. And, of course, check back throughout the day for updates.

UPDATE 11am: City leaders and folks central to the launch of Pronto rode the bikes down to a media event in Pioneer Square. 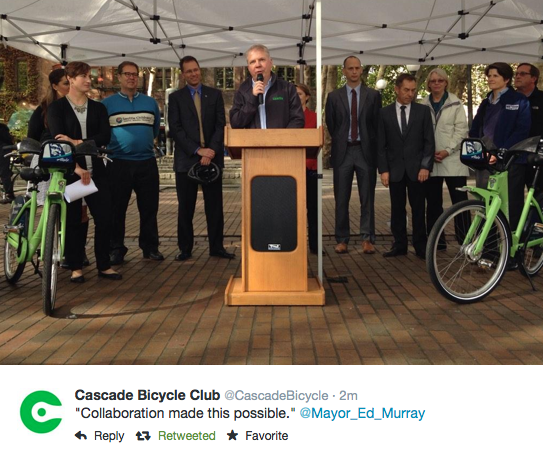 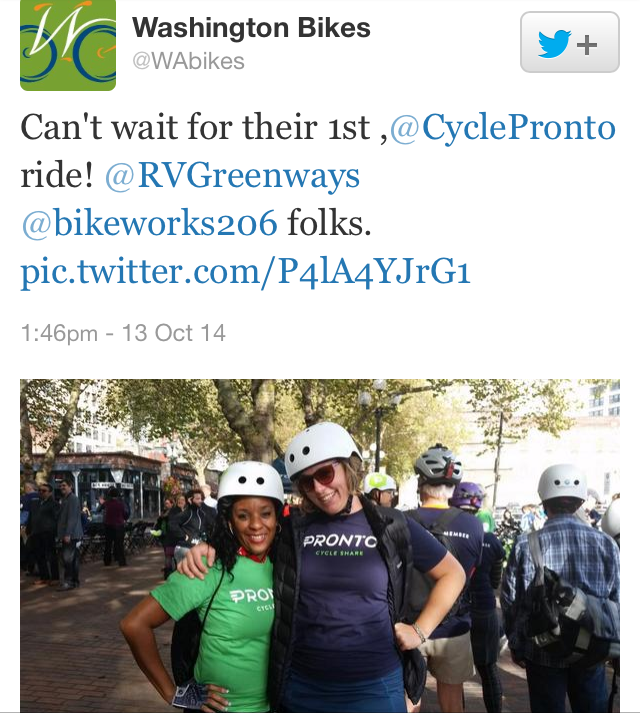 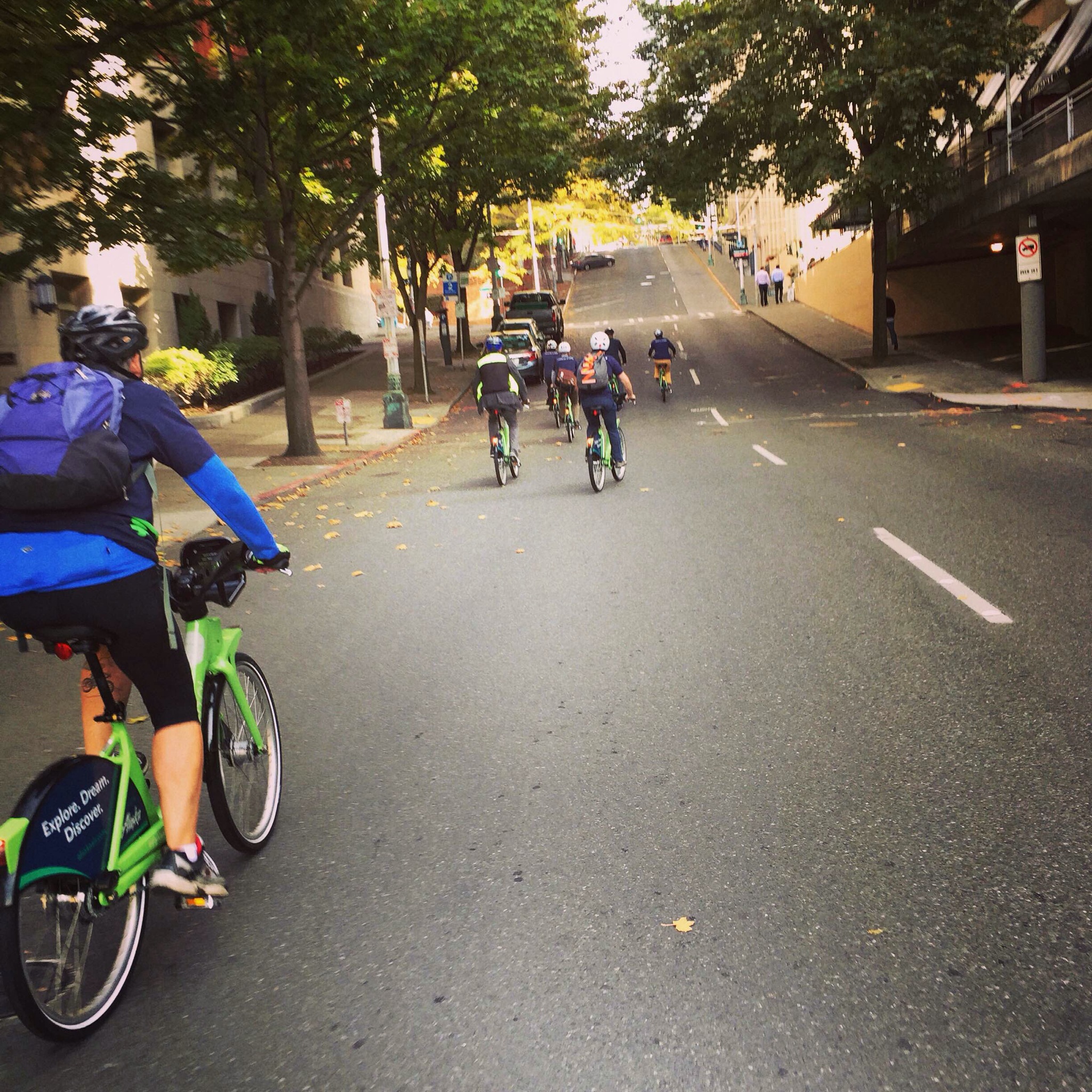 52 Responses to Pronto Cycle Share launches: What you need to know + Updates