I test ride a Pronto bike (and yes, it can climb hills) 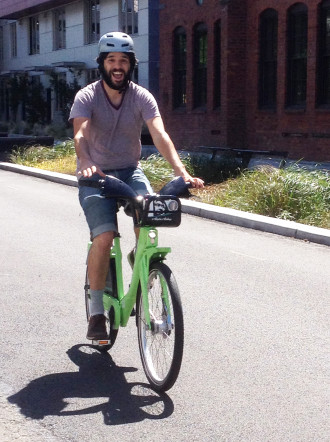 Pronto Executive Director Holly Houser took this photo of me trying out the Pronto prototype.

Pronto Cycle Share has a couple prototypes of the 500 public bikes they will put into service around the city center and the U District in September, and I had the chance recently to test one out.

The bike is the product of a new supply chain for Alta Bicycle Share, who used to get bikes through the now-bankrupt Montreal-based company Bixi. The Pronto bikes are made by French bike maker Arcade, but look and function much like bikes in other Alta systems like Citi Bike in New York, Nice Ride in Minneapolis and Capital Bikeshare in DC.

In essence, the Pronto bike has an easy learning curve. You sit upright in a comfortable position, and the seat height is easy to adjust to fit people of many sizes (there are even numbers marked on the seat post so you can easily set it at your preferred height on any bike you get).

The bike has fenders to help keep riders dry and bright front and rear lights that are powered by the bike’s movement and turn on automatically. A chain guard keeps your pant leg from getting caught and ripped and a bungee-cord holds bags and other items of various sizes in a front “basket” (really more like a U-shaped cargo holder). 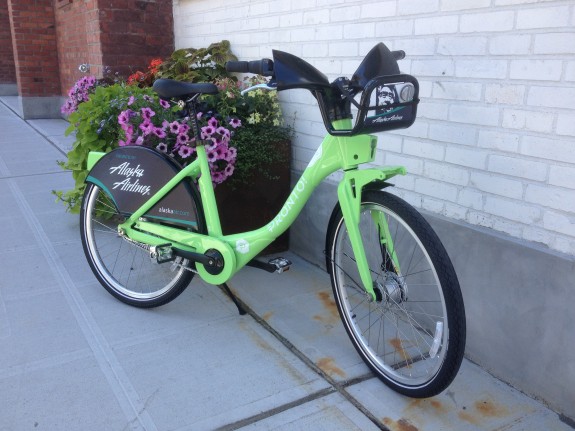 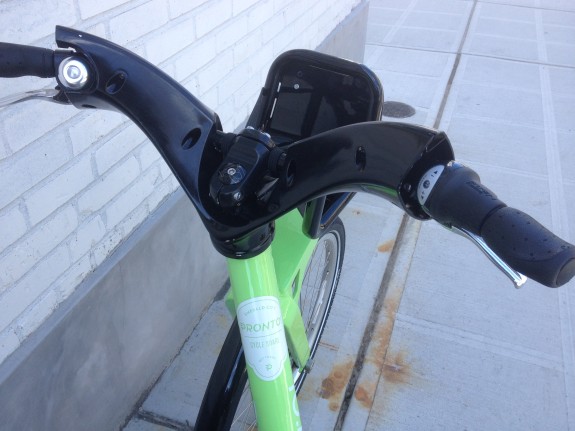 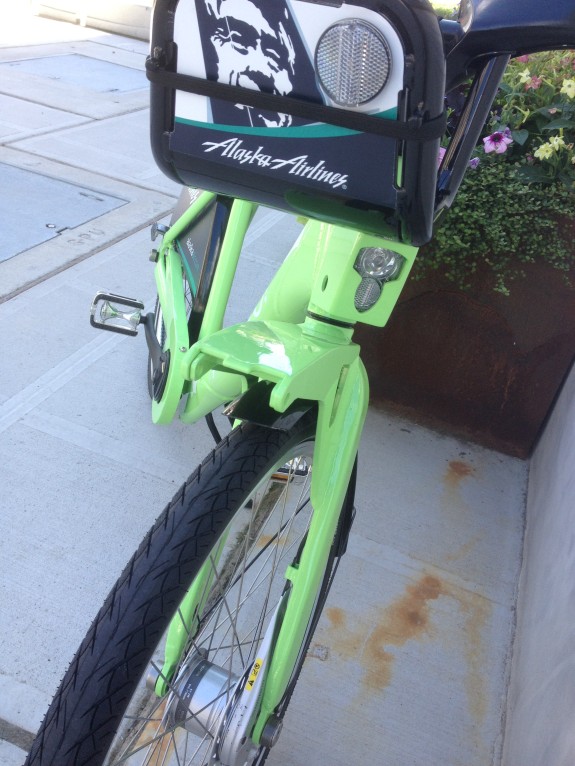 A few details will change between the prototype and final models. For example, the carrying space on front will likely get some design tweaks and get an easier-to-use bungee cord, and the color will be more of a rave green than pastel.

Unlike bike share bikes in many other cities, Pronto bikes will have 7-gears instead of 3 (the extra low gears will help climb hills). The bike has internal shifting, which means there is no derailer. This will prevent the chain from popping off during your ride, and it’s one less part of the bike that can break. It also means that you can change gears while standing still (like at a stop light), which is pretty cool for people who do not have much experience biking.

The bike is not exactly light, but it has an aluminum frame and is lighter than bike share bikes in other cities.

This brings us to many people’s biggest question: Can this bike handle Seattle’s formidable hills? I took it up a fairly steep street (Republican between Yale and Eastlake), and the lowest gear was definitely low enough that a lot of people will not have a ton of trouble getting up big hills like Capitol Hill.

Obviously, this bike doesn’t erase hills, and anyone who has trouble with hills on other bikes will have the same trouble with this one. But it does not compound the problem like some of the three-speed bikes in other cities might.

I did not measure the top cruising speed, but I’d say it was somewhere in the 10 mph range for cruising along comfortably on a flat street. Obviously you can go faster if you pedal harder, but this is absolutely not a racing bike. It’s a cruise-across-the-neighborhood bike. 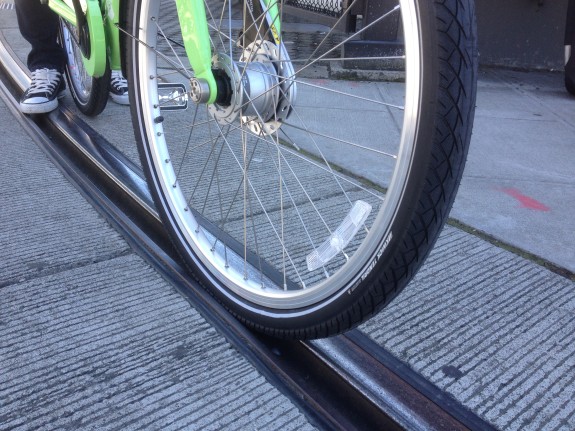 The tires are pretty darn fat and bomb-proof. But in the odd chance that you get a flat, all you have to do is walk it to the nearest docking station, dock it and push a button that tells them the bike needs maintenance (this applies to all other maintenance problems you encounter). The system will then let you take a different bike and will prevent others from checking out the broken one (how cool is that?).

I took the bike over to the South Lake Union Streetcar tracks to see how it handled them, and was impressed. The tires are a bit too fat to fit all the way into the tracks, which can catch and grab most common road bike tires. This can be extremely dangerous, and many people have been injured biking over the tracks.

If you bike almost perfectly on top of the tracks they will grab the tire a little, which is probably enough to cause some crashes. But they are much more forgiving if you are crossing or merging across the tracks, something that is likely to happen often since Westlake is such a desirable and direct route in South Lake Union (we have written previously about the dangerous Westlake streetcar tracks). It is still important to cross the tracks at as close to a 90-degree angle as possible, but my fingers are crossed these wide tires help prevent injuries until the city finally gets around to providing a safe bike facility on the street.

Stay tuned for more Pronto updates this week, including an update on the helmet vending system and some cool news about a grant the city won to increase low-income access.

27 Responses to I test ride a Pronto bike (and yes, it can climb hills)