Pronto submits permits for bike share stations, is on schedule for September launch 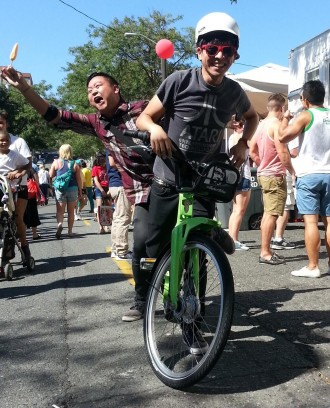 Pronto Cycle Share is moving forward on schedule, and outreach has begun to finalize station locations. The bike share organization has applied for permits for what will be 50 stations, all operational by the end of September.

The Alaska Airlines-sponsored system will launch with 500 bikes in the center city neighborhoods and the University District. If all goes according to plan, the service boundary and density of stations will increase in future phases.

The organization has been getting in touch with nearby businesses to inform them of the station plans, especially for stations that could displace a parking space. As a rule, Pronto is only using on-street stations when there are no good off-street alternatives nearby. Many on-street stations will also be placed near street corners in space where it is illegal to park anyway. This is why a 55-foot station can take only one parking space, as Capitol Hill Seattle reported yesterday.

The station permits do not necessarily mean these are absolutely final, as Executive Director Holly Houser noted in an email: “Station locations shown have been submitted for permit approval where applicable and are not yet finalized.”

Below is a look at those permit locations: 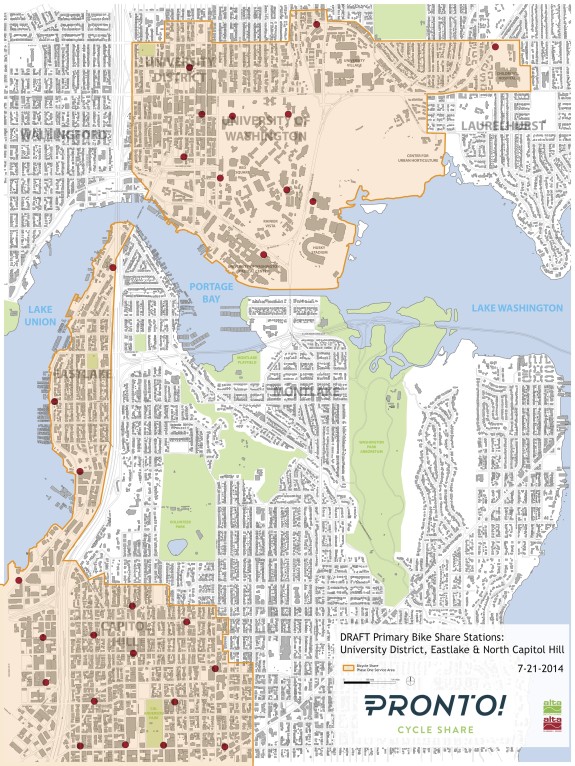 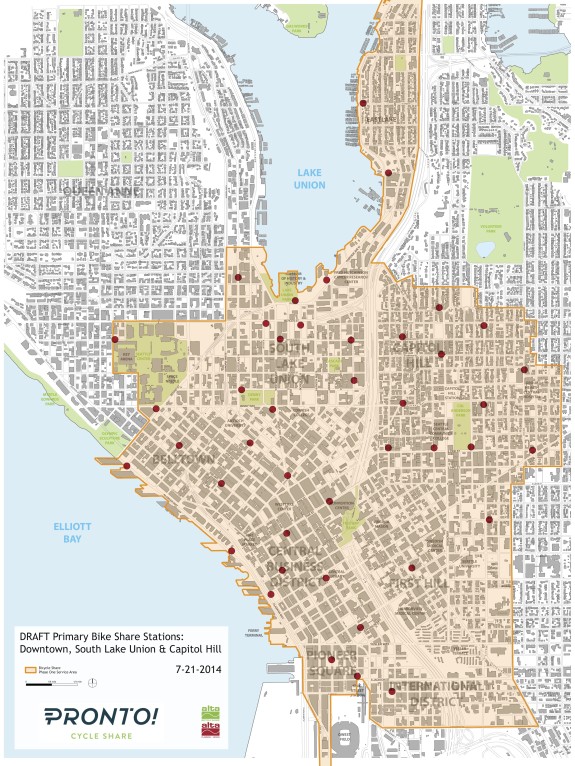 The goal is to have stations close enough together that it is not difficult to find one near you so long as you stay in the service area. 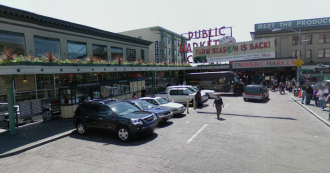 This is the perfect place for a bike share station. Image from Google Street View.

At first glance, there is one omission that leaps out: There is no Pike Place Market station. The closest stations are at Westlake Park and on the waterfront downhill from the market. Pike Place Market was one of the most highly-requested stations in the Pronto Cycle Share feedback-gathering map, but Houser said they had trouble getting one in the market’s historic district due to stringent regulations there.

That seems like a big missed opportunity for businesses in the market, and I hope they find a way to remedy it soon.

To get downtown ready for bike share, the city is also moving forward on a two-way protected bike lane on 2nd Ave from Pike Place Market to Pioneer Square. As we reported previously, that pilot project bike lane is on track to be installed by the time Pronto launches.

A membership or pass gets you unlimited 30-minute bike trips, which is enough time to get to and from most of the bike share stations in the system. The pricing structure is designed to encourage short trips within the city’s dense urban core. If you need more time, you can always check in at a nearby station to renew your 30 minutes. They just want to make sure the bike stays in rotation and that you didn’t lock it up outside a bar or go for a joyride to Golden Gardens.

Launching the bike share system in 2014 and getting 2nd Ave ready for it has been a big goal of Mayor Ed Murray in his first year at the city’s helm. Pronto has a couple demo bikes they are taking around town for outreach events (they are prototypes, and some details like the basket will likely change). Looks like the mayor is ready:

29 Responses to Pronto submits permits for bike share stations, is on schedule for September launch