EDITOR’S NOTE: This story is by Jack Truitt, a UW News Lab student. It is published here as part of a partnership between Seattle Bike Blog and News Lab. 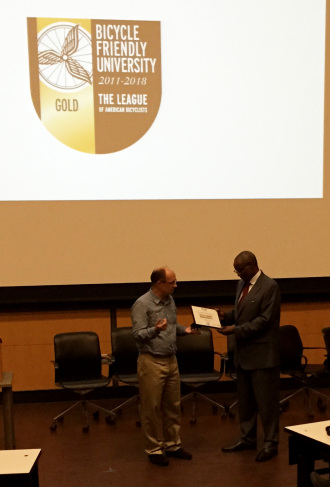 Biking needs to become an issue of climate change and personal health in order to escape the category of fitness hobby, according to the president of a national biking association who was in town last week to recognize the UW as a premier bike-friendly campus.

League of American Bicyclists President Andy Clarke awarded the University of Washington designation as a Gold Level Bicycle Friendly University Oct. 30. He then sat down with a panel of local cycling advocates to talk about how to expand cycling on campus and beyond.

Out of roughly 200 applications this year only six moved up to gold status. UW is now one of ten universities to earn gold, and only two universities have ever earned the highest designation of platinum: Stanford and UC Davis.

Clarke praised the efforts the UW has made since earning the silver level designation in 2012, citing a rare combination of cooperative leadership in state and city politics, and an effective advocacy community at the grassroots level.

“You’ve got all those things in place right now in bucket-loads, that doesn’t happen very often,” he said.  “It may not be two years but two months before you get to platinum.”

Following the award presentation, a panel joined Clarke to discuss the role universities have as catalysts for creating bicycle-friendly communities. The major theme of the discussion was how to shift cycling from something seen by many as a hobby to a normalized mode of transportation part of everyday life. 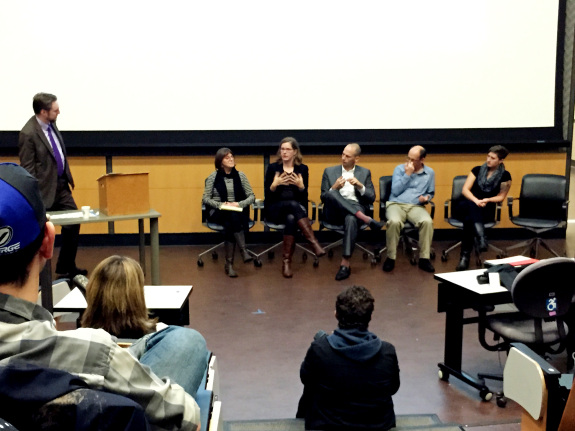 The key to making this happen, Clarke said, was by connecting cycling to broader issues like climate change, traffic and parking congestion and personal health.

“To continue to make progress, we have to relate our issue to things that help other people solve their problems,” he said.

The panel discussed at length the virtues of bike-sharing and its ability to make biking a part of everyday life for the general public, as in countries like Denmark and the Netherlands.

“I think bike-sharing is a gateway drug,” said Seattle Department of Transportation Director Scott Kubly. Like an umbrella that’s there when you actually need it, bike-share stations make cycling convenient without  forcing riders to make the return journey by bike if the weather gets nasty. Pronto, a Seattle-based bike sharing service that launched in mid-October, has ten of its 50 stations located in the U-District.

But those stations have seen some of the lowest usage rates according to Pronto Executive Director Holly Houser, who was a part of the panel. Kubly, who has had experience with bikeshare services in Chicago and Washington D.C., said that below average usage was not atypical of university based stations, calling it “the hardest nut to crack.”

One solution he suggested is including some sort of bikeshare membership in the student fee like many schools, including the UW,  do with local bus services.

Among the biggest hurdles in creating a normalized cycling culture may be the cyclist community itself, members of the panel said. Clarke admitted that the cyclist community perhaps has been overzealous at times, and has failed to generate change and discussion beyond its own audiences, something that needs to change if broader progress is to be made.

Cascade Bicycle Club Executive Director Elizabeth Kiker said it’s important to frame cycling as relevant to everyone no matter their mode of transport, and not an exclusive club that hard-core cyclist culture can make it out to be.

“It’s riding your bike, you don’t have to sign in blood” she said. “You’re part of the tribe if you’ve been on the road.”

With environmental and congestion issues getting worse each day not just in Seattle but cities the world over, Clarke said that we don’t have a choice but to pave the way for more efficient and sustainable transportation.  And its clear which solution he thinks is most viable.

“We’re going to have to get people to bike a whole lot more,” he said. “We’re all in this together.”

Without TIGER, UW searches for other Burke-Gilman funding options

Without a TIGER grant to fund the upgrading of the Burke-Gilman Trail through the campus, UW Transportation Services Director Josh Kavanagh said that funding is currently in redesign. Furthermore, the planned Life Sciences building to be built on campus will likely push the Burke-Gilman project south.

The construction details of the life sciences building lagged behind those of the Burke-Gilman upgrade, he said, but coordination between the two may allow both projects to save some money.

Kavanagh said that the TIGER grant would’ve closed the funding gap on Phase II of the project, and the department currently is looking into the WSDOT regional mobility program for $12.5 million dollars to help fund the $14 million needed for the upgrade. If that were to go through, the remaining $1.5 million would be much easier to find in the budget, he said.

Those who use the trail might wonder why the funding cannot be found in light of the university announcing a $376 million plan to tear down and renovate dorms on campus. The new dorms will have residents paying for the project through their rent.

“I’m not about to throw up a toll booth on the Burke-Gilman,” Kavanagh said.

13 Responses to UW accepts bike-friendly campus award, leaders talk about how to expand biking even further