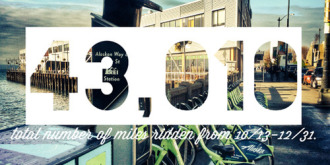 Pronto launched in mid-October, just as the rain rolled in and temperatures dropped. So we do not yet have a clear picture of how popular Pronto will be during peak biking weather, though this time has given the Pronto team a chance to work out bugs in the system.

But even in rainy weather, people have biked a total of 43,010 miles on Pronto bikes. That is equivalent to biking around the equator once, then getting 3/4 of the way around again, just in a bit over three months.

This summer is going to be a big test of Pronto and whether Seattle will fully embrace the concept. It will also be a chance for us to figure out what might be holding riders back, and what effect the county’s rare all-ages helmet law is having on the system. Helmet laws have been known to diminish ridership in bike share systems, though Pronto has tried to lessen this effect by offering free helmet rentals at all stations.

Every station in the top ten most active list is on Capitol Hill or in the city center. No U District station makes the list. This could be because the U District stations are pretty much isolated from the city center (especially since Eastlake is such an unfriendly place to bike), though I am surprised more UW students are not taking advantage of the quick rides around campus. Or maybe they are, but the bustling and dense central neighborhoods simply have far more demand for a quick way to go a short distance.

As expected, it does seem that stations higher up Capitol Hill are more likely to be an origin station than a destination station. This suggests people are more likely to take the bikes downhill than they are to take one up a big hill (though the lack of comfortable bike infrastructure out of downtown could also play a big role. Biking up Pike is a scary experience). But it’s not entirely clear how much elevation plays a role in station use. This would be an awesome data study project for any of you out there who like to do that kind of stuff. Hint hint, wink wink.

Below are some more system stats from Pronto. Notice anything interesting? Let us know in the comments.

So, let’s talk stations. What were the most popular?