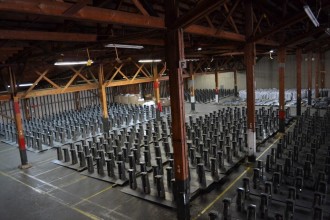 With just weeks to go before 500 Pronto Cycle Share bikes are scheduled to fill the streets of Seattle, workers will begin installing the 50 station docks this week. This is a big step for the bike share system, and it will be a chance for people to start getting familiar with station locations.

Speaking of locations, you can see them on this map.

But one feature won’t be part of the docks: A fully functional bike helmet vending machine to allow people to rent and return helmets with their bike rentals (read about Pronto’s helmet plans in our previous report). Seattle is pioneering the rental system, but it won’t be ready until next year, Pronto said today in a statement.

So until then, theoretically-clean helmets will be available for free from an unlocked bin near each station, and users will be on the honor system to return the helmets to the “dirty” bin when they are done with them. Pronto workers will clean and inspect the helmets before restocking the clean bin.

And if you sign up for an annual membership, you’ll get a voucher for a free Pronto helmet of your very own from REI. So while it’s not clear how well the unlocked bin thing is going to work, there will definitely be a whole lot of new helmets going around Seattle next month.

We have argued that Seattle/King County should ditch or at least modify its increasingly rare all-ages helmet law to help ensure the success of Pronto. Or at the very least SPD could downplay enforcement of the law as a primary offense. Very few big cities in the entire world have all-ages helmet laws, and those that had them are ditching them (or modifying them to only apply under 18) to make way for bike share systems.

After dozens of millions of rides in dozens of US cities, not a single person has died while riding a bike share bike. And none of those cities has an all-ages bike helmet law. That’s a remarkable safety record, and all that biking is a boon to public health. While a helmet could save an individual in the case of a crash, there is little clear evidence that all-ages bike helmet laws have much of a public health benefit, if any. And if it impedes bike share’s success, it could end up having a negative public health effect.

That said, Seattle is a helmet-wearing town, and having helmets available with or without the law is probably a good idea since so many people will want them.

Having unlocked bins certainly increases chances of theft and vandalism, and it’s not clear if people will trust a helmet they got from an unlocked bin as much as they might if the helmet came from a vending machine. But we’ll see soon enough because OMG PRONTO LAUNCHES OCTOBER 13!

Pronto Cycle Share announced today that installation begins this week for the system’s 50 docking stations, on its way to launching Seattle’s bike share program on Oct. 13. Pronto and its operator, Alta Bicycle Share, will install the first station at 9th Avenue and Mercer Street, and will continue installing stations across Seattle as the launch nears.

When Pronto launches next month, it will connect the University District, Eastlake, South Lake Union, Belltown, Downtown, Pioneer Square, the International District, Capitol Hill and First Hill with an initial 500 bikes at its 50 docking stations.

“Excitement is really building now that we’re just weeks from launching bike share in Seattle,” said Holly Houser, executive director of Pronto Cycle Share. “As stations are installed, our growing list of members will start to see exactly how bike share will fit into their transportation routine.”

When the system launches, the stations will feature an interim helmet-distribution solution that provides a rental helmet from self-serve bins free of charge to users. An automated vending machine that will dispense helmets for a small fee will join the system in 2015.

“We’re going to launch with an honor system,” Houser explained. “Riders can check out a free helmet from an unlocked bin at each station, and then return it to a separate used helmet bin at any station when they’ve completed their ride.”

Following each use, Pronto will sanitize and inspect each helmet and return them to stations throughout the city, ensuring that stations remain continually stocked with enough helmets to meet the community’s need.

Annual members will receive a voucher to redeem a free Pronto helmet from REI and other participating retail locations.