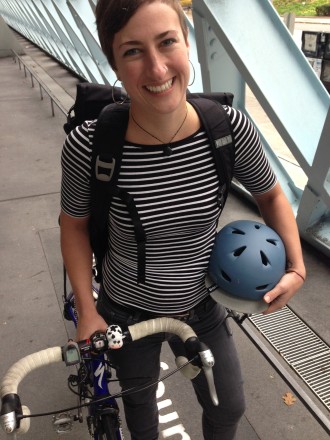 As Pronto Cycle Share nears its first birthday, the Holly Houser is handing over the helm.

Houser has been Executive Director of Puget Sound Bike Share, the non-profit behind Pronto, since late 2012. From selecting an operating company (Alta Bicycle Share, which was bought by Motivate) to finding major sponsors to uniting the city government behind the system, Houser has had a busy couple years (oh, and did I mention she’s also in the rock band Gibraltar?).

Now that the system approaches one year of operations, there are big plans from inside the City of Seattle to take over and dramatically expand the system (see our previous story).

“We’ve been working collaboratively with the City of Seattle to make steps toward our vision to weave bike share into the region’s public transportation network,” Houser said in an email to users, “and we’re pleased to have them take on a more prominent role in leading those efforts.

“This is a natural progression for our program, and one that we believe best positions Pronto for a bright and vibrant future.”

Next month, Houser will step down as Pronto ED to “tak[e] on new challenges outside of the transportation sector.”

It’s hard to believe that the one-year anniversary of bike share in Seattle is right around the corner! When I think about what we’ve accomplished over the past year and the time leading up to our launch, I’m humbled with gratitude by all of the ways you’ve helped get us here.

It’s in this spirit that I’m reaching out to share some news about the road ahead for Pronto, and some changes that are in store for me, too. I joined the nonprofit in 2012 and was entrusted with the mission to introduce bike share as a viable transportation option for residents and visitors to our city. Today I am incredibly proud to have been part of the team that realized that vision.

We couldn’t have done it without the support of so many important advocates – our sponsors, community partners, volunteer board, allies at the City of Seattle, and countless others. Together we faced challenges, created solutions, and accomplished what some might have deemed impossible – launching bike share at a time the industry was rife with challenges, and in a year no other city made the same attempt.

But, thanks to your support, our community-backed grassroots efforts led a successful rollout, and now nearly a year’s worth of milestones that have reflected the importance of bike share to this community. Together, we’ve achieved some amazing results over the past 10 months:

Now, Pronto is poised for its next phase of growth that will expand access to more users and communities across the Puget Sound region. We’ve been working collaboratively with the City of Seattle to make steps toward our vision to weave bike share into the region’s public transportation network, and we’re pleased to have them take on a more prominent role in leading those efforts.

This is a natural progression for our program, and one that we believe best positions Pronto for a bright and vibrant future.

As such, next month I’ll be moving on from my role as Pronto’s executive director and taking on new challenges outside of the transportation sector. I am endlessly grateful to have had the privilege of working with, and learning from, so many passionate and inspiring individuals, and I want to thank each and every one of you for partnership over these past few years.

I will certainly  continue to cheer for bike share as one of our region’s most rapidly growing, equitable and sustainable transportation solutions, and look forward to watching the program’s growth and future success.Thanks, once again, for your enduring support and encouragement…and #GoPronto!

11 Responses to Houser stepping down as bike share Director