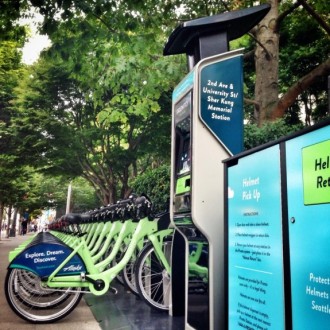 The purchase comes amid challenges expanding and improving successful systems in New York and Chicago. Citi Bike in New York has especially had challenges with software and with demand overwhelming the supply of station docks and bikes. The new owners plan double the size of Citi Bike to an astounding 12,000 bikes, according to the New York Times.

Holly Houser, Executive Director of Pronto, said she does not expect the buyout to effect the Seattle-based system.

“The short answer is that Pronto won’t really see any direct effects of this buy out,” she said. “Overall, we see it as a positive step in the evolution of a still very young bike share industry.” Houser directs Puget Sound Bike Share, the non-profit organization that owns Pronto. PSBS contracts with Alta to operate the system, so Houser is not an Alta employee.

According to a press release on the Alta Bicycle Share website, the new company — which has the dull name Bikeshare Holdings LLC — is “a newly-formed investment venture that includes the CEOs of Equinox®, a fitness and high performance lifestyle leader, and Related Companies, one of the nation’s most prominent real estate firms, as well as Jonathan Schulhof, a private investor who led the transaction.”

Alta Bicycle Share is a separate, but closely entwined, company from Alta Planning + Design. The design firm end of Alta will remain as is, though I imagine several executives will have fatter wallets. The price of the sale has not been disclosed.