With Pronto in the red, city outlines takeover and expansion plan 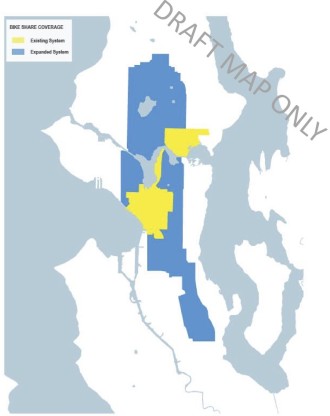 The city is just about ready to take over, rework and expand Pronto Cycle Share. Think of it as Pronto 2.0.

According to the new plan, 2016 will be about stabilizing the system’s financials under city control and creating the details for expanding far north and south of the current service area.

Unfortunately, the expansion is not scheduled until 2017, as there are many details to work through including the possibility of e-assist bikes.

But first, let’s rewind to see how we got here.

Pronto launched in October 2014 under the ownership of Puget Sound Bike Share, a non-profit organization made up of regional public and and private partners.

Despite several challenges we’ll highlight in this post, people using Pronto completed 144,000 trips traveling an estimated 335,695 miles or the equivalent of 13.5 times around the equator in just one year.

That’s a whole lot of biking, showing that Pronto was filling many gaps in the city’s transportation system. This is the central thesis for a bike share program: Transit is good at getting people to a general area, but it isn’t so good at closing the first and last miles of those trips. And if you live in the service area, it’s even more useful.

The first year has taught the city a lot about the system, it’s limitations, it’s costs and how to make it better.

In retrospect, launching right before the rainy and dark season may have taken some of the wind out the system’s startup sails. The novelty phase of a new system is an important one-time marketing opportunity to gain users and establish habits.

And creating two effectively separated satellite systems in the center city and in the U District has sapped vital station area density from both areas. The network effect of nearby stations is the lifesource of bike share stations. Many station placements are also not optimized for the highest-demand destinations like downtown transit stations. By spreading the 54 stations and 500 bikes among the two areas, the effective sizes of each system don’t quite reach the critical mass needed to be fully successful. Seattle’s a big city that has a system better suited for a small city.

Public grants guided the decision to launch in the U District along with the center city. A grant-blind strategy probably would have started centralized and then expand north to at least Fremont, Wallingford and the U District all in one go. But hindsight is 20/20. The only real solution looking forward is expansion, which the city plans to do.

Here’s a look at the financials: 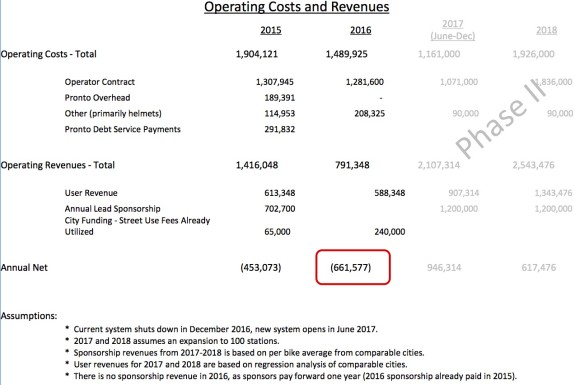 The system is operating in the red, and it is insolvent without city support. The most immediate financial challenge for Pronto stems from debts assumed at launch. Essentially, the non-profit owner of the system Puget Sound Bike Share did not raise enough capital before launching, taking out loans to make it work. Servicing those loans is now sapping the budget, driving operating costs into the red. From the City Council fiscal note document:

… insufficient funds were raised for the initial equipment purchases and consequently, borrowing costs lead to ongoing debt service payments that contributed to year-end net losses. When overhead costs and debt service payments are removed, the bike share system costs and revenues are comparable with other successful bike share systems around the country. To shift the system to an operational equilibrium where costs are more in line with revenues, and then to proceed with an expansion, the City needs to acquire the portion of the assets that Pronto owns.

In other words, income that should be funding operations is going to debt service instead. So the city needs to buy that out to get the books back on track. In the process, they will also buy out the non-profit’s assets, including:

All of this will cost $1.4 million from the $5 million already budgeted for the system (the city already owns 28 of the stations, which were purchased using a Federal grant).

UPDATE: “[Pronto’s operations] would break even today if it were city run and there were no debt payments,” said SDOT’s Nicole Freedman. The reorganizing of the system this year would “align us with best practices around the nation” where major systems are publicly-owned. It’s a system that “works really well.”

Legislation to invest the rest of the bike share budget will go to Council later this year after the city further develops the expansion plan in more detail.

Why should Seattle own Pronto?

Good question! Much of the reason is boring behind the scenes stuff, like streamlining overhead, consolidating ownership of assets and expanding opportunities for grants available to municipalities but not non-profits.

But most importantly, the city can make value decisions that stretch beyond just the bottom line. And the perfect example is expanding bike share service to Rainier Valley.

If a singular entity or a for-profit company were to own Pronto, expanding to Rainier Valley would probably not make sense. The density of homes and destinations likely isn’t high enough to make the system profitable.

But the social value of bike share is the ability to increase access to bicycling to more people, bringing neighborhood destinations and high quality transit service within reach of more homes. Access to a working bicycle is a big impediment to biking in low-income communities. Bike share is an incredible opportunity to close that gap, providing an affordable, dependable and healthy mode of transportation for more people.

UPDATE: “Our goal is to make bike share part of the public transportation network,” said Freedman. The planned expansion budget includes $600,000 for “low-income expansion” to purchase stations in low-income areas and to fund reduced cost memberships “like OCRA Lift for bike share” to “make it one of the most equitable systems in the country.”

In other words, is bike share a business or is it public transit? I believe it should be a form of public transit, and access should be delivered with a race and social justice lens, not merely a capitalist/profit lens.

Seattle, led by Chief of Active Transportation Nicole Freedman, deserves credit for understanding this and presenting a plan to pursue social justice through bike share: 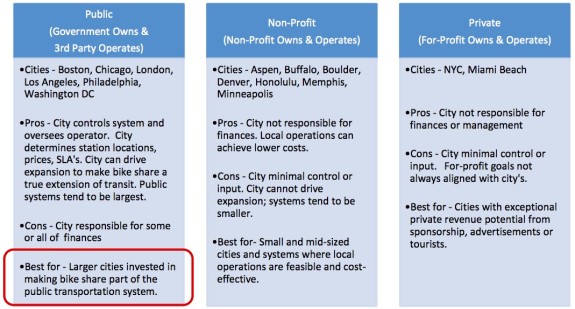 But Pronto’s budget is also saddled with a very rare requirement imposed by King County’s rare all-ages helmet law. To get around this barrier, the system launched with helmet bins at every station. So not only does the system need to provide helmets, but staff need to pick them up, clean them and restock stations. This is a big undertaking, and adds tens of thousands of dollars annually to the budget — a city presentation includes a budget item of $83,000 for “Other (primarily helmets).”

But worse, it is well-known that helmet requirements diminish bike share use even though such systems consistently prove to be exceptionally safe. Getting a helmet from the bin adds a step to and otherwise streamlined process, and are you really going to unwrap and “dirty” a helmet just to bike a mile or so? Since the system added locks to the helmet bins, they also cost $2 to rent for short-term users, while pass holders can get one for free if they enter a code in a Pronto email.

The added cost of a helmet further deters low-income users or exposes them to citations for choosing not to wear a helmet, an act that is perfectly legal in nearly every other big city in the nation and the world.

There is a very simple solution: Change the law to match peer cities. Minors are still required to wear helmets, but adults can make their own choices. Helmets can still be provided at an optional cost to the user, but they shouldn’t bog down the whole system and get in the way of all its potential public health benefits (we’ve gone deep into this in previous posts like this one).

Here’s the timeline for the Pronto investments:

126 Responses to With Pronto in the red, city outlines takeover and expansion plan