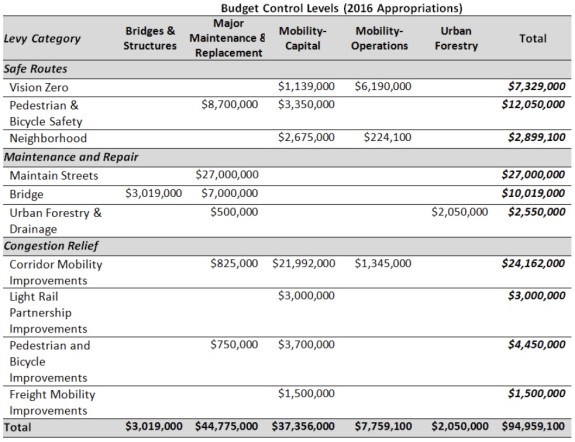 Just the Move Seattle budget adds for 2016, from City Council

When Mayor Ed Murray presented his proposed 2016 budget, he had to assume there would be no replacement for Bridging the Gap, and it was pretty devastating. There was an exciting $5 million one-time expenditure for expanding Pronto Cycle Share, but the budget for biking, walking and safe streets was dismal. The sidewalk maintenance budget would be zeroed out, and the trails and bike paths budget would have declined from about $6 million annually to $1.3 million, for example.

But that won’t happen because you all approved Move Seattle by a commanding 17-point margin (as of the most recent count). The levy adds nearly $100 million to the 2016 transportation budget, including massive increases in biking, walking and safe streets investments.

These additions as well as other transportation elements of the budget — including funding to expand Pronto Cycle Share and a proposal to focus ten percent of red light camera funds on safe streets projects — sailed through a major Budget Committee meeting Monday. Nothing is official until the full Council votes on the budget next Monday, but yesterday’s committee meeting (which included all Councilmembers except Bruce Harrell) is typically where most of the big budget changes happen.

Pronto would double in size, with Council permission

The Council did add a proviso to the Pronto funds requiring SDOT to present an expansion plan and get Council approval before moving forward, an action supported by Cascade Bicycle Club (full disclosure: My spouse Kelli works in the Cascade Advocacy Department. I’m gonna be writing this disclosure a lot, it seems).

The Pronto funds attracted a bit of attention when the mayor first proposed the budget, and this proviso is intended to provide extra oversight on the city’s investment. The Seattle Process™ can often be too much, but there are enough questions about Pronto’s expansion that presenting a plan to get Council sign off doesn’t seem egregious. The trick will be getting the plan together and approved fast enough to get the stations on the ground for the summer.

The $5 million investment would be matched by $1 million from Motivate, the company that operates Pronto, on the condition that the system grows to at least 100 stations. Motivate has determined that an expansion that big would be necessary to ensure more sustainable operational income if they are going to take on financial responsibility for operational costs.

As we reported previously, the city is in the process of taking ownership of Pronto from the non-profit Puget Sound Bike Share. The city did not win a big Federal grant for a “massive” expansion of the system, but the 2016 budget would still pave the way to double the size of the system.

The city’s school zone speed cameras keep proving to be hugely successful. Not only does the presence of cameras immediately slow traffic, but the money they raise goes directly into Safe Routes to School projects. And projected 2016 revenue for the existing cameras will fall nearly $800,000 short, which is actually good news. It’s a revenue stream that puts itself out of business by reducing speeding in school zones and, therefore, raising less money. This is government at its best. It’s almost beautiful.

But, of course, we want to keep funding Safe Routes to School. So in part to offset this reduction in the Safe Routes budget, outgoing Councilmember Nick Licata put forward a change to move ten percent (about $400,000) of the existing red light camera funds into the same safe streets account as the school zone speed camera money. Move Seattle will invest another $800,000 into the account.

“While no one wants to get a ticket while driving, knowing fines go towards making streets safer and more predictable takes some of the sting out,” said Seattle Neighborhood Greenways Director Cathy Tuttle, who has been pushing for more funding sources for Safe Routes to School. “There is an added bonus knowing that putting money into intersection improvements improve behavior of all road users.”

The Council also responded to actions by Rainier Beach High School students by adding $1 million to the budget to expand access to free or discounted ORCA cards for high school and middle school students. This is awesome.

Thanks to Councilmember Sally Bagshaw and pushing from Seattle Neighborhood Greenways, development of the new “megablock” site at Mercer and Dexter (where Broad Street used to be) is now instructed to consider extending the Mercer bikeway. This could be an important step toward connecting the bikeway to other South Lake Union bike routes, something that really should have been done during the initial project. We’ve ranted about this before.

You can dig through all the Council changes considered yesterday in this PDF.