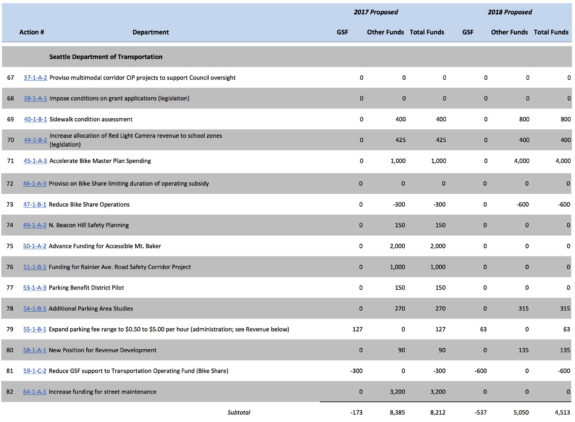 SDOT budget changes under consideration. View full document and dig further into details via this PDF.

Seattle’s City Council will work Tuesday and Wednesday this week to come up with their changes to Mayor Ed Murray’s 2017-18 budget, getting it ready for final passage Monday. We already told you about some of the changes on the table for bike share and some of the proposals pushed by safe streets groups like Seattle Neighborhood Greenways and Cascade Bicycle Club. So what made it this far?

Here’s a look at the walking and biking changes facing the Council and who is sponsoring them:

What happens to the budget under Trump?

President-elect Donald Trump has threatened to cancel all Federal funding going to “sanctuary cities” that direct employees not to check the immigration status of residents except in certain law enforcement contexts. Seattle is rightfully one of these cities, and Mayor Ed Murray has said the city will remain so no matter Trump’s threats.

Seattle Bike Blog fully supports Mayor Murray and all our neighbors in this. We live in troubling times when the incoming President pits city budgets against its own residents. But we have to stick together.

What would such cuts mean for the Seattle budget? Well, we don’t know yet. Maybe Trump won’t follow through, or maybe the cuts will be limited to immigration-based work. Kevin Schofield at the Seattle City Council Insight blog dug into the proposed 2017-18 budget and found about $239 million in expected Federal funds. If the worst case happens and all Federal funds are cut, the Seattle Department of Transportation would be the hardest hit:

The big loser would be SDOT; it stands to lose $10.2 million in 2017 and $118.3 million in 2018. And actually, it’s much worse, because SDOT is counting on another $75 million in next year’s as-yet-unapproved federal budget for the new Center City Streetcar line that it hasn’t added to the city’s official budget yet. But SDOT would also lose almost $55 million  for the South Lander Street overpass, $10 million for the Broadway streetcar extension, $8 million for bridge repair and replacement, $4.2 million for the electrification of Metro bus route 48, and almost $77 million in miscellaneous funds for operating and maintaining transportation corridors in the city in 2017 and the years beyond.

Founder and Editor of Seattle Bike Blog.
View all posts by Tom Fucoloro →
This entry was posted in news and tagged 2017 budget. Bookmark the permalink.