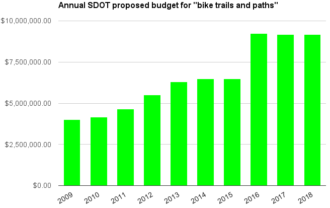 Changes in one key bike funding line in the city’s adopted budget. Data from SDOT. Note: 2017 and 2018 figures are currently proposed.

Mayor Ed Murray unveiled his proposed 2017-18 budget last week amid protests over mostly non-transportation elements like police funding, funding for the city’s homelessness emergency and the city’s ongoing affordable housing crisis. The mayor and the majority of the Council also angered many of the protestors by blocking them from entering the Council chambers even if they arrived hours early and signed up to speak during public comment. It was a rather messy day at City Hall.

Accordingly, those issues are likely to be the dominant issues under debate during this budget session, as they should be. But as we do every year, we will take a look at the transportation elements of the proposed budget and highlight some areas for improvement.

The 2017-18 transportation budget proposal reflects something of a reshuffling of budget lines and amounts to reflect Move Seattle levy revenue. And Move Seattle did certainly save the bike budget. For example, the mayor’s budget one year ago had to assume the previous levy would expire and that no new levy would pass to replace it (the budget was proposed before voters approved the levy), and that budget essentially zeroed out the sidewalks budget and slashed the “bike trails and paths” budget down to about $1.3 million.

But the people of Seattle passed Move Seattle by a resounding margin. So instead of these very tough cuts, the proposed 2017 budget includes an impressive $11.9 million for new sidewalks on top of $4.7 million for the Pedestrian Master Plan and $800,000 for school safety. These sidewalk additions deserve lots of praise and support from the Council. That’s a big increase.

The budget also includes $1.7 million over two years for the Rainier/Jackson multimodal corridor project. This could be huge. The north end of Rainier is horrendously unfriendly to people on foot and bike despite having a major transit stop. The transit access demand will only get stronger when it gets a light rail station in 2023, and recent changes to zoning in the area could allow for many more homes and families. But beyond that, this stretch of Rainier is the single biggest impediment to bike access between Rainier Valley and the city center. We gotta do this right.

The budget also includes more than $8 million over two years to build the Fauntleroy Boulevard, a long-standing project initially led by former Councilmember Tom Rasmussen. This relatively short project is mostly about creating a more proper entrance into the heart of West Seattle, but it would also include much-needed protected bike lanes.

The “bike trails and paths” line in the proposed budget, which does much of the Bike Master Plan work, stands at about $9.17 million annually. While a quick glance at the funding breakdown (see below) shows that this amount is about the same as 2015 — before Move Seattle — SDOT spokesperson Norm Mah says it only appears that way because delayed projects rolled over into 2015.

“The figures for 2015 are augmented as we were spending carryover funds as well as new budget allocations,” he said. SDOT sent us a new spreadsheet (.xlsx) that points out the intended budget allocations in recent years without rollovers (see the bar graph above). This spreadsheet shows the annual budget increasing about $2.8 million compared to pre-Move Seattle years.

Will this be enough to put the 20-year Bicycle Master Plan on track? Mayor Murray says it is.

“After the recent completion of the protected Westlake bike lane, I look forward to more bike facilities coming on line as my budget funds the implementation of the Bike Master Plan,” Mayor Murray said in his remarks to the City Council.

The Bike Plan estimates that it would take at least $20 million per year to be completed. Not all of this $20 million needs to come specifically from this one budget line, though. Some could come through multimodal corridor redesign projects like the Roosevelt-to-Downtown project in design now. Other funds could come from Federal, regional and state grants. And some could come from cost-savings, such as coupling improvements with other road work or using paint and plastic posts to separate bike lanes instead of concrete curbs.

It’s hard to add up these other elements (especially since bike elements in multimodal corridor projects are not guaranteed, future grants are unknown and it’s not clear how far cost savings can stretch), so it’s hard to say for sure if the city is really keeping up with the Bike Plan. After getting slashed, the city’s short-term bike plan would barely keep pace on building the needed five miles of protected bike lanes annually so long as no project gets delayed, which is unlikely. It would also only build half the 12 miles of neighborhood greenways needed annually to keep up. So the Bike Plan is not on track yet.

And that’s just counting miles, not quality or connectivity of those bike investments. If the city were falling short of the mileage because they were building difficult but vital bike connections — like new I-5 crossings or the full Center City Bike Network — that would be a good trade-off. But that’s not happening, either. Or at least it’s not happening on schedule.

The good news is that this could all change. Seattle has the funding needed to make major changes, but it will take strong leadership from the Mayor’s Office and the City Council to direct this power where it is most needed.

Seattle Neighborhood Greenways has some specific budget ideas that are great. The best one is their proposal to boost Vision Zero funding by $3 million to back up the new speed limit changes with physical safer streets designs (see their proposal in this PDF).

They are also seeking five more specific increases across the city (more details in this PDF):

These are all very reasonable asks that could have a big impact. The Council should definitely push for Seattle Neighborhood Greenways’ changes.

They should also request that the Mayor’s Office spell out how the current budget will keep the Bike Master Plan fully on track, as the Mayor said in his speech. If this level of funding is set to be the standard going forward, we need to know that it is enough to complete projects on time and double the miles of neighborhood greenways.

For reference, here is the Mayor’s proposed expenditure table for SDOT (browse the budget yourself on the city’s website):

This entry was posted in news and tagged 2017 budget, ed murray, sdot. Bookmark the permalink.