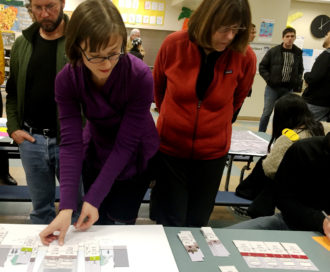 Seattle has the chance to finally build a safe and comfortable bike route from the University Bridge to downtown. But more than that, the city also has the chance to create a safer and more inviting main street for the Eastlake neighborhood and improve local transit service.

But this won’t happen without your strong support. SDOT is hosting a new set of open houses Wednesday and Thursday to discuss their latest updates on the Roosevelt-to-Downtown High Capacity Transit Project (meeting content will be the same at each open house):

Community support for protected bike lanes on Eastlake Ave is very broad. The Eastlake Community Council endorsed including protected bike lanes in a series of letters to SDOT this winter (here and here), noting that alternative route options would likely not be used as well as Eastlake Ave itself. They also suggest that the city include more and better bike parking in business districts so that the new people biking on the road can more easily stop and patronize businesses there (great idea!).

But wait, isn’t this a transit project? What about bus lanes?

Good question! I’m eager to see how the city’s studied options have evolved and how transit times compare between them. Because as we explored in a previous post, exclusive bus lanes can fit on Eastlake Ave, but only at the expense of quality bike lanes and/or sidewalk space, neither of which are exciting trade-offs. If planners can figure out how to fit bus-only lanes and create a safe street with good bike lanes, I’m eager to see it.

On the other hand, traffic volumes are not so high on Eastlake (between 14,000 and 15,000 vehicles per day, including bikes). Improvements like in-lane bus stops can help prevent delays because buses wouldn’t need to wait for passing traffic before merging back into the travel lanes (the law says people need to yield to merging buses, but few actually do this). Strategic and smart placement of turn lanes would also help keep the travel lanes flowing, helping bus travel times. Smart traffic signals and bus “queue jump” signals can also help get buses around traffic backups.

Beyond all this, I wonder if efforts to get people driving through the area to use I-5 instead of Eastlake would also help keep traffic levels lower.

With in-lane bus stops, there is space for turn lanes where needed to keep traffic and buses flowing. This truly complete streets design would be a boon for Eastlake businesses, would speed up buses and would finally create a safe and direct bike route on the east side of Lake Union.

Our coverage of this project has been very focused on Eastlake because it is such a huge bike route missing link and also the most difficult stretch to design. But there are also opportunities to improve the Roosevelt/11th/12th corridor and to connect through South Lake Union to downtown.

At this point, our comments are pretty much the same as in our previous post: Let’s do it! Specifically,