It’s time for a transportation revolution east of Lake Union

Imagine a direct, fully connected and protected bike route from Roosevelt and Green Lake all the way to downtown. The city is studying how to make it happen.

And not only could the project fix some consistently dangerous collision hot spots, but the project would also fill in the last major missing piece in a complete Lake Union bike loop. This is guaranteed to become a major commuting and tourism draw, revolutionizing non-motorized transportation in the city and opening up Eastlake businesses to visitors like never before.

But that’s not all. The bike lanes can also come side-by-side with significant transit efficiency improvements connecting some of the most densely populated neighborhoods to our state’s biggest and fastest-growing job center.

SDOT presented three concepts for improving surface transit service between Northgate and the city center (you can see more details in this PDF):

I know what you’re thinking. “Why even continue writing? Obviously we want Full BRT and bike lanes the whole way!” Well, you’re right. But there’s more to report, so stick with me.

First, let’s remember why the safety improvements are so important on this corridor. Here’s a map of biking and walking collision hot spots. Circles only appear if at least four people were in collisions in just four years. So if you see a circle, it’s a major problem area: 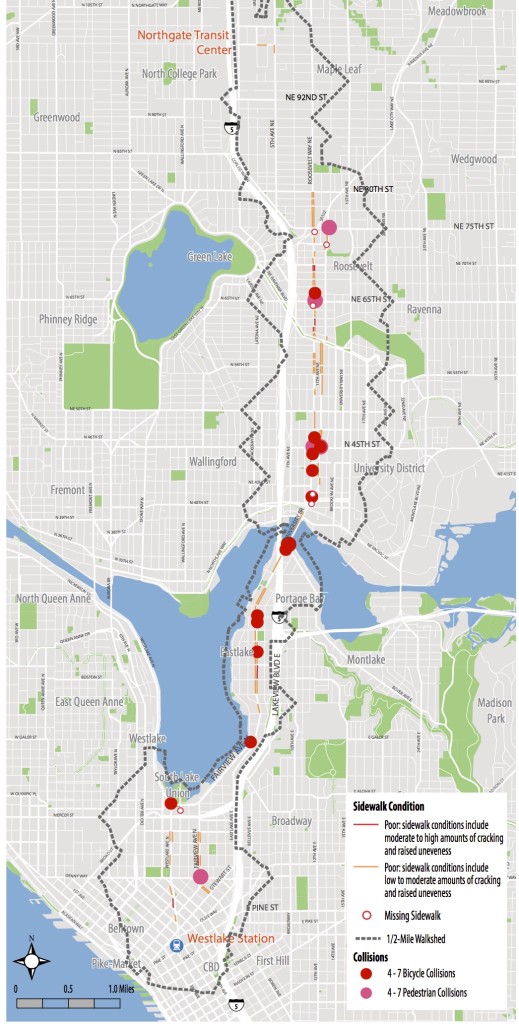 This is completely unacceptable. Dozens of people are getting hurt every year along nearly the entirety of the corridor. And anyone who bikes Roosevelt and Eastlake Ave regularly knows why. Cars are moving too fast, and there is simply not enough bike space to stay clear of pinch points and parked car doors. These streets need quality protected bike lanes. It’s the only way.

Also, remember that with the state’s 520 Trail extending from the Eastside to the Eastlake neighborhood in coming years, this corridor is set to become an even more important regional bike route than it already is.

Roosevelt is relatively easy. The city already plans a protected bike lane as part of next year’s repaving project, and the design of that lane does not need to change significantly. To make it BRT, just make the travel lane next to the bike lane buses-only, and you’ve got it. Then copy the design to 11th/12th, which serves as the northbound complement to the southbound Roosevelt: 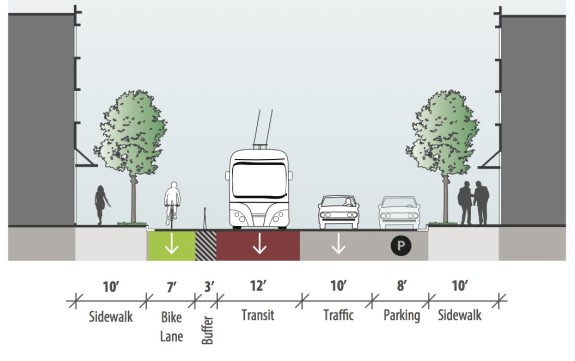 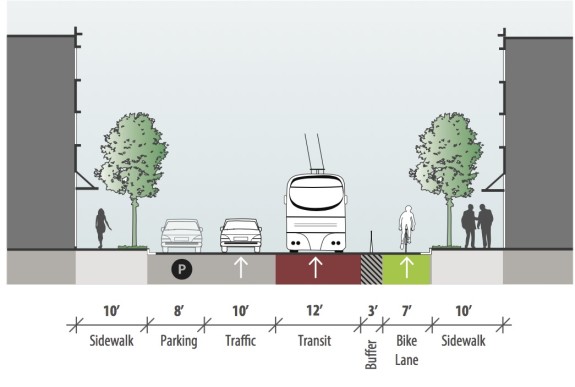 Eastlake Ave is a bit more difficult, especially with transit-only lanes. Planners presented two concepts that don’t include exclusive lanes. Note that the first option requires moving the curb space, which is likely to be rather expensive: 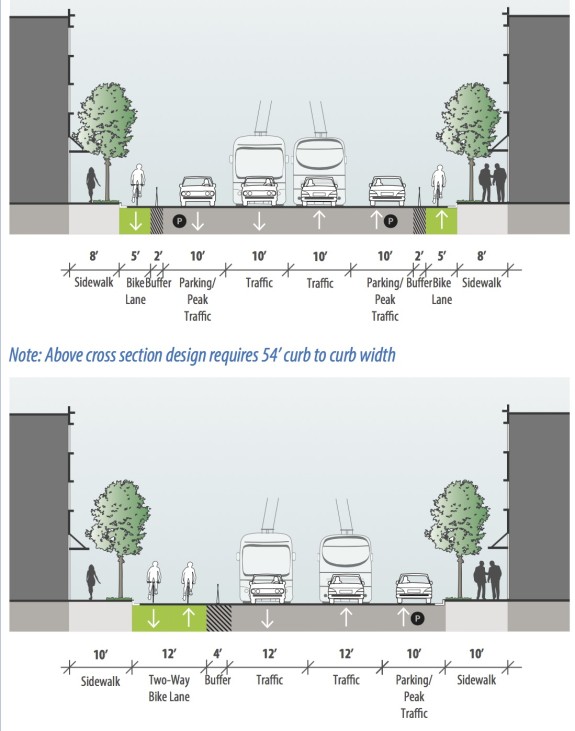 We here at Seattle Bike Blog came up with our own variation on the city’s designs. Our option includes one-way bike lanes, which is preferred, but does not move the curb. It also allows for a more proper bike lane and barrier width.

And to keep backed-up turning traffic out of the way of buses, the parking space could be used for dedicated turn lanes where needed:

You can play around with the design options yourself using Streetmix (start with the existing conditions).

But if we go all-out on BRT, it’s gonna be a tight squeeze to fit everything on Eastlake. If we invest to move the curb, we could get enough space for skinny bike lanes, as outlined in this concept:

But these bike lanes would not meet the goal of all-ages-and-abilities bike routes as outlined in the Bike Master Plan. Perhaps by squishing the transit lanes a little and raising the bike lanes above street level, we could add some much-needed protection to the bike lanes.

Also concerning in the design, there does not seem to be space in this design for any bus stops unless buses merge with and stop in the general traffic lanes, which could be cool. We’re imaging something like this:

Or maybe the solution requires a little more creative thinking about how Eastlake Ave should really work. Because Eastlake Ave is the commercial center of the neighborhood, it should and easily could be a destination of its own.

Eastlake runs parallel to I-5, which should be the major route for through-traffic. How many of the cars on Eastlake Ave today are just passing through with no intention of ever stopping in the neighborhood? If those trips could be somehow encouraged to take I-5, Eastlake could be designed to focus on transit, biking and neighborhood access. After all, you only need transit lanes if there is backed up traffic in the way of buses.

And existing traffic levels on Eastlake Ave actually aren’t very high, clocking in between 14,000 and 15,000 vehicles per day (including bikes). That’s not many more vehicles per day than Dexter, which carries about 13,000 on its busier section in South Lake Union. So a complete street design could work well, especially if even a small number of through-trips can be encouraged to take I-5 instead.

How do we make this happen? That’s for the city’s planners to figure out. But it seems very achievable. 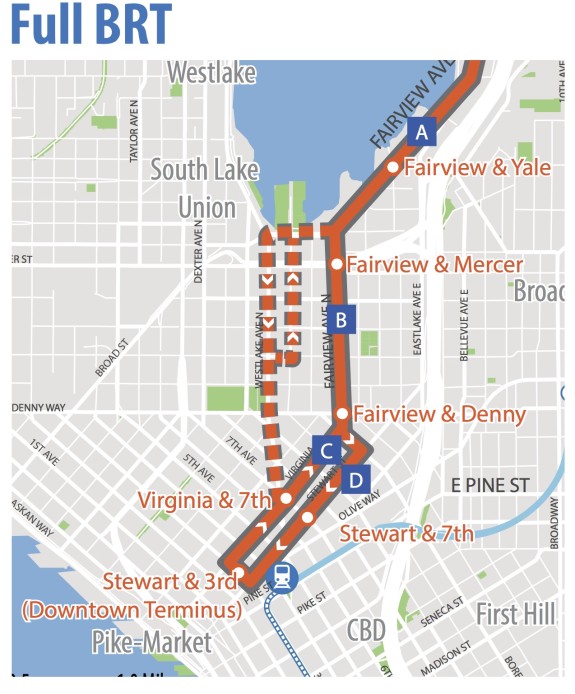 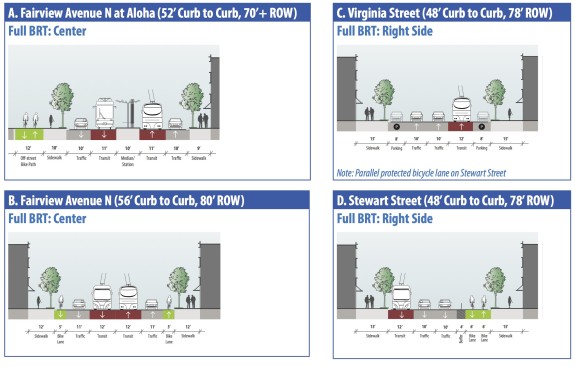 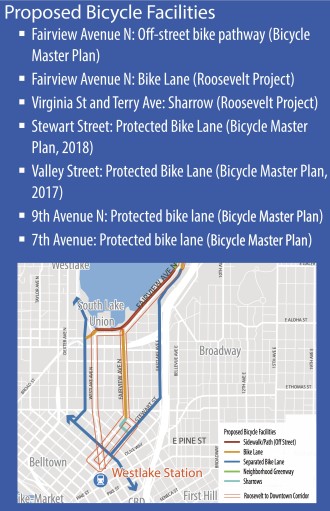 Now here is where those fully separated transit become very important. From Eastlake Ave to downtown is a major transit pinch point and a huge missing link in the regional bike network.

First interesting note: The section of Fairview Ave N between Eastlake and Lake Union Park (Section A) shows a two-way bike lane in the current parking area, much like the city’s plans for Westlake.

Also, the city is presenting an exciting concept for protected bike lanes on Fairview Ave N through South Lake Union (Section B). The concept image shows insufficient paint-only lanes, but with a little more space for a barrier and perhaps by raising the lanes above street level, they could be high-quality bike lanes. This is a very smart idea, and a major piece missing from the Bicycle Master Plan. These lanes would provide vital access to South Lake Union businesses and homes as well as providing the most direct route to the planned two-way bike lanes on Stewart St (Section D). From there, the lanes would be plugged into the planned Center City Bike Network.

The south section of this project could provide unprecedented transit efficiency and create a fully-protected and direct bike route into the city center. It is an absolute home run.

This whole project is a chance to remake a long and complicated corridor for biking and transit. Rather than piecemeal bits here or there, we could have it all in one go. Seattle almost never approaches transportation projects in this complete and connected way, and we couldn’t be more excited about it.

The details are very close to coming together. It’s going to take some creativity from the city’s street designers and some political guts to take on such a big project. And, of course, it’s going to take a lot more funding than what we have from Move Seattle to do it all. But the benefits are immense.

You can submit your feedback online by completing this survey.