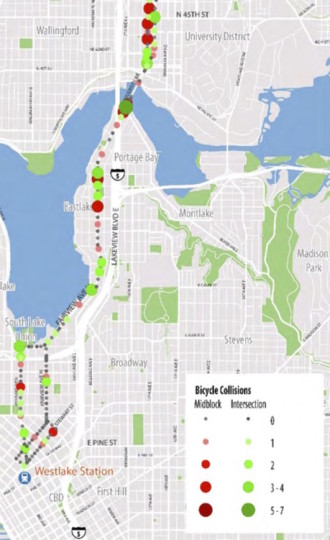 Eastlake Ave is a white knuckle bike ride. Even though it’s also the only reasonably flat street that directly connects the city center to the University Bridge, there are no bike lanes. Instead, people have to try to navigate the busy street in a wide shared lane, often squeezed between car traffic and parked cars.

In total, there were 229 collisions on Eastlake between 2010 and 2014, according to the project’s draft existing conditions report (PDF). 97 people were injured.

And these dangers on Eastlake Ave are huge impediments to people who want to bike, but are not willing to mix with cars on busy streets. The dangerous and stressful conditions also hurt Eastlake businesses because the road is so clearly focused on moving people through, not to, the commercial areas.

The city is moving forward with plans for a Roosevelt to downtown high capacity transit project mostly along the Roosevelt Way and Eastlake Ave corridors, so this is the time to make sure biking, walking and efficient transit are the top priorities. Funded in part by the Move Seattle levy, this project is an example of the kind of change people want to see in our city. Passing the levy with such a strong margin was a mandate to be bold and finally connect these major missing links in our bike and transit networks, improving walking safety as we go.

But even with such a strong voter mandate, bold changes won’t happen without clear direction from the public. You have two chances this week to get involved and help make sure bike lanes on Eastlake not only happen but are high-quality and safe:

If you’re wondering what makes Eastlake such an urgent priority, imagine the following scene: Just after 5 p.m. on a dark and drizzly evening a steady stream of bike lights head north on Eastlake Avenue. Commuters leaving Downtown Seattle and South Lake Union boldly take the lane. Currently there are no real bike facilities on Eastlake; sharrows and interspersed bike lanes that disappear at random don’t count. Yet hundreds of people bike on Eastlake because it is a direct and fairly flat route that connects people to places they need to go.

Currently Seattle Department of Transportation (SDOT) is working on a study for High-Capacity Rapid Transit that includes building a swift and reliable transit connection from Downtown Seattle through South Lake Union and along Eastlake Avenue up to Northgate. Safe bicycle facilities could be included along Eastlake with this project, but only if we show up and speak up for their need.

Many people currently avoid Eastlake Avenue because it lacks safe bike facilities. I know this because I sometimes cycle miles out of my way to take the Fremont Bridge from the Cascade Bicycle Club office to get to meetings downtown. I know I am not alone in that. It doesn’t have to be this way. Imagine if we built a bike facility that you’d feel safe riding on with your family to get to free museum day at MOHAI. Imagine if you could stop at your favorite cafe along Eastlake on your way home. Or with High-Capacity Rapid Transit you could also hop on a bus that drops you off in front of your office door. Our city would feel more connected and accessible, and we could enjoy the vibrant neighborhoods along the corridor.

At the open houses next week you will have the chance to review three different concepts for the corridor.

The most basic facility is the Rapid Ride Alternative. This is the cheapest option presented, but it provides the least benefit to the people who live and work along the corridor. This option would not offer any bike enhancements, and people biking would have to share the transit lane, which does not offer a comfortable and safe feeling ride. This scenario also provides the least benefit for transit improvements, keeping buses stuck in traffic.

The second option is the Targeted Investment Alternative that integrates the Rapid Ride plan and also includes some bike facilities. This design will also feature more improvements to bus efficiency, like dedicated transit lanes and queue jumps that allow the bus to get a headstart. We look forward to seeing more detailed designs of this option at the open house.

Finally we come to the full Bus Rapid Transit Alternative (BRT) that will have the biggest impact in improving transit by creating safe bike facilities and improving the walking environment. Plus it is a safe bet that protected bike lanes would increase the usage of Pronto Cycle Share between Downtown and the University District. However, the full BRT does not have the funding that it needs. While Move Seattle funds will cover approximately $9 million of the project, that leaves a lot of funds left to be leveraged for a complete project.

The Eastlake project comes as the city prepared to start repaving Roosevelt Way, a major project that will construct a protected bike lane from NE 65th Street all the way across the U Bridge. The state’s 520 Bridge Replacement Project will also include a bike trail connection from the Eastside to Montlake to north Capitol Hill, crossing I-5 and ending in Eastlake. This major regional investment needs to connect to a high-quality bike route on Eastlake Ave. Failing to act on this opportunity to complete this vital route would be simply neglectful.

But what about Fairview Ave E? 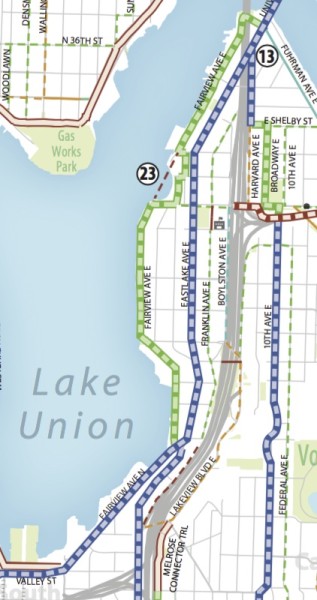 But that “almost” is a doozy. Fairview Ave E has a big missing piece right in the middle of it, between Roanoke and E Hamlin. The city’s right-of-way turns into lake, and there’s no public passage through the private community. To get around the closure, you have to navigate some extremely steep hills, including a steep dip through a narrow alleyway that passes driveways and garages.

Fairview Ave E will never work as a complete bike route without a direct and flat connection through this gap. It’s marked on the Bike Master Plan with a vague dotted red line representing a trail of some kind. We have argued in the past that a floating trail like Portland’s Eastbank Esplanade would be an amazing addition to both our bike network and our parks system (especially if the floating path goes around the floating homes, the views would be amazing).

But there is no talk of such a project, and no identified funding. For the sake of this discussion, Fairview Ave E is not a functional bike route alternative. We can’t wait any longer to connect the city center to the University Bridge with a safe and direct bike route.

This entry was posted in news and tagged cascade bicycle club, eastlake, roosevelt to downtown hct. Bookmark the permalink.