Sound Transit says ‘No’ to cargo bikes on light rail, families push back 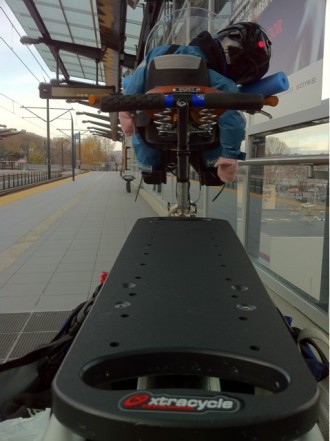 For families who get around town on larger kid-hauling bikes, transit can be a lifeline. Get trapped across town when the clouds open up? Nap time arrives with miles left to bike? Kids get cold? Running late and need to take a transit shortcut?

Unlike buses, which cannot hold most large bikes (like longtail or bakfiets-style bikes), Link light rail trains have space for large bikes, especially outside busy commute hours. So if there’s room on the train, it’s a great option for biking families. After all, rules allow four bikes per train car, two hanging and two standing. And a bike is a bike.

Or so I thought. But a recent Sound Transit blog post was unequivocal: No large bikes allowed. At all. Ever:

Bikes are welcome on Sound Transit trains and buses, but room is limited. It’s a safety thing. In an emergency evacuation, for example, the doors can’t be clogged with bicycles.

Because of that we’re letting our riders know we only have space for a certain number of bicycles. This is meant for the safety of all passengers. We also have restrictions on the types of bicycles you can bring on board. What you can bring are single-seat, two-wheel bicycles, including electric-assist bicycles.

What we cannot allow are oversized, cargo, tandem or fueled bicycles (including motorbikes and mopeds) and trailers.

I asked Sound Transit why this rule change was made, and Spokesperson Bruce Gray said cargo bikes have always been against the rules.

“It’s always been there in the fine print,” he said in an email. But given that even I didn’t know the rule — someone who has reported about local biking and transportation news since 2010 — it’s likely that this comes as news to many other people, too. And for biking families who also depend on transit, this feels like a big hit to the way they get around.

Not allowing non-traditional bikes on board removes biking families from trains. This is an accessibility issue. https://t.co/HfJgrF2oBJ

One positive clarification is that “regular” bikes with child seats attached are allowed, said Gray. But larger cargo bikes are becoming more and more popular for families around the region especially as electric-assist technology improves. And family biking is one of the most wonderful transportation movements our city has seen in recent memory. There must be some space for compromise.

Seattle Neighborhood Greenways has some ideas that both recognize concerns about large bikes on packed trains and keep the option open to families that depend on using transit as part of their trips. If you agree, you can sign onto their letter:

Bringing bikes on transit has obvious limits of scale. Many transit systems don’t allow any bikes at all, and our regional agencies have been leaders in efforts to connect transit and bikes (in the 90s, King County Metro was the first large transit system to put bike racks on buses).

Today, there are plenty of trains that are not anywhere close to crush capacity, and people with large bikes can find space. Maybe this will change when a lot more of the light rail system is built out in coming decades. But in the meantime, developing an off-peak cargo bike rule makes more sense than a total ban.

With UW and Capitol Hill Stations opening next month, we’ve been jokingly referring to U Link as the “Capitol Hill Bicycle Elevator.” UW Station is right off the Burke-Gilman Trail and for a few years will be the start of the line (so trains will start empty). For a couple bucks, you can skip the slog up the hill by taking a three-minute train ride for a couple bucks. That’s a pretty tempting deal. People have been using Beacon Hill Station this way for years.

And since Eastlake Ave is such a miserable street to bike, taking the train from UW Station to downtown is also pretty tempting. Though this is as much an argument for building quality Eastlake bike lanes as it is for more bike access on light rail.

Another part of the solution is high-quality secure bike parking at UW Station for bikes of all sizes. That way people can either walk the final legs of their trips, hop on Pronto Cycle Share or take a bus. Currently, there are lots of open-air coat-hanger-style racks in the UW Station plaza (the elevated path acts as a roof, which is clever). But as we have seen with other light rail stations, theft can become a problem since thieves know the bike owners have likely left them there for the day.

Could an OHSU-style bike valet work here? UW already hosts a bike valet during home football games, so they have some experience with the concept.

If people are bringing more bikes on the train than Sound Transit wants, they should get more ambitious about bike parking. And perhaps they should also be supporting Pronto Cycle Share expansion, which helps people avoid taking their personal bikes with them on transit. One easy way to do this would be to sponsor bike share docks near light rail stations, which could also help fund Rainier Valley and Beacon Hill Pronto expansions. 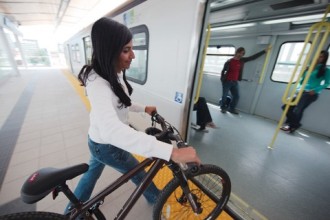 Another common sense solution is to improve the interior design of the trains themselves. They could be much more versatile if at least one car in a train has an open floor plan. For example, some of Vancouver’s newer Skytrain cars have wide open designs perfect for accessibility, handling crush capacity crowds and moving people with carts, strollers or bicycles of all sizes.

So rather than having the walled-off bike-hanging space Link trains have today, you would have a wide-open space with a railing so you can stand with your bike out of the path of the aisles or doors.

Sound Transit will also be buying 118 new light rail vehicles to meet capacity needs as more stations open in the next couple years.

“The manufacturer has not been selected yet, but one of the design criteria is to have more room for bikes on the trains. Exactly how many more is TBD,” said Gray.

46 Responses to Sound Transit says ‘No’ to cargo bikes on light rail, families push back