There are few bike route improvements that would do more for Seattle’s bicycle network than a comfortable, safe and direct connection in the Eastlake neighborhood. A vital connection between the University Bridge and the city center, Eastlake Ave is already heavily traveled by people on bikes.

But it can be a scary experience. Between 2007 and late 2014, at least 65 people biking on Eastlake were injured just in the stretch between the U Bridge and South Lake Union, according to a map published by the Seattle Times. One person died (RIP Bryce Lewis).

The city is currently studying options for high capacity transit along Eastlake Ave and up north along the Roosevelt corridor, and that project could be a great opportunity to create a permanent, high quality bike facility. The project page does not currently mention bike facilities specifically, though it does say, “The project definition will identify and evaluate modal options and use a complete streets approach to improve safety and access for all travelers.”

There will be two open houses this week to discuss the project’s possible alternatives: 6–8 p.m. today (Monday) at the Cascade’s People Center and 6–8 p.m. tomorrow (Tuesday) at the UW Tower (Cafeteria North). More details below.

Unfortunately, the Eastlake Community Council has preemptively taken a stance against building protected bike lanes and/or transit-only lanes on Eastlake Ave, citing concerns about parking and traffic. This is unfortunate because having a safe space to bike would be a huge boon to Eastlake businesses. Protected bike lanes and complete streets often increase retail sales, even if on-street car parking is displaced. I hope the council keeps an open mind about the benefits bike lanes could bring to the neighborhood and the people who live, work, play and travel through there.

Especially in a dense area like Eastlake, supporting walking, biking and transit is the only way to grow business. After all, we can’t build new car parking spaces (well, not without tearing down homes and businesses to do so). It’s been well documented that business owners consistently and dramatically overestimate how many of their customers arrived by car. A 2012 customer intercept survey conducted by SDOT found that the vast majority of customers in business districts all around the city got there by walking, biking or taking transit. Though Eastlake was not included, you can look at this graph and make an educated guess its results would be similar: 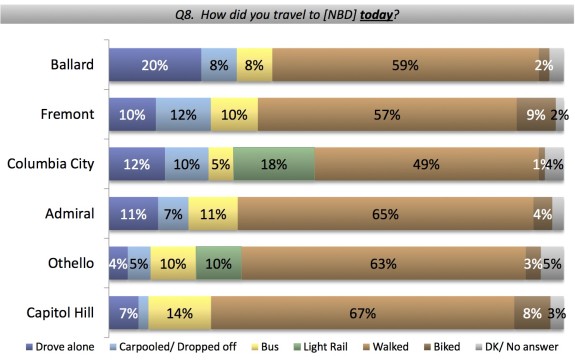 Seven percent of people who live in Eastlake already ride a bike as their primary mode to get to work, and way more than that ride bikes for other trips (like shopping or going out to eat). And the city’s neighborhoods with the highest bike commute rates nearly all lie within an easy bike ride of Eastlake businesses (Ravenna, the U District, Fremont, Wallingford, Capitol Hill, the Central District, South Lake Union, etc).

Well, it would be an easy bike ride if there were safe bike lanes on Eastlake Ave. 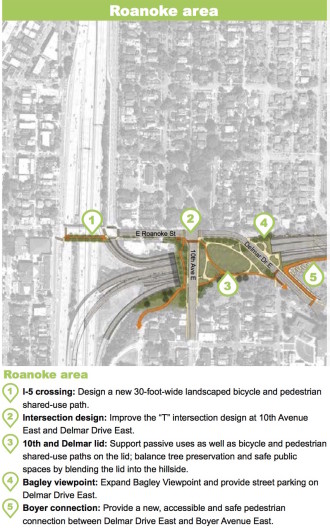 But looking at an even bigger picture, businesses on Eastlake should take note of the upcoming bike trail on the new 520 and Portage Bay Bridges. That bike route will create a brand new regional connection, and neighborhood biking and walking advocates have worked hard to make sure the trail connection crosses I-5 at Roanoke, dumping people into the Eastlake neighborhood.

A bike lane on Eastlake Ave is the best way businesses can make sure they take full advantage of the potential customers using this new trail connection, and bike lanes on Eastlake would also make the most obvious connection to the city center.

The only other option people biking from the University Bridge to the city center really have is to take the fairly low-traffic Fairview Ave E. While this street is lovely, it has a key missing link in the middle of it that requires steep and confusing climbs through alleyways. We dream of a floating park/trail connecting the two little parks at each dead end inspired by Portland’s Eastbank Esplanade (can you imagine how awesome those views of Gas Works Park and downtown would be?). But we’re not holding our breath waiting for that to happen.

More details on the open houses, from the SDOT project webpage:

SDOT will be hosting two open house events in May

The same content will be presented at both locations.  There will be a short presentation at 6:15.  Please join us to: