Council faces a choice: Kill Pronto now or make lemonade out of the existing stations? 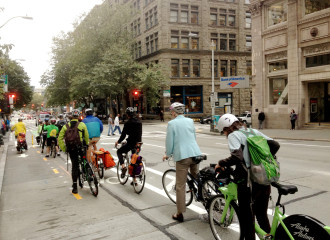 At this point, the system has spent more time operating in a state of uncertainty and controversy than it has operating normally. And that uncertainty has had a huge impact on membership and ridership. After all, few people are going to invest $85 for a year pass if they are not even sure the system will exist for that year.

We’ve already reported on the series of unfortunate political and bureaucratic missteps and unforced errors that led the system to this point. Without corrective action, there’s no reason to expect this downward spiral of bad press and declining membership to fix itself.

While the city negotiates and plans for an all-new expanded and electrified system, there seem to be three options for the existing system: Shut it down in January, continue operate at a loss, or reimagine the existing system to try out new ideas. The Council needs to choose which option to pursue in coming weeks before voting on the 2017-18 budget.

City Councilmember Lisa Herbold — with the strong support of Councilmember Tim Burgess — took a big step towards killing the current system Wednesday, proposing a change that would redirect the $600,000 for 2017-18 Pronto operating funds to go to biking, walking and school safety projects instead (see the discussion starting at 23:20 in this video).

“The replacement bid that has come in does not include funding for operations,” Herbold said, referring to the leading bike share expansion proposal by the Quebec-based Bewegen. So her redirect of funds would not necessarily impact a relaunched system.

But the existing Pronto system does need those funds. The new system is aiming for a spring/summer 2017 launch, but that timeline may prove too tight. If the launch slips too far into summer, the city will (wisely) hold the launch until spring 2018. Pronto was supposed to stay in operation until a new system is ready to launch.

In the meantime, people are still taking thousands of trips every week on the bikes. While that may not be enough trips to make the system financially solvent, those trips do matter. Shutting the system down in January would create a gap in service as long as a year and a half, and that could drive users away and make it harder to relaunch. It was not discussed, but warehousing the equipment will likely cost money, too.

Though Herbold did not specifically say during the meeting that she wants to kill the existing system in January, that’s what her proposal would do. Councilmember Burgess was a bit more direct.

“Quite frankly, I don’t know why we don’t shut down the system today,” Burgess said.

There are two Council changes to the Mayor’s bike share budget on the table for a vote next month. One would expand the existing proviso so that any new city money headed to bike share needs City Council approval first. There seems to be little opposition to that idea, even getting support from Transportation Committee Chair Mike O’Brien.

It’s not clear, however, how much support or opposition there is for Herbold’s plan to kill the system in January by redirecting its operating funds. Unfortunately, this means there could be yet another Council showdown over Pronto when budget changes come up for a vote next month. And support on the Council is obviously weaker now than it was in the winter.

“I am ambivalent at this minute about the bike share program,” said Councilmember Sally Bagshaw, who supported the buyout in early 2016. She supports what she called the “two-wheeled transit system” that Seattle could have.

“On the other hand, I feel very strongly that we invested good money in Pronto, and it wasn’t utilized anywhere near as much as was advertised, as I feel we were promised,” she said. She emphasized the need for safer bike infrastructure in addition to a better bike share system. “It’s not an ‘either/or,’ it’s an ‘and.'”

Experimenting with the existing system

Then Bagshaw threw out a new idea: Instead of killing the system or having it hobble along as is, what if we use the equipment to experiment and try new ideas.

“To the extent that we can use Pronto in a way that we can capitalize on a good strategy, such as if we were to take the Pronto bikes and rather than selling them for cents on the dollar, put them at places where we have light rail and experiment with that. Try something different before we sell it.”

Though the city is likely to get a much better price for the equipment than “cents on the dollar” (SDOT’s Andrew Glass Hastings says there is “lots of interest” from prosepctive buyers), she makes a good point about trying new ideas with the equipment we have.

And to further backup Councilmember Bagshaw’s point, there is still no Pronto station within view of any downtown transit tunnel entrance (except the bus-only station at 9th and Pine). There are stations nearby, but that’s just not good enough. Many system supporters (including this blog) have been calling for stations closer to transit entrances since it launched.

But the system’s problems go much deeper than simple station moves. The existing financial model is now doomed. There are essentially two ways to access the system today: Buy an annual membership for $85 or buy a short-term pass for $8 per day. This isn’t working. The city needs to recognize that with the system’s future uncertain, many members are not going to renew.

On the other hand, one of the most consistent complaints about the system is that the cost of entry is too high. You can’t take any rides for less than $8. That price is not working, since the number of day pass users is not growing, either.

An $8 day pass makes sense for other systems where you can reasonably expect to get your money’s worth, since there are bike share stations seemingly everywhere. It’s a screaming deal in New York City or Chicago or Washington DC, for example. But Pronto’s service area is just so small, the odds are very good that much of a person’s daily itinerary is out of range.

So what if the city added a per-ride price? In addition to the existing options, imagine you could also buy a single bike share ride for about the same fare as taking transit: $2.50 for a 30-minute ride (this is what it costs to ride Portland’s Biketown bikes). Or hell, how about $1? I don’t know if this would make more money, but if marketed well it would likely get more riders. And at least some of those new riders would likely become members of the relaunched system.

And remember, the existing Pronto equipment is not defunct. The bikes, docks and kiosks all function very well. The problems are in the system.

We could also try some more experimental ideas. What if we moved a couple stations to Columbia City, connecting the business district to the light rail station? It would be rather unconventional, sure, but it could also become popular. It’s an annoyingly long walk, which makes it a perfect bike share ride. And we could learn a lot about demand there, since future expansion plans include Columbia City.

What if we moved a station to Fremont? Again, it would be unconventional to have an outlier station like that, but it’s already common to see Pronto bikes in Fremont even without a station. So give the people what they want! And really, what is there to lose by trying? It would also give Pronto users a way to take advantage of the new Westlake bikeway.

In other words, let’s make lemonade. Let’s make serious changes to the system and try out new ideas before selling it. We can maintain service continuity for users (many of whom have already paid for service beyond January), reach new users through new pricing and station locations, and learn some valuable real-world lessons for the future system.

If you have any ideas for how to get more out of the 54 stations and 500 bikes we have now, let’s hear them in the comments below.

39 Responses to Council faces a choice: Kill Pronto now or make lemonade out of the existing stations?