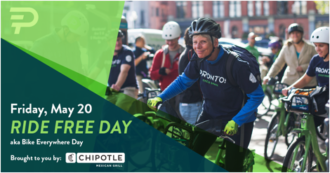 Pronto Cycle Share just had its strongest week of new membership sales since autumn October 2014, though the system still has more work to do to catch up to its 2015 membership levels.

124 people signed up during the system’s Pronto Week promotion, General Manager Demi Allen said. That puts membership levels on the upswing for the first time since the end of summer 2015, when many people who signed up before the system launched chose not to renew.

“We were pretty happy,” Allen said of Pronto Week sales. “We’re just going to stay on the marketing. And obviously the the objective is to sell more new memberships than we lose through renewals.”

The system also had its strongest ridership week of the year, perhaps because Pronto Week happened to coincide with the Viaduct closure when people were looking for other transportation options. But rides are still lagging behind 2015 levels along with memberships, so there is a lot more work to do.

After a rough start to the year for Pronto’s public image, the system still has a lot of work to do to win back support and gain new riders. So with sponsorship from Chipotle (also in need of an image boost right about now), Pronto will offer its first ever Ride Free Day on Bike Everywhere Day May 20.

People will be able to sign up online from a computer or their phone to get a promo code for a free 24-hour system pass, allowing unlimited 30-minute trips. I put “free” in quotes in the headline because usage fees apply for trips over 30 minutes as usual. Helmets are $2 to rent. Users will still need to dip their credit or debit cards to get a bike, but they won’t need to pay the initial $8 for the day pass.

Working to rebuild the user base

May 2015 memberships were at 2,246, so the current 1,936 is a couple hundred below that mark. It is common for bike share systems to lose a lot of its initial members who sign up out of excitement for the system but don’t end up finding it useful enough for their lives to renew. So you have to gain enough new members to make up for those inevitable losses.

“In San Francisco … they had a renewal rate from year one of about 50 percent,” said Allen. Pronto was seeing renewal rates in the 35–40 percent range, but that was before the system’s future was thrown into uncertainty as the City Council debated for months this winter about whether to buy it.

“During the period where there was debate about whether the system would survive, the renewal rate was lower,” said Allen. And this makes sense, because who is going to invest in a whole year of a service that might only last a couple months?

Pronto’s renewal rate was also hurt by the decision to launch the system in October, yet another lesson for other cities to stick with spring or summer launches.

“When you’re considering renewing … and you’re looking at four months of rain coming up, that’s probably going to affect your decision,” said Allen.

So not only did an October launch put a dampener on the vital initial launch excitement — an irreplaceable marketing opportunity — it also hurt renewals the next year. Pronto Week works in part to get more people may get on a spring-to-spring renewal pattern, when paying $85 on bike share is a bit more exciting.

Pronto has also recently started advertising a monthly payment plan option for annual memberships, and about a third of new members are choosing to pay monthly rather than a lump sum for the year. You save $10 if you pay up front for the year, but paying in monthly chunks of $7.95 is easier for people on a tight budget.

As we reported previously, a month of bike share costs less than Netflix.

For visitors or those who want to try it out, here’s a short video explaining how to buy and use a short-term pass:

Pronto Cycle Share and Chipotle are teaming up to celebrate Bike Everywhere Day by offering free 24-hour passes to the public on Friday, May 20.

“We’re grateful to Chipotle for creating this terrific opportunity for new users to see what bike share is all about,” noted Demi Allen, General Manager of Pronto Cycle Share. “Pronto allows riders to customize their transit experience and navigate the city on their own terms in a fun and healthy way. We look forward to sharing the experience with many new faces on May 20th.”

This promotion coincides with Bike Everywhere Day, an annual Cascade Bicycle Club event promoting bike commuting with dozens of celebration stations around Seattle on National Bike to Work Day. Pronto will be giving away free Chipotle coupons and other freebies at 2nd & Vine and Pine & Summit from 6:30-9am that morning.

This promotion comes on the heels of Pronto Week, a celebration of Seattle’s bike share system. Pronto Week was a great success, with the largest number of new individual membership sign-ups since the weeks surrounding Pronto’s 2014 launch. Pronto Week also generated the highest ridership of 2016 to date. Pronto continues its marketing and service optimization efforts to build on its current momentum in system membership and ridership.

How to Ride for Free on May 20

Register today at prontocycleshare.com/freeride to receive a free 24-Hour Access Pass code by email. Then, on Friday, May 20, use that code at any Pronto Cycle Share station to buy a 24-Hour Access Pass ($8 value) – free thanks to Chipotle. A credit or debit card is required, as standard usage fees apply to all trips over 30 minutes. Riders can take an unlimited number of rides of 30 minutes or less rides during the 24-hour period without charge – they can start a new ride at the kiosk of any Pronto station by dipping their credit card for validation and entering the number of their selected bike. Helmets are available for rental at each station, or users can bring their own. Users are encouraged to keep rental helmets for the duration of their pass. Registration is open until 11:59pm on May 20.