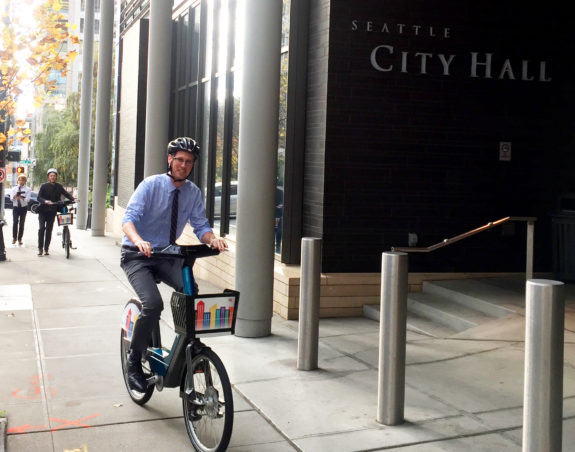 The Bewegen e-assist bike share bike is heavy, boxy and clumsy, but you can climb James Street from 2nd to 5th without even trying.

I was hoping my recent test ride of the Bewegen e-assist bike would help me make up my mind about the philosophical differences between the top two bike share expansion proposals, but I’m basically still in the same spot. Sure, an e-assist bike can climb James St, but is that better than having more stations in more places? Maybe.

The bikes did turn heads. After easily cruising up James, I was walking the bike along the sidewalk on 5th in front of City Hall and a woman stopped me and asked how I got up the hill so easily. She thought I was some kind of endurance athlete.

“It has a motor,” I told her, and her eyes lit up. She bikes to work sometimes, but these last couple blocks of hill really make it hard to get to her office. The idea of being able to check out a public bike that could cruise up the hill without a huge effort clearly had her interested.

If the city chooses to go forward with the Bewegen proposal (an action that would also require City Council approval), they will be betting that there are many more people like her who aren’t interested in biking up the hill to work on a Pronto or even their own personal bikes. And the fact that I spontaneously ran into someone exactly in line with their intended market during my short trip around the block was a good sign, even if it’s not a scientific survey.

Compared to a Pronto bike, the Bewegen is very heavy and clumsy. It’s hard to turn around in place, and the steering feels a bit twitchy. Your posture when riding is so laid back that Pronto feels like a racing bike by comparison. But that may not be a bad change.

The bikes we were testing has the power boosted essentially as high as it goes, and it was probably too high for regular use. After about a half pedal, the bike would really take off like you got a big push or kick from behind. They can adjust the power levels so it gives a big boost when needed (a big hill) but less when you don’t (cruising slowly on a flat or in a crowded area). One tricky spot I noticed is when you are starting from a stop on a steep uphill. It can be hard to get going enough that the motor kicks in (there is no shifter, so you can’t just throw it into the lowest gear to get going). But there may also be a technical solution to this.

The city plans on doing lots of real-world testing to get the power balance right. This will be a vital detail. The worst thing would be for someone to be surprised by the boost and run into someone in front of them.

There’s also the pesky issue that e-assist bikes are not technically legal on Washington State sidewalks. The problem is that the law does not currently differentiate between high-power e-bikes that are more like scooters and the e-assist bikes that simply give riders a boost while pedaling. It will take state action to change this law, so the city is working on ways for the system to work within current laws.

This remains the $5 million question. So to recap, let’s compare the pros for the top two expansion proposals:

And, of course, there’s a very different option: Kill Pronto and don’t expand it. I believe this would be a mistake and that bike share can thrive in Seattle. But this option is going to have proponents, too. There’s already a proposal in the Council budget, which appears to have the support of at least Councilmembers Herbold and Burgess, to kill Pronto at the end of 2016.

The city wants to experiment by becoming the first major US city with an all e-assist bike share system. It could go very well and set a new standard. Or it could not. That’s what makes it an experiment. In general, I support the city being bold and trying new ideas. What do you think?

Founder and Editor of Seattle Bike Blog.
View all posts by Tom Fucoloro →
This entry was posted in news and tagged bewegen, pronto emerald city cycle share. Bookmark the permalink.