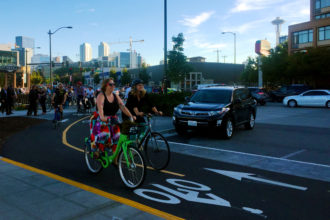 The Seattle City Council modified Mayor Ed Murray’s 2017-18 budget to remove most of the street use funds currently supporting day-to-day Pronto Cycle Share operations. Pronto as we know it will shut down by March 31.

This action closes an incredibly frustrating chapter for bike share in Seattle.

It also puts more pressure on SDOT and bid-winner Bewegen to get a strong bike share expansion plan together in time for a 2017 launch if they hope to avoid too much downtime for existing system users.

A couple thousand trips are made on Pronto every week on average, so those users will need to find a new way to get around. Members who have paid for service beyond March 31 will be offered the choice of getting the remainder back or putting their credit into the new system.

And on top of the urgency, of course, the expansion plan also needs to be very strong if it is going to win over skeptics on the City Council. Though the Council preserved Mayor Ed Murray’s $5 million to expand bike share through a new e-assist system, the funds cannot be used without further Council approval. SDOT and Bewegen will need to wow the Council and the public when they present the new plan in January.

There will be a gap between the end of Pronto service and the start of the new system. It’s possible the new system will launch in summer 2017, but any delays could get it pushed back to spring of 2018 (they are not going to repeat the mistake of launching in the fall like Pronto).

While it certainly doesn’t seem wise to remove a non-driving option for the city’s increasingly-congested city center, having a gap in service could be helpful from from a marketing point of view for the new system, said SDOT’s Director of Transit and Mobility Andrew Glass Hastings. Pronto has a bad public reputation, and a gap could help give bike share a fresh start.

Or, of course, Council could reject the expansion plan, and March 31 would be the end of bike share in Seattle for the foreseeable future. This would be a rare failure for bike share in a major city, and comes at a time when both Portland and Vancouver, BC, are starting their own systems.

The existing equipment — which thanks to the hard work of Pronto’s staff functions very dependably and has many miles left in — will be sold through the city’s surplus sales process. It’s not yet clear what the sale price will be, though Glass Hastings says there are already several interested potential buyers.

While the shutdown of Pronto is a sad end to a system that could have been a great addition to Seattle, the city seems uninterested in making significant changes to the struggling Pronto system — such as better station placements near more major transit hubs, major destinations and quality bike infrastructure or offering lower entry-level prices. If the city is not going to work to make the system work better, it’s hard to justify continued subsidy.

It didn’t need to go this way. But here we are.

Most people involved in the launch and the boggled buyout have moved on to other jobs, and there’s fresh blood in charge now. The lesson of Pronto is not that the idea of bike share failed in Seattle. The lesson is that this attempt was doomed by a long list of planning and ownership transfer missteps. Below is a recap of how it went wrong. I bring this up not to open old wounds, but to make sure we learn the right lessons.

Pronto Emerald City Cycle Share launched under the ownership of the non-profit Puget Sound Bike Share in October 2014, just as rain arrived to sap the energy out of the public excitement for the new service. The system area was unsustainably small, spread out and disconnected. Many stations were in poor locations, and many major transit stops and destinations were not directly served. Despite all this, there was excitement for the potential.

But plans to gradually add new sponsors to help fund new stations and expand to new neighborhoods were put on hold in spring 2015, when Mayor Murray announced plans to buy Pronto from the non-profit and fund a major expansion (in part, this plan was banking on winning a Federal grant the city failed to get). So before the system even had its first summer, the non-profit ditched its original plan and worked instead to transfer ownership to the city.

As the city buyout kept getting delayed later into 2015, the system kept losing money without adding new service or sponsorship. Many people in the non-profit’s leadership left. Founding members were asked to renew right as the October rains rolled in again, and many chose not to for various reasons. By the end of the year, the system ran out of cash and was in need of city funds to avoid a shutdown.

The City Council put a proviso on the budget requiring Council approval before the city could purchase the system, but they didn’t technically prevent SDOT from using street use fees to help keep the system afloat. SDOT spent $305,000 to support operations before the Council voted, which many Councilmembers took as in conflict with the intent of their proviso.

The City Council voted 7-2 to approve a $1.4 million buyout of the system in March 2016 after months of debates and research into the struggling system’s finances (with Councilmembers Burgess and Herbold voting against). But the public debate had damaged the system’s already-struggling reputation.

On top of this, SDOT Director Scott Kubly’s history as President of Alta Bicycle Share before coming to SDOT drew an ethics complaint. Alta Bicycle Share was later bought by Motivate, and Kubly has no financial ties to the new company. His previous position was noted publicly in Mayor Ed Murray’s announcement as a benefit for a city about to launch bike share, so it wasn’t a secret. But Kubly had been working to manage the system buyout talks without getting the proper ethics waiver first. He admitted the lapse and was fined $5,000. It was not a scandal of epic proportions, but it damaged his reputation along with Pronto.

With Pronto’s future uncertain, members stopped renewing their annual memberships. After all, who is going to pay for a year of service if they aren’t sure it will last that long? And since the lowest barrier to entry is $8 for a 24-hour pass, non-renewing members are likely to simply stop using the system entirely rather than paying the daily rates, reducing system use even further. This accelerated the system’s financial death spiral, and aside from a few quality station moves, nothing significant has been done to stop the decline.

If they aren’t going to fix it, then I guess shutting it down is the only option that makes sense.

Founder and Editor of Seattle Bike Blog.
View all posts by Tom Fucoloro →
This entry was posted in news and tagged 2017 budget, pronto emerald city cycle share. Bookmark the permalink.