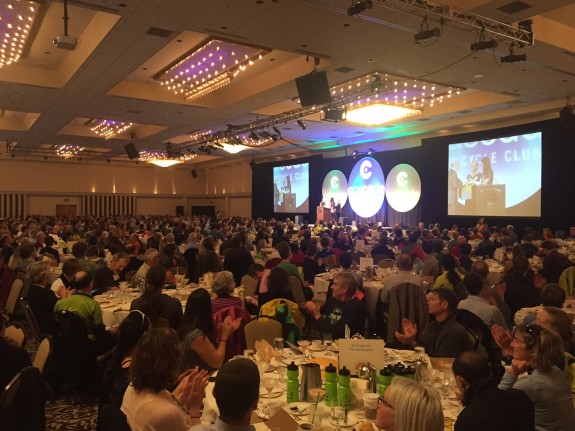 Mayor Ed Murray announced early plans for a big expansion of Pronto Cycle Share to bring the system to more Seattle neighborhoods, especially to low-income neighborhoods where access to a working bicycle is a major barrier.

“It’s not gonna be easy, and we’re gonna need help from the Federal government,” Murray said to the crowd gathered downtown for the annual Bike Month Breakfast hosted by Cascade Bicycle Club. There were no further specifics on the plan, but stay tuned.

The idea came in part from conversations Murray and SDOT Director Scott Kubly have had recently with leaders of minority and refugee groups who, Murray said, were not excited about further Bike Plan investments. Murray challenged bike organizations and the bike and environmental movement in general to work hard to expand diversity in membership and leadership.

Major Taylor Project grad Brook Negussie (now a UW student) was the MC for the night and talked about how empowering the program as for him. And Cascade Diversity & Inclusion Director Ed Ewing said they plan to continue growing the program this year. But there’s still so much more bike advocates can do to welcome and empower everyone through safe streets and bicycling.

During the keynote, Lisa Brandenburg of Seattle Children’s spoke about all the work her organization has done to promote biking to work, which has succeeded in reaching an eight percent bike commute rate. That’s way higher than the city average (about four percent) and really impressive for a campus outside the Seattle city center.

But she went beyond just bragging about their awesome bike center. She also connected the value of biking to work to issues their patients face every day. The number one issue patients at Seattle Children’s face now is asthma. And growing research is showing the connection between air pollution and lung infections that can be dangerous for kids with cycstic fibrosis, she said. Biking is part of the way we can improve the air we and our children breathe.

She also pointed out that if every workplace in Seattle was able to get their drive-alone commute rates down to Seattle Chidren’s goal of 30 percent (they’re not too far), “traffic congestion would be a thing of the past.”

Davey Oil gets an award! 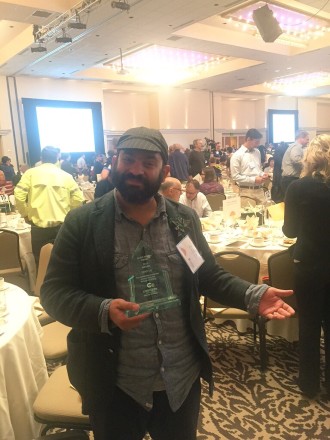 I was so excited to see Davey Oil or G&O Family Cyclery get recognized for “showing exceptional leadership in improving lives through bicycling.” Formerly the head of adult programs at Bike Works, Oil started G&O with Tyler Gillies in 2013. The shop has had a transformative effect on family biking in the city, which has seen an explosion in popularity in recent years.

But I’m not at all surprised by how effective G&O has been at making family and cargo biking seem welcoming and fun because Davey is basically just a transformative person to meet and know. He was there when I wrote my first ever story about biking in Seattle (a story about Bike Works for Real Change), and his enthusiasm and respect for the people he meets was one reason I felt drawn to dedicate so much of my time diving deeper into this whole biking in Seattle thing.

It’s also why my fiance Kelli and I asked him to officiate our wedding!