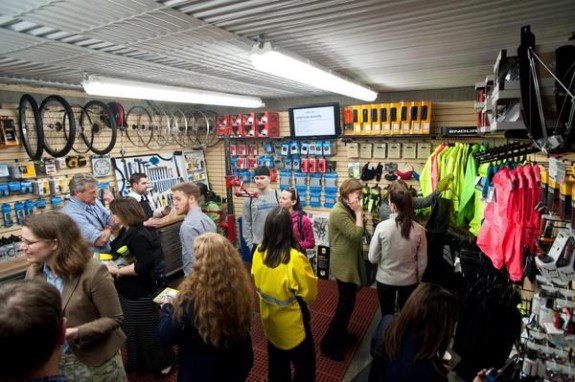 You’re on your way to work when your bike starts go get harder and harder to pedal. You try to ignore it, as though that might make the problem go away. But of course it doesn’t. You pull over and confirm: You have a flat.

Now image this: Instead of fixing the flat right there on the spot, you can just put your bike on a bus and take it to your workplace’s on-site bike shop. By the time your shift is over, your bike has two fully-inflated tires. They even gave it a tune-up while they had it. The cost to you: Free.

Seattle Children’s is the Seattle area’s major institution leader in encouraging employees to bike to work. Not only do they try ambitious ideas and back them up with funding, but they also get results.

More than 8 percent of Seattle Children’s employees bike to work, a feat that is extra impressive since their location in the Laurelhurst neighborhood is not in a centrally-located, dense neighborhood. But they do have one big asset: the Burke-Gilman Trail goes nearby. And they take full advantage of it. 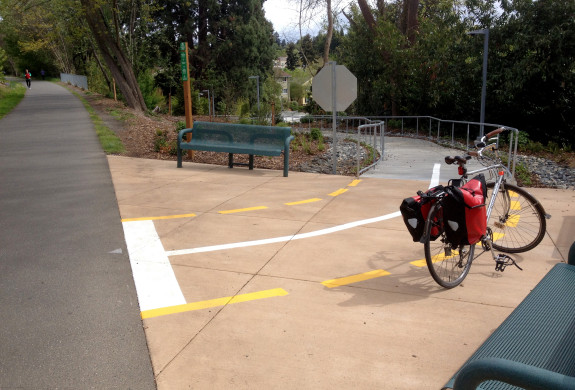 New connection to the Burke-Gilman Trail 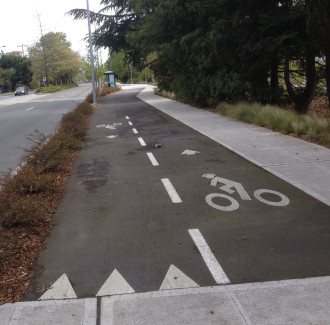 As part of a recent campus expansion, Seattle Children’s constructed a brand new trail connection, a section of protected bike lane and a neighborhood greenway. By creating safer, easier and more direct bike connections, they figured more people would see biking as a viable option to get to work.

Oh, and they were one of the first organizations to step up and sponsor Pronto Cycle Share, earning them a station near their campus.

And it all seems to be working. Their commute plan originally called for ten percent of employees to bike to work by 2030. They’re already getting pretty close 15 years early.

Now they are going yet another step further. Seattle Children’s just opened a full service bike shop for employees. Workers can buy parts and get work done for free or at significant discount, and the repairs can happen during their shifts.

While having a safe route to bike to work is one common barrier, keeping a bike in working order is another. Seattle Children’s has invested in both issues. Of course they are ahead on their bike commute goals.

More details on the Bicycle Service Center from Seattle Children’s:

Seattle Children’s is one of only a handful of companies in the nation that offer such a service for employees.

“Seattle Children’s is committed to making bike commuting easy for faculty and staff,” said Lisa Brandenburg, hospital president, who is a bike commuter. “Seattle Children’s Staff Bicycle Service Center is an example of the type of creative project that has made us a leader in reducing drive-alone commute trips, not just in our city but in the country.”

Though Seattle Children’s has offered on-site bike maintenance from mobile bike mechanics for years, the Bicycle Service Center expands this offering by bringing a comprehensive bike shop to campus, all under one roof. The full-service repair shop will offer the following:

As part of its expansion plan, Seattle Children’s made a commitment to its neighbors and the City of Seattle to reduce the percentage of staff driving alone to work to just 30% by 2030. The plan calls for 10% of the hospital-based workforce to commute by bike.

“Growing the number of employees commuting by bike not only reduces our environmental footprint and contributes to the health and wellness of our staff, but it also allows Seattle Children’s to increase our capacity and ability to provide world-class healthcare to every child in the region who needs us,” said Brandenburg.

Currently, more than 8% of Seattle Children’s main campus workforce commutes by bicycle. With the addition of the Bicycle Service Center, Seattle Children’s aims to support its current bike commuters and recruit those who may still be on the fence in order to reach the 10% goal outlined in the expansion plan.

Councilmembers Jean Godden and Sally Bagshaw have praised the effort. And Bagshaw asked the big question: “Who’s next, Seattle?”

Anyone else know of another workplace in the area with anything like this? Let us know in the comments below.