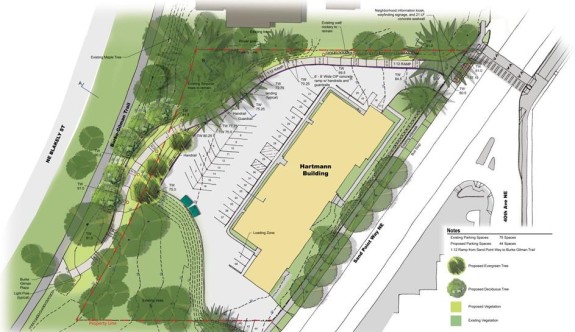 Seattle Children’s began work last week on a new link to the Burke-Gilman Trail that will connect their expanding campus to the trail. The new trail link will also provide a good connection for many Laurelhurst homes and destinations.

Work should be completed sometime this winter or early spring.

The project is just one part of Seattle Children’s walking and biking improvements in the area. They footed the bill for the 39th Ave NE neighborhood greenway as a way to both increase safety for families in the area and as a way to encourage employees and visitors to walk or bike to their expanding campus.

Details on the trail link, from Seattle Children’s:

The ADA-compliant link will traverse the Hartmann Building property and tie the trail to the new traffic signal/crosswalk at Sand Point Way NE and the new cycle track that runs in front of the hospital.

…Work will take place on weekdays only – no weekends or holidays – between 7 a.m.-5 p.m. No noisy machinery will operate between 7-8 a.m.

The project involves grading  and paving, building fences and retaining walls and installing signage and landscaping. The landscaping work will complete efforts by the Friends of the Burke-Gilman Trail to replace invasive plants with native vegetation. The trail will remain open during construction and all work will be staged from the Hartmann site.

The trail connection is part of our Livable Streets Initiative – a series of transportation-related improvements made in association with our Building Hope expansion. To make room for Building Hope, we asked the city to vacate portions of 41st Street NE and 46th Avenue NE. In exchange, we agreed to invest in public amenities such as the trail connection and the William and June Boeing Park and Garden Walk at 40th Avenue NE and NE 45th Street.

This entry was posted in news and tagged burke-gilman trail, laurelhurst, seattle children's. Bookmark the permalink.