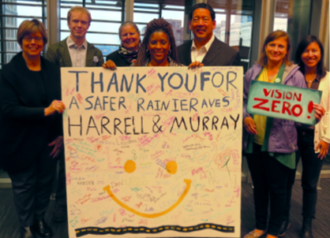 We already reported on the most immediately-dramatic budget change, when the City Council pulled funding for Pronto Cycle Share beyond March 31. The Council did preserve Mayor Murray’s bike share expansion funds pending further Council approval. But beyond bike share, there are some major wins both from the Mayor’s original budget and from the City Council’s additions.

While Rainier Ave will get $1 million to help extend its recent safety project from Hillman City to Rainier Beach, Seattle Neighborhood Greenways’ attempt to dramatically increase the city’s Vision Zero funding didn’t catch on. For me, this is the biggest missed opportunity of this budget. Perhaps with a more clear plan for how the city can use the additional funds to scale up its successful Road Safety Corridor program, this effort will have a better chance next year. Because fixing a corridor or two a year just isn’t fast enough.

But still, there are a lot of great investments in this budget. Seattle Neighborhood Greenways highlighted these wins:

Cascade Bicycle Club is also praising the budget, and even has a handy online tool so you can thank the mayor and City Council. They highlight:

Founder and Editor of Seattle Bike Blog.
View all posts by Tom Fucoloro →
This entry was posted in news and tagged 2017 budget, rainier ave. Bookmark the permalink.