A sober look at Pronto’s finances ahead of Council meeting 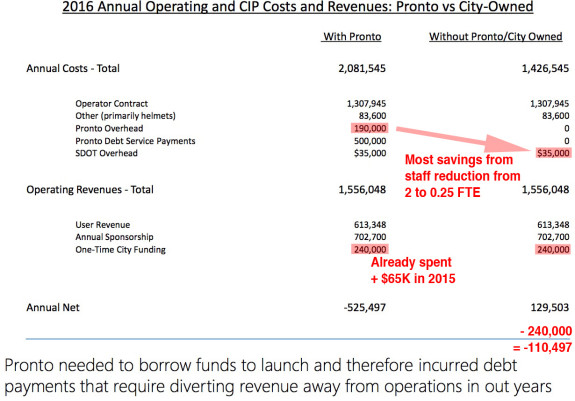 The City of Seattle already cut checks in December and early 2016 totaling $305,000 to keep Pronto Cycle Share operational, Josh Feit at Publicola reports. This revelation will certainly be a topic of conversation during tomorrow’s 2 p.m. Transportation Committee meeting about the system.

These payments were included in a slide we published in late January, and looking back I now see that SDOT noted it as “street use funds already utilized.” But this line did not come up significantly during the Council meeting, and it’s budgeted as “revenue” in the bike share system’s budget which puts the presented bottom line in the black.

In other words, the proposed $1.4 million is a buyout, since the city is purchasing assets (and getting a good deal as you will see below). But the $305,000 is a bailout, a cash injection to keep the system afloat.

The use of these fees was authorized, SDOT’s Barbara Gray told Feit, because street use fees can be used for bike programming. But these funds should be properly located in the system’s figures so we get an accurate picture of the financial situation.

The updated budget SDOT will present tomorrow (PDF) also includes SDOT staff time to manage the system, but only at 0.25 FTE (budgeting language for 0.25 of a full-time job). Puget Sound Bike Share, on the other hand, had 2 FTE on staff. It’s worrying that the city only plans to put 13 percent as much staff time into system management. It’s going to take a lot more work than that for the system to succeed.

So if you add in more staff time (let’s say at least 1 FTE at the presented rate), then our bottom line is more like -$215,497. Of course if the city hires extra staff to raise sponsorship funds and win grants like they should, then they could more than pay for themselves and help fill this budget gap.

As we wrote last week, bike share absolutely can flourish in Seattle. There were human-made mistakes in the launch (the U District satellite is too small and too far from the core, leading to dismal ridership there) and in management (the transfer from the non-profit Puget Sound Bike Share to the city was botched) that are holding it back.

Pile on the added costs for the helmet system (~$84K budgeted in 2016 alone) and reduced use due to the helmet requirement (Seattle is among the only major cities with this law, and the original business plan for Pronto estimated a 30 percent reduction in use due to the requirement), and the results really aren’t a big surprise.

But in the core of the system, ridership is healthy and ready to grow as more stations are added. Add in major planned-but-delayed bike network improvements and the system is poised to thrive.

We haven’t given bike share a fair shot yet. The city needs to regroup and come up with a realistic plan forward based on actual usage to get the system back on its feet.

And build the Center City Bike Network already so people who don’t want to bike mixed with busy downtown traffic can use the system, too. That may be enough to close the budget gap all on its own.

Buying Pronto is a great deal 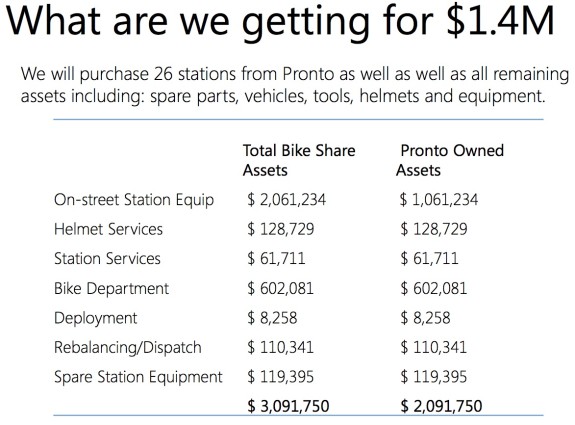 One key piece missing from Pronto coverage so far — especially outside Seattle Bike Blog — is that the $1.4 million for Pronto is a killer deal. SDOT’s accounting suggests the city is getting $2.1 million in assets at that $1.4 million price. That’s a $690,000 discount.

Sure, the purchase comes with the caveat that the system could have operations costs going forward (depending on factors we’ve already talked about), so it’s SDOT’s job to convince the Council and Seattle residents that they can manage and expand the system effectively.

Of course, no other transportation system is asked to cover all of its own operational costs. Buses are subsidized, roads for cars are very subsidized, so why is bike share different?

Well, for one, it sort of said it would cover its costs and then didn’t. So that’s a problem of setting expectations too high.

But as we consider expanding the system, the question of subsidy needs to be front-and-center, especially when discussing equity.

SDOT’s draft expansion plan includes Rainier Valley, an area with a lower density of housing and destinations than a bike share system would typically seek out in order to recoup its operational costs or pull a profit. But if the city is going to invest in bike share, it needs to do so with a lens of access for everyone regardless of race or income. And one way to do that is to put stations in neighborhoods with low-income and diverse populations.

The SDOT plan calls for at least 20 percent of stations to be in low-income neighborhoods, in addition to outreach and low-income membership plans.

Phyllis Porter with Rainier Valley Greenways and Rainier Riders served on the Pronto equity committee and spoke to City Council about her hopes to see Pronto in Rainier Valley to connect with schools and transit (14:10 mark in this video).

For much of the neighborhood, light rail travels on MLK while far more destinations are on Rainier. Most homes are a significant walk from light rail, but within perfect bike share distance. And bike share helps meet healthy living goals that extend beyond transportation and that are worthy of investment.

So rather than trying to get Pronto to break even, perhaps we need to start talking about what goals within Pronto are worth city investment. It’s bad policy to just bail out costs that could be recouped with better management, but it’s good policy to subsidize value for people who need low-cost and healthy transportation options.

Here’s the city’s basic priorities to weigh these goals:

If we doubled the number of bikes and stations, the system would see more than triple the number of trips and double the user revenue, according to SDOT analysis. That’s because of the “network effect” that occurs as you expand the service area.

Basically, adding a new station to a network does not simply add one station of value to the system because it also adds value to all the existing stations, too. With each new destination added, all other stations add one more destination to their system’s reach.

It’s the same principal as light rail stations, but on a much more granular level. When U Link opens next month, Capitol Hill Station does not only add value to Capitol Hill. It also adds value to Beacon Hill and Rainier Valley stations that now have one-train access to Capitol Hill. Same with UW Station.

And same with bike share. When we add Fremont to the system for example, that’s not just good for those Fremont stations. Now stations on Capitol Hill or the U District have access to Fremont and become that much more useful than they are today.

When you hear people’s feedback about Pronto, one of the most common is that there aren’t stations where the person is trying to go. Expansion is the only solution to this problem.

SDOT’s plan is to stabilize the system in 2016 and develop an expansion plan they hope to launch in 2017. Later this year, the city will put out a request for bids from operators so the city can analyze its options for expansion. 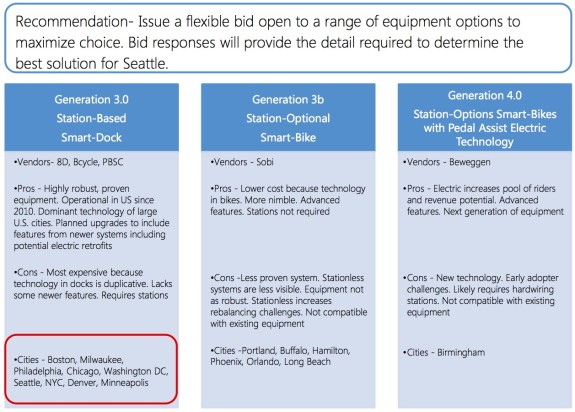 There’s still talk of an e-bike system, but that would likely limit the number of stations the city can buy.

There have been a lot of questions about SDOT Director Scott Kubly’s previous position as President of Alta Bicycle Share (which was bought out by current Pronto operator Motivate after Kubly left to join SDOT). Of course, his previous experience is either an asset to the city or a conflict of interest depending on how you look at it. His experience should help him launch a successful system here, which we need. But it also makes the funding requests look fishy, which is one reason the City Council attached a proviso to the funds during the budget process.

So the bidding process would be open to all operators. But you’d have to think Motivate has a huge head start since we already have 500 of their bikes and 54 of their stations. I guess we’ll see.

Bike share in Seattle is not a failure, and letting it die after a clearly botched year and four months is hardly good governance. Returning the bikes would put the city on the hook for $1.15 million in grant money we would have to return, according to SDOT figures (the Times Ed Board says Seattle should “give” the stations to the Eastside to avoid grant payments, but the grants are for specific geographic areas and would still need to be paid back by someone. It also seems like throwing in the towel far too early). This is not yet the sunk-cost fallacy (“throwing good money after bad”) because we haven’t fully tried to make our initial investments work. Pronto isn’t Bertha.

The biggest question for Council is not whether bike share can succeed in Seattle but whether we can trust SDOT to manage this system to success. And to be fair, part of the trouble comes because the city threw a Hail Mary with their impressive Federal TIGER grant proposal, but they didn’t get it. It was a high risk play with huge potential gains. Had they won, we would be having a much different and much more exciting conversation right now. But TIGER is just too competitive (of the 629 eligible proposals, only 39 were picked).

So now it’s on SDOT to make the case that despite these hiccups, they are ready to take on the task of bike share ownership. This rough transition hasn’t inspired confidence, but it’s a task the city should be capable of handling.