With the City Council debating whether to buy out the 54-station Pronto Cycle Share system already in need of a buyout, the main question on people’s minds is: How do we know it will be successful going forward and worth that investment?

Bike share in Seattle absolutely can succeed and flourish, but it’s not guaranteed. A financially sustainable system is going to take realistic planning and hard work selling sponsorships, winning grants and expanding ridership.

In other words, it’s going to take require both skillful management inside the Pronto office and bold bicycle network improvements on the streets.

In our previous story, we dove into some of the management problems and miscommunications within the non-profit Puget Sound Bike Share and the City of Seattle that led to this Council buyout showdown. In our research, we learned that ridership did not meet the (likely inflated) budget projections, but necessary work to sell sponsorships and win grants to fill those budget holes also did not happen. So that’s a somewhat easy fix: Adjust the budget based on our more realistic ridership numbers and do the fundraising work necessary to make ends meet.

The ultimate way to increase success is to expand the system to increase the network and the number of destinations it connects. The city is currently developing an expansion plan with hopes to launch it in 2017.

Below are some other ideas for getting a handle on the existing system and better understanding what’s holding it back.

Write off the U District stations 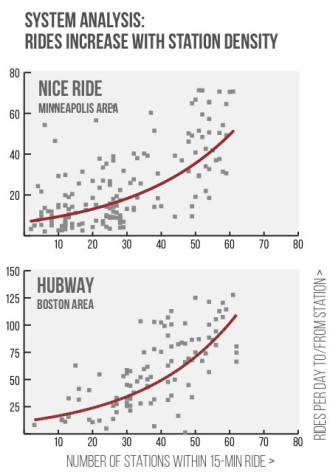 The 14 stations in the U District perform terribly, and their low use brings down the stats for the rest of the system. As a national study released after the launch of Pronto shows, the density of a connected network is vital to bike share success. Opening a bike share service area split into two is a doomed idea because then neither mini-network is big enough to make enough trips worth biking. Why pay for bike share when you can just walk?

But Puget Sound Bike Share won a grant specifically for U District stations, so they likely need to remain there to comply (though it is worth researching the options to help bolster the central system area).

While better placement (and the March opening of U Link) can help U District stations work a bit better, the only way to make them truly succeed is to grow the system out and around the neighborhood. If at least Fremont, Wallingford, north Capitol Hill and the north University neighborhoods had stations, far more U District trips would be possible and convenient using Pronto.

But until the system expands north, the city needs to accept that these stations are going to underperform and plan accordingly.

Perhaps the most important way to bring Pronto to life is to unleash the delayed Center City Bike Network.

The most popular stations in the system today are in the Center City service area, but people must be willing to bike mixed with busy traffic in order to use them. And there are only so many people who are ever going to find that appealing.

But there’s a clear answer to this problem: Build the planned Center City Bike Network.

When the city opened the 2nd Ave protected bike lane in 2014, it was intended to be a demonstration project so SDOT staff could work out design kinks and people downtown could get used to the concept of a more modern and more comfortable bike lane. But the plan was to follow-up and connect the pilot bike lane to other bike routes to and through downtown. Yet it is now 2016, and there have been no new bike lanes downtown since.

This is a big problem for Pronto, because here is the disconnected bike network its users have to work with: 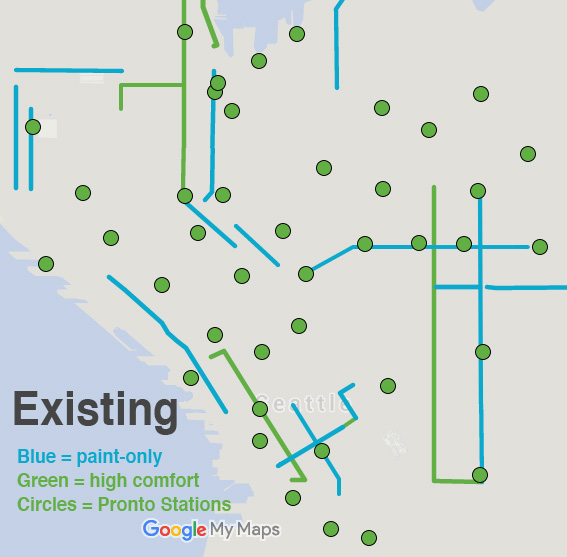 I only included bike facilities that play a significant role in the bike network, even if they are substandard (marked in blue).

When you look at how disconnected the bike network is, it’s almost surprising the system gets as many rides as it does.

The good news is that the city has already put years of work into developing a Center City Bike Network, which would create a connected grid of bike facilities aimed at reaching people of all ages and abilities. In June, the city held a big open house that was extremely well-received and presented a series of options ready for implementation in 2016. The city’s short term bike plan from early last year also included the city’s planned 2016 bike lanes downtown.

Here’s what Pronto’s service area could look like if the Center City Bike Network’s 2016 projects went in this year as scheduled: 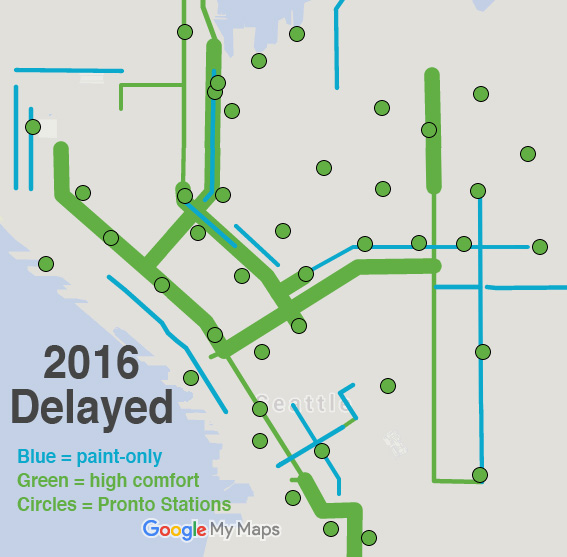 And here’s what that change looks like in GIF form (updated):

The Westlake Bikeway is under construction and due to open this year. According to a presentation to the Seattle Bicycle Advisory Board, the city also plans a protected bike lane connection from the new bikeway down 9th Ave and then on Bell and/or Blanchard to 2nd Ave. But that’s it. All other Center City Bike Network projects have been put on hold pending a step in the Center City Mobility Plan.

Wait, huh? Did I just say the Center City Bike Network Plan based on the Bicycle Master Plan is delayed because of yet another plan called the Center City Mobility Plan? Sadly, yes I did.

The Center City Mobility Plan is a $1.5 million plan basically to deal with how traffic and buses will flow years from now once the downtown transit tunnel becomes light rail only. That seems like a good thing to plan for, of course. But the city shouldn’t wait for it before conducting outreach and further design work for the bike lane network, especially the sections we know won’t be affected (like 7th Ave or extending the 2nd Ave bike lane north). This work can happen in parallel with the Center City Mobility Plan.

Seattle voted heavily for Move Seattle and the vision it represented. We have been planning the Center City Bike Network for years. There is no better time to act than right now in 2016. Let’s show the people what they voted for by finally, for the first time in generations, opening our downtown to low-stress bicycling. We may just save bike share while we’re at it.

We’ve written many times about how King County’s rare all-ages helmet law provides an unnecessary challenge to running a successful bike share system. Not only does the extra hassle limit spontaneous trips, but the addition of helmet vending boxes and the process for cleaning and refilling helmet bins is also costly on a daily maintenance level.

Many other cities, including Dallas just last year, repealed their all-ages helmet laws to help bike share succeed. It’s a well-intentioned law that has unintended consequences. Bike share is safe and good for public health. Let’s follow the success of other cities and remove the helmet requirement, at least for adults.

There’s a petition going around if you want to sign on.

*To get these estimates, I used James Wing’s Prontolyzer to see station trip data. I split the system into two: A 15-station, 150-bike system north of SLU and a 35-station, 350-bike Center City system. So U District/Eastlake saw 16,183 rides per 150 bikes while Center City saw 124,557 rides per 350 bikes. The numbers are a bit muddy because four stations came online during the year and do not have a full year of data. I excluded these stations and their trips in the calculations.