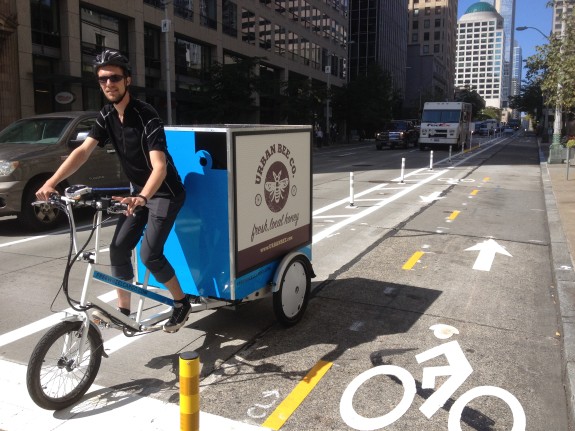 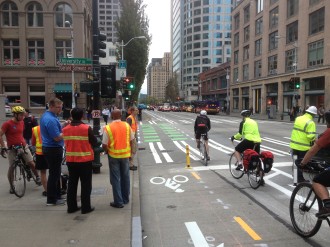 In its third day of operation, the 2nd Ave protected bike lane continues to wow people and transform the way people (and goods) get around downtown.

The new bike lane — separated from car traffic by either a row of parked cars or a painted buffer lined with reflective plastic posts — feels far safer to use than the previous skinny bike lane or any other central downtown street. It also allows two-way travel for people biking, which has opened up all new bike route options.

Nearly every SDOT staffer I spoke with was amazed at how quickly so many people started biking north on the bikeway, revealing a huge pent-up demand for moving north through this part of downtown. Previously, people either needed to climb way up to 4th (a huge hill at many points downtown) or take scary routes on busy 1st Ave or bus-filled 3rd Ave. Or, of course, many people simply biked up the packed sidewalk on 2nd. The uphill grade on 2nd is smooth and easy, and even though you are likely to hit a red light every two blocks or so, that’s a fine trade for a less stressful route.

SDOT collected lots of bike use data before implementing the new bike lane, and they have been counting bikes on the bikeway since it opened. That data should be available soon (stay tuned).

But the safety of the bike lane depends on people driving and biking understanding and following the traffic signals designed to prevent conflicts at intersections. Many people either misunderstand or disregard the red arrows and red bike signals and proceed anyway, a problem the city is aware of.

Volunteer ambassadors and SDOT staff have been out along the new bike lane helping to teach people driving and biking how the new lane and signals work, and those efforts appear to have been somewhat effective. Fewer people seemed to run the red left turn arrows and red bike signals on day two according to our non-scientific observations, a sign that people who use the street regularly learned their lesson on the first day and now use it properly. 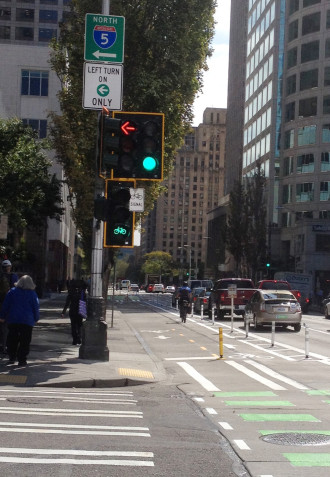 Here’s an example: Some people on bikes would fail to stop at the red bike signal heading downhill at University, one of the first major left turn intersections on the project. Ambassadors and SDOT staff would yell at them to look for the bike signals, since it is likely they just saw the green ball for car traffic and assumed that was for them. Further down the route at left turn intersections like Marion or Cherry, nearly every person biking would stop at the red bike signal. So they got the message after screwing it up the first time, which is good. But it’s not good enough. People need to get the message the first time before a conflict occurs.

People biking uphill have only one signal facing them: The bike signal. I’m not sure I ever saw someone run that red light, suggesting that the downhill light runners were not able to fully digest what all the signals meant by the time they got to the intersection.

A similar problem is likely facing people making left turns. Most people want to follow the rules, but somehow seeing a red left arrow is not enough to stop left turns. Crosscut reports that the city has observed the problem and it planning some tweaks to the intersection design to help make things more clear. 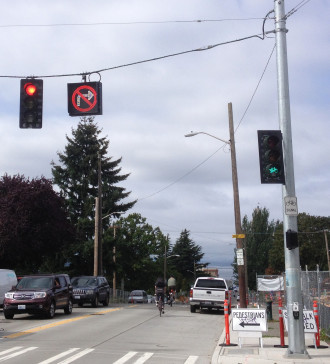 At Yesler and Broadway.

One plan is to replace the signs reading “Left Turn On [Green Arrow] Only” to the more direct and familiar signs saying they cannot turn on a red arrow. They will also change the green ball (which tells other car traffic on 2nd they can go straight) to an up arrow, further differentiating it from the red left arrow.

If that does not work, perhaps the city can use an electronic no turn signal like the one in place at Broadway and Yesler. That sign illuminates only when turns are not allowed.

Seattle police officers were also out along 2nd Ave Tuesday making traffic stops along the route to help with enforcement. Enforcement is needed for people who knowingly disregard the law (this did happen), but clear design is more important to prevent confusion for the vast majority of people who want to follow the rules. 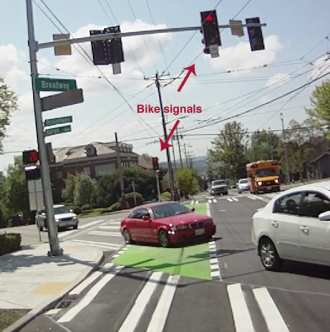 One idea that could help make the bike signal more clear would be to have the signal in two locations: One where it is on the far side of the intersection and one on the near side (where it would be the only signal and, therefore, harder to miss).

The city used near and far bike signals on some confusing locations on the Broadway Bikeway like Boren. This concept is also commonly used on protected bike lanes in Europe (sometimes Dutch intersections have even more than two bike signals to guide people through).

The city is also finishing up work at the intersection with Pike, which had been rather uncomfortable in the first couple days. But the work does not address the most common complaint I have heard about the bike lane: Why isn’t it longer?

Stay tuned for more thoughts on which connections are most needed now that the most central piece has been completed.

UPDATE (9/11): The city has already made several changes, including swapping the signs out to read “no turn on red” and changing the green balls to up arrows: 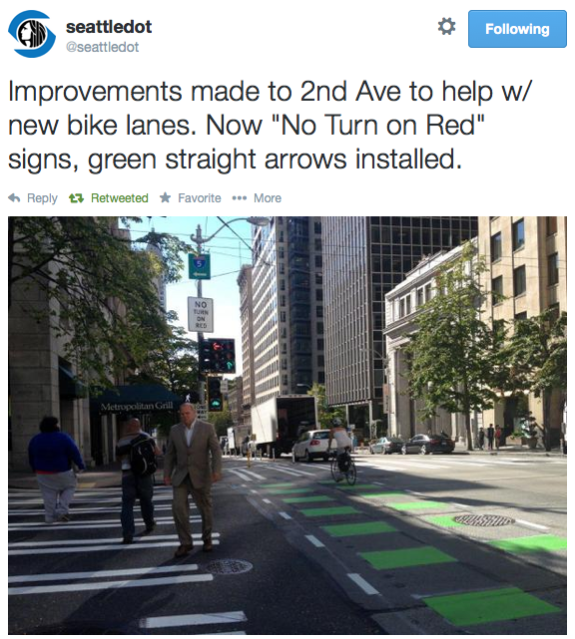 Founder and Editor of Seattle Bike Blog.
View all posts by Tom Fucoloro →
This entry was posted in news and tagged 2nd ave, downtown, protected bike lanes. Bookmark the permalink.