When the city finally upgraded the old skinny paint-only door zone bike lane on 2nd Ave in 2014, it was an incredible increase in biking comfort downtown. But almost immediately after opening one thing became clear: The array of signals hanging on just one street post was confusing people.

Most of downtown Seattle has traffic signals on the sides, not hanging over the center of the street. When the only information you need to convey is start or stop, this isn’t such a big deal. But when the new bike lane and left turn signals joined the walk and through-traffic signals, the post simply got overloaded with info. There could be a walk signal, a green bike, a red left arrow, a “No Turn on Red” sign and a green circle (later changed to an up arrow) all grouped next to each other.

The result was some people in cars turning left across the bike lane when bikes had the green and some people on bikes going through a red because they were looking at the green up arrow. Most people followed the signals correctly, but “most” just isn’t good enough when such serious safety issues are concerned.

So as part of the city’s regular signal maintenance program, SDOT has started replacing the old signals with a more modern style spanning 2nd Ave. This way each lane gets its own signal, making it abundantly clear who should go and who should wait.

“We are focusing on 2nd Avenue because it’s the one over time that’s been having problems,” said Seattle Traffic Engineer Dongho Chang. “We would like to do all of them all the way [from University] down to Cherry.”

Chang said the signals did not go in with the bike lane because that project was an expedited safety project. The city put in an unprecedented effort and built the 2nd Ave pilot project in a matter of months, which is basically light speed in traffic engineering terms.

Sadly, their fears about the danger of the old bike lane were far too correct. Just ten days before the new bike lane opened, Sher Kung was killed at 2nd and University when a man driving a truck turned into her.

Going forward, bike lanes on an expedited schedule may still precede signal upgrades, but any bike lane that is part of a major capital project would get signal upgrades at launch.

“If it’s a capital project, we’d want to get it right the first time,” said Chang. 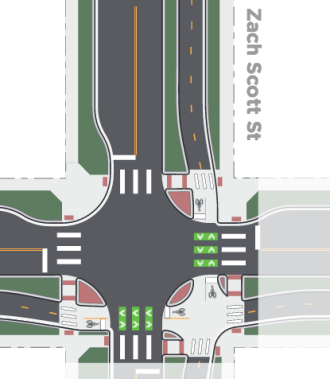 Example design in Austin, via Alta’s “Evolution of the Protected Intersection.”

In other words, it’s the age-old question of quantity vs quality. Realistically, Seattle needs both strategies. We can’t always wait for big, slow-moving capital projects before making bike network upgrades.

We should expedite a fully connected center city bike network, for example, even if all the signals aren’t upgraded by the time they open. But we also shouldn’t cut corners on safety and should make interim improvements before the full upgrades are complete. In other words, SDOT needs to become pioneers in building protected intersections, both low-cost and all-out versions.

The city had previously studied compliance rates under the old signal configuration at 2nd and University, and they will be studying to see how the new signal changes behavior.

In a completely unscientific study, I sat at the intersection for 25 minutes Monday afternoon and not a single person ran any of the lights (other that the usual fudging of the yellow). It’s pretty hard to mess up at this point.

I suspect many of the people disobeying the lights previously were knowingly breaking the law, but the new signals make it so obvious that they pretty much remove all doubt.

Have you been through 2nd and University since Monday? Let us know your thoughts in the comments below.