UPDATE: Here’s a graph from SDOT: 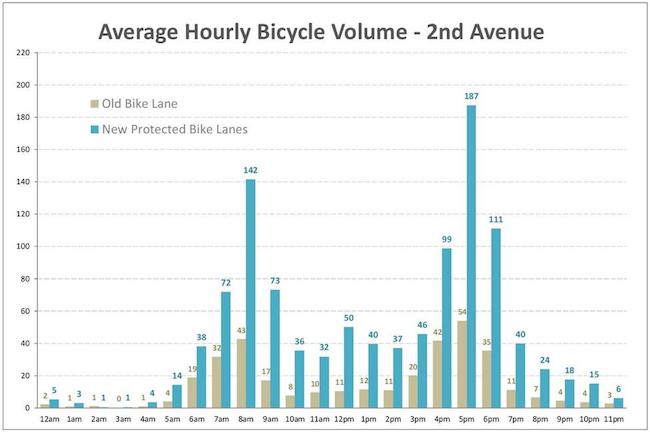 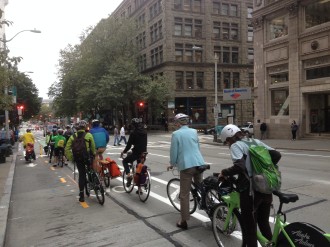 It was clear from day one that bike use on 2nd Ave was higher than normal. But new data collected by SDOT staff shows just how much a safe bike lane can draw people. Bike trips on the street tripled.

Part of this increase is certainly the fact that the new lane is bi-directional, where formerly the street only allowed southbound trips. So it might make sense if trips doubled due to people reversing their route for the return trip. But trips tripled, showing that the bike lane has attracted a lot of new users, either from nearby streets or new bike trips entirely.

And all this happened with minimal impact to traffic flow. Traffic studies show that motor vehicles took about a minute longer to get down the street that usual, but that was during a week with an abnormally busy sports event schedule. SDOT staff predicts the actual impact on travel times will end up being even lower.

SDOT data also shows that changes in signage and the excellent educational outreach efforts by Cascade Bicycle Club volunteers and SDOT staff has all but cleared up driver confusion that was a problem the first couple days. Of 52 people trying to turn left from 2nd onto Spring Street, only two made illegal turns while the red arrow was showing. This is a dramatic turnaround from the first couple days when illegal turns were rampant.

Of course, the biggest complaint I hear continues to be that all the streets around this new protected bike lane remain dangerous and stressful for biking. Getting to 2nd from any of the city’s neighborhood bike routes remains a daunting experience, and much of the previous dangerous 2nd Ave bike lane still remains north and south of the project area.

If this 0.7 mile stretch of protected bike lane was meant to demonstrate the potential safe bike lanes can bring to Seattle’s city center, consider it a resounding success. Now let’s get to work finishing the safe bike lane network.

Oh, and great work, SDOT! You deserve this victory lap. Here’s the press release from the city:

The Seattle Department of Transportation (SDOT) today released data for the new Second Avenue Protected Bike Lane that shows bicycle ridership has tripled due to the new facility. With the conversion of the former one-way bike lane to a two-way, protected bike lane, an average of 1,099 bicyclists a day used the new lane on September 9, 10 and 11 according to electronic counters. This is three times the daily number of cyclists that had previously used the former one-way bike lane.

“I am pleased that the new Second Avenue bike lane is addressing Seattle’s need for a safer, more predictable route through downtown,” said Mayor Ed Murray. “These changes help enhance safety for everyone and make Seattle better prepared for the launch of Pronto! Cycle Share in October.”

SDOT and the Cascade Bicycle Club teamed up for an education/outreach campaign, and staff was positioned at left turn locations to remind motorists and bicyclists to observe the signals. Based upon feedback obtained during the initial few days, SDOT made additional changes on September 11 to reduce confusion.  “No turn on red” signs replaced “turn on green arrow only” signs and a green straight arrow replaced the solid green circle light. After these changes, an observation of 52 vehicles on Second Avenue at Spring Street revealed that only two drivers made an illegal left turn when their left turn arrow was red, a 96.2 percent compliance rate.

“A better organized Second Avenue means a more predictable roadway for cyclists, drivers and pedestrians, and makes it safer for all users,” said SDOT Direct Scott Kubly. “Signals and signs make the rules of the road more clear.”

Since the bicycle lanes opened, travel times for drivers on Second Avenue have been better than originally forecasted. On the first day of the bike lane’s operation, it took drivers approximately one minute longer to travel the 0.71 miles on Second Avenue than before the conversion. With numerous events occurring that first week, to include opening day of the National Football League season at CenturyLink Field, engineers expect travel times to decrease further as drivers become accustomed to the new roadway configuration.