SDOT Director Kubly admits to Pronto ethics violations, could be fined up to $10K 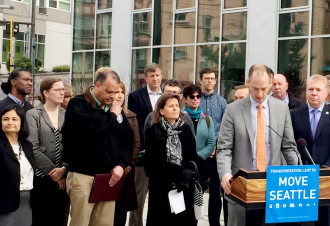 SDOT Director Scott Kubly has admitted that he failed to obtain a waiver before working with his former employer about Seattle’s bike share system Pronto.

The months-long ethics investigation concluded that Kubly violated ethics rules by working with former co-workers during the bike share system’s first year in operation. Under an agreement between Kubly and Marilyn Brenneman, the investigator the Ethics Commission hired for this case, Kubly would be fined up to $10,000, though $5,000 of it would be suspended so long as no other violations occur according to a settlement agreement signed June 21 (PDF).

The Commission will decide at their next meeting whether to accept this settlement or hear the case further. The Commission is scheduled to discuss the case July 6. Kubly declined to comment at this time, saying, “we do not want to interfere with their deliberations.”

The problem isn’t that he hid previous work connections from the public. His experience helping to launch bike share systems in Washington D.C. and Chicago as well as his six-month stint as President of Alta Bicycle Share from January through June of 2014 were publicly lauded when he was hired to become SDOT Director in July 2014. Since Puget Sound Bike Share was set to launch a system in Seattle months after Kubly was hired, his bike share experience seemed like a good thing for the city.

However, city ethics rules state that city employees are not to do business with a previous employer for a year after their employment ends without first obtaining a waiver. That did not happen. Kubly admitted this violation and agreed to be fined.

A second, similar violation notes that while Alta Bicycle Share was bought by Motivate as of January, 2015, and ceased to be a former employer, enough key staff at Alta continued to Motivate that Kubly should still have had a waiver to do business with this new company he never technically worked for.

Importantly, however, the ethics decision finds that “these violations produced no evidence that Kubly sought or received any personal financial gain in connection with the acknowledged violations.”

He belatedly filed the paperwork for a waiver in September 2015, and no actions taken after this date (which would include the City Council buyout deliberations) are considered violations, the document states.

11 Responses to SDOT Director Kubly admits to Pronto ethics violations, could be fined up to $10K