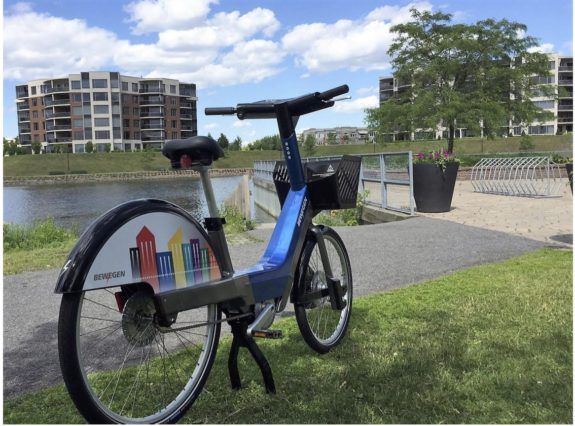 Could this be Seattle’s new bike share bike? Image from Bewegen’s bid documents.

Though it’s not final, Seattle has indicated that it intends to select a young Quebec-based company to launch an all-new electric-assist bike share system.

That means both Motivate, the current Pronto Cycle Share operator, and the existing Pronto equipment are out if the deal goes through. The city is now negotiating directly with Quebec-based Bewegen to finalize a deal.

As we explore below, the differences between the bids are huge, representing very different theories of how bike share can work in Seattle. In some ways, the city’s decision to pursue the all-electric option shows a Seattle Department of Transportation still looking to innovate and experiment, though that comes at the expense of increasing station density and expanding the reach of the system.

Bewegen scored highest among the six bids returned (PDF), according to analysis by the city’s bid review team. Motivate came in second and Shift Transit (using the same equipment provider as Citibike in New York and Divvy in Chicago) came in third.

Seattle’s City Council approved a buyout plan for Pronto in the winter, including $5 million to expand the system. One of the conditions was that there would need to be an open bidding process to ensure the city gets the best deal and to ensure that Motivate does not get any special treatment.

SDOT Director Scott Kubly has been recused from the whole bidding process. Kubly caught a lot of heat for failing to file an ethics disclosure related to his previous work as President of Alta Bicycle Share, the company later bought out and turned into Motivate. Kubly has never worked for Motivate, and the investigation found he has no financial ties to the company.

Last month, SDOT’s Chief of Active Transportation Nicole Freedman, who had been heavily involved in the bike share buyout process, left to become Director of Transportation in Newton, Mass.

The wonderful, smart and very friendly Kyle Rowe has moved from his spot as general bike planning superhero at SDOT (he has worked on many small-budget bike safety projects in addition to working on the city’s bike work plan and the much-improved bike map, which we just wrote about). So if Motivate is really out, then there will pretty much be a complete turnover in the bike share staffing from the ground up when the new system launches. Is that a good thing? Well, I can’t say for sure.

Bewegen’s proposal (PDFs here, here and here) would include 100 stations and 1,200 bikes, all of them electric-assist. That means fewer than double the current 54 stations, so the service area would only expand a little bit. In addition to the current service area, there would be stations in Wallingford, Fremont, Queen Anne, North Capitol Hill, First Hill, some of the Central District, North Beacon Hill, Mount Baker, Columbia City and Othello. Here’s a sample map (station locations are approximate): 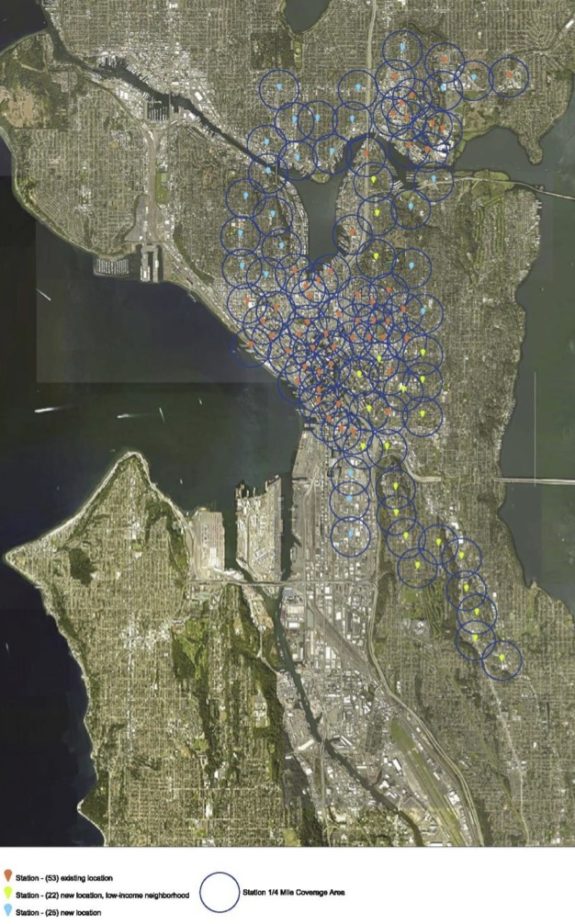 This system would have about 7 stations per square mile. Many are 1/4-mile apart, which is a pretty significant walk. They are also going to need to reassess those three “low-income” stations in North Capitol Hill mansion territory. Bewegen must have a lot of faith in their e-assist technology if they are including Queen Anne Hill.

The boxy-looking bikes can go about 40 miles on a charge, and it takes about 90 minutes to go from fully empty to fully charged. Even if the battery dies, the bikes still work like regular bikes (though probably a bit more sluggish).

“Bewegen’s Pedelec (electric assist) bikes introduce the user to a new bike-riding experience, and out innovative technology requires only a small amount of pedaling to travel a substantial distance,” the company wrote in their bid. “Further, Bewegen’s Pedelec bikes are equipped with automatic adjusting transmission, which will reproduce the proper gear ratio to accommodate the City of Seattle’s mountainous topography.”

The motor helps drive the pedals, not the wheels, so you still have to pedal while riding. The motor just kicks in to give you some help, essentially flattening hills. They can also speed limit the assist for safety.

But there is an additional catch with Bewegen’s stations: They all have to be hard-wired into the city power grid. This may limit their location options even further than solar-powered stations like Pronto currently uses. So many of the stations you are currently familiar with may need to move. Bewegen has budgeted $10,000 per station for location and power-connecting needs. But this should definitely be considered a variable.

And that’s perhaps the most important point to make with this proposal: It is an experiment. Bewegen has not yet created an all-electric system like this one. E-assist bike share is a young technology. Like any experiment, it could fall short. Or it could revolutionize transportation in super-hilly Seattle.

Bewegan is also a very young company. It has about as many bikes in action worldwide (about 480) than Pronto (500), though that is set to change when systems in Richmond (220 bikes) and Baltimore (500 bikes) launch. But while their proposal would install fewer stations than competitors, the all-electric fleet of bikes put them ahead in the city’s eyes. About 25 percent of the equipment costs will be paid for by Bewegen, which is anticipating $600,000 in profit annually above operational costs.

The cost and liability-sharing elements of the system are certainly a central piece of the city’s negotiations. Basically, the more liability for operational losses the city assumes, the more of the profits it would get to keep and vice versa.

The pay structure for users would be essentially unchanged from the current Pronto structure, though all “free” ride times would be 45 minutes instead of 30.

Above is Bewegen’s anticipated timeline for launching the system. SDOT’s Andrew Glass Hastings told the Seattle Bicycle Advisory Board that if a spring or summer 2017 gets pushed back, the city will hold the launch until spring 2018. This would avoid the mistake Pronto made by launching in the rainy fall, which sapped energy from the system’s opening.

Perhaps the biggest surprise is that Motivate opted not to submit a proposal building on their existing 500 bikes and 54 stations. And that may have been a good call, since 8D Technologies submitted a bid that would have built on the existing equipment, and they placed second to last.

While Motivate essentially abandoned what could have been a 500-bike head start, their proposal utilizes bikes that are incompatible with the existing system. Instead, their bid (PDFs here and here, some technical details redacted) proposed a system similar to Portland’s new Biketown system, which uses bikes that can be locked anywhere (though there is a small fee if you don’t use the official docks). Because the technology to access a SoBi (“Social Bicycles”) system is on the bikes and not at station kiosks, it is cheaper to install more stations using this model than with the current Pronto hardware.

Motivate’s proposal would have installed far more stations than Bewegen, clocking in at 160 stations and 1,600 bikes. And since you can dock a SoBi bike at any bike rack within the service area for a small fee, the flexibility of the system is even a bit better than the 160 stations would suggest. Here’s a look at their sample map: 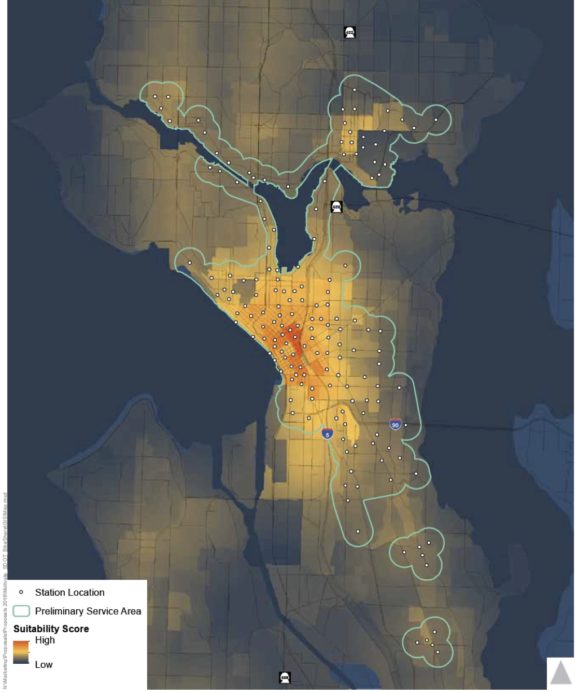 And Bewegen could learn from their Rainier Valley map. Connecting Rainier Ave destinations for Link Stations on MLK could be a very popular use for bike share there.

Motivate would have far more stations in low-income neighborhoods than Bewegen.

However, only 100 of the 1,600 Motivate bikes would be pedal-assist. The rest would ride more or less comparably to the existing Pronto bikes.

Motivate’s plan would also revamp the pay structure to be more like Biketown in Portland. This means there would be a $2.50 single ride fare (30 minutes). Members would get 90 minutes of “free” ride time daily.

What about the current Pronto equipment?

During Council deliberations, Councilmember Lisa Herbold called Pronto’s equipment a “flip phone” at a time when the city wants to buy a smart phone. So she opposed the city buying equipment that could already be outdated. So now that it’s clear the city will not be continuing to use the existing equipment when it relaunches, was Herbold right?

Yes and no. I will admit that she may be more right than I gave her credit at the time. To my surprise, even the equipment operator Motivate doesn’t seem interested in building on it, and it may not be the most flexible hardware for future expansion. So, Councilmember Herbold, you were right about that.

But the equipment Pronto currently has is extremely reliable and still has many, many miles left in it. The city will try to sell this equipment, and I bet a small city or big campus looking to get a 50-station bike share system will get a good deal on it. Seattle paid $1.2 million for it in the winter. There’s simply no way you could get a comparable system for that price (it’s obviously too early to know what price tag the city will put on it). It’s hard to predict the future, but there should be a good chance of the city recouping its costs.

And remember, people are still using the system every day to get around. So that investment is currently helping folks move around the city as Bewegan and SDOT figure out how to launch and expand the new system.

8D Technologies, the company that makes the kiosks and docking technology Pronto currently uses, submitted a bid that would build on the existing system and would have no downtime during expansion. Their plan would bring the total system to 130 stations and would include a mix of bikes like the ones currently in use, smart bikes similar to the Motivate proposal and e-assist bikes.

Unfortunately, their plan also called for creation of a non-profit to own and operate the system, which is what Seattle just worked so hard to get away from. 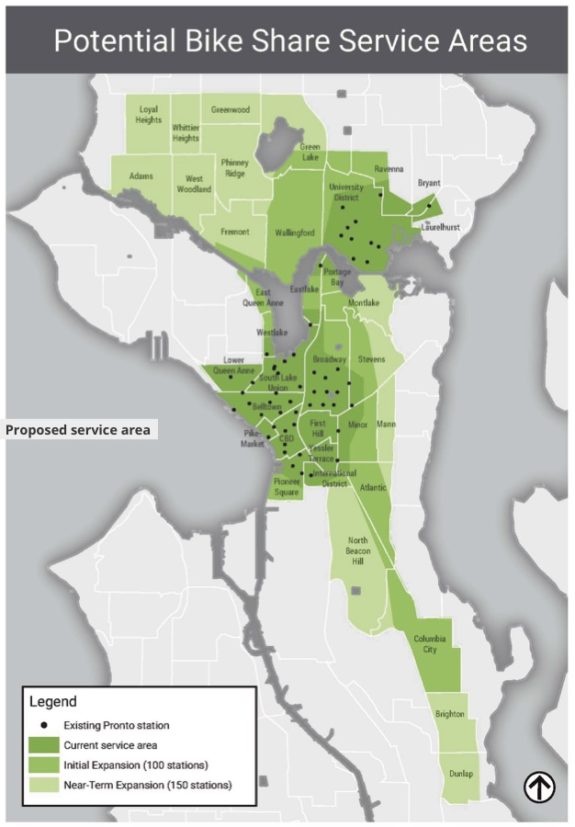 It’s kind of confusing, but the bid actually only commits to 130 stations, so the real station area would be somewhere between the middle and light green areas. Not that any of this really matters, since they got fifth out of six and have very little chance of winning.

The difference between Bewegen and Motivate here is pretty much philosophical. What’s more important, density and flexibility or e-assist? I have long been a skeptic of e-assist bike share, worrying that the added cost would mean fewer stations. And conventional thinking says that station reach and density are the most important factors in a bike share system’s success. But that thinking doesn’t factor-in the draw of e-assist power.

So I’m not so sure anymore. I mean, imagine if anyone could just hop on a bike downtown and cruise up to First Hill. That’s a whole new connection that doesn’t practically exist today, and it could appeal to a lot more riders than a pedal-only system. Same goes for biking from Gas Works Park to go shopping on NE 45th Street in Wallingford. Or biking from Columbia City to Jefferson Park. Or from Seattle Center to the top of Queen Anne (well, let’s see how strong these motors really are). Of course it’s possible to make all these trips today by bike (and people do). But e-assist bike share could make them more inviting to far more people. And that ain’t worth nothing.

Then again, the draw of an easier biking trip could be offset by a longer walk to get to a station.

So I put it to all of you: What do you think the city should do?