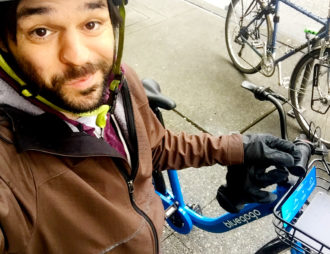 Yours truly about to ride a Bluegogo bike around downtown

I took a ride on what could be one of Seattle’s next bike share bikes and made it up one of downtown’s steepest hills.

It was a Bluegogo bike, one of at least two companies actively pursuing Seattle as one of the first major U.S. markets to launch a low-cost, app-connected, stationless bike share service.

We broke the story late last week about Bluegogo and Spin eyeing a Seattle launch in the very near future. How near? Bluegogo has thousands of bikes in storage in the Bay Area right now (UPDATE: Bluegogo requested I not list how many thousands), said Anthony Desnick, who works on strategy and expansion for Bluegogo. 3,000 of them are earmarked for Seattle. That’s six times as many bikes as Pronto.

But because stationless bike share is such a new concept, Seattle does not even have a permit these companies can buy for their bikes, let alone a set of rules for how they can operate. Both companies have expressed a desire for the city to create these rules soon, saying they can have bikes in operation on Seattle streets this summer.

If the city delays, however, another company could choose to launch without permits, following the “ask for forgiveness” business model that Uber used when it first launched. Companies are eager to gain market share ahead of the competition, and that means getting on the ground first.

But before getting too far into the weeds about market share and city regulations, perhaps you all want to know: How are the bikes?

Desnick invited me to take one of the company’s bikes for a spin downtown Monday. 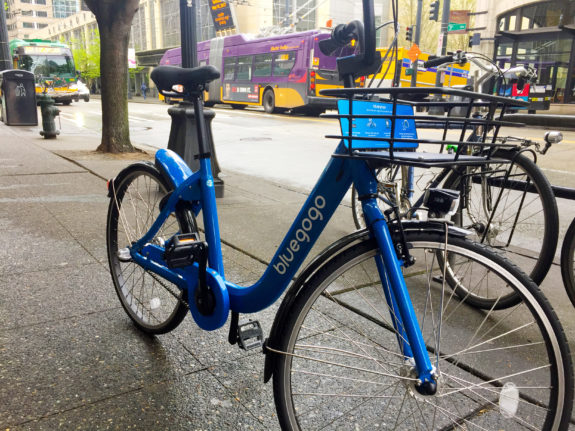 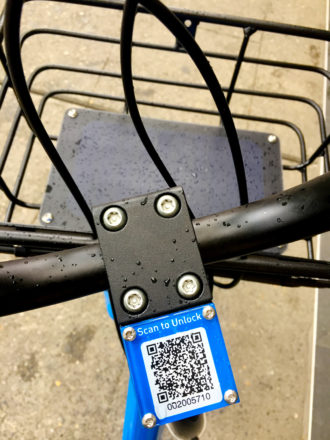 The bike has a universal step-through frame, auto-on front lights (UPDATE: The rear only has a reflector, not a powered light) and a comfortable upright position, like most bike share bikes. The basket in the front is much more usable than Pronto’s odd gear holder thing. The seat seemed to have a wide range for people of many heights, but I didn’t have any short or tall people with me to try it out. Next time!

It is lightweight, at least compared to Pronto bikes and especially compared to B-Cycle and older Motivate bikes like Capital Bikeshare or CitiBike. But it also feels cheaper than those more traditional, bomb-proof bike share bikes. That wasn’t a problem on my ride, but the true test will be how well the bikes are working after a year of hard city life.

It has a rim brake on the front wheel and a drum back on the back. The front rim brake gave easier stopping power than Pronto bikes had on steep downhills, which is great so long as the company maintains that front brake often enough (rim brakes require more regular maintenance than drum brakes, which is why most bike share systems don’t use them).

The tires are solid rubber, so they cannot get flats. You probably wouldn’t even notice that there’s anything different about them. But they are not super-wide like Pronto’s tires, so there could be a streetcar track risk (all the more reason to build the Basic Bike Network as soon as possible).

It has three gears, which is fewer than Pronto had. And the low gear is not quite as low as on Pronto (which was very low). I rode up Spring Street from 2nd Ave to 4th Ave, which is a very steep section of downtown. I needed to stand up when pedaling because the low gear wasn’t low enough to sit, but I made it.

I don’t know if I can say whether this bike is easier or harder to pedal up steep hills than Pronto. On one hand, I had to stand. But on the other hand, it is a significantly lighter bike. It’s essentially a toss up. Certainly nothing compared to the e-assist Bewegen bike the city had initially hoped to bring in to replace Pronto. Mayor Ed Murray abandoned those plans in January.

Like with Pronto, I doubt many people are going to use Bluegogo to get from 2nd to 4th or 5th downtown. But you can definitely ride a Bluegogo up the less steep climb to Capitol Hill, which is important.

I was not able to try the app or the rear wheel locking mechanism because the system is not yet up and running in Seattle. But there was an explainer on the front basket: 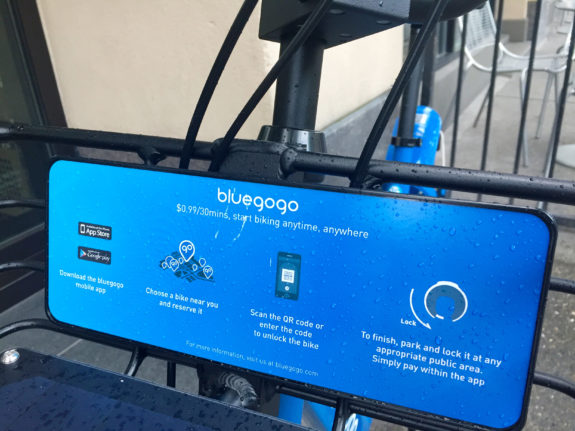 And the biggest selling point is on the back of the saddle: 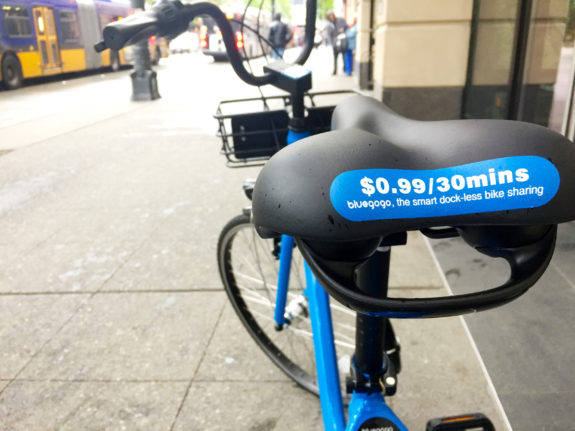