By killing Pronto, Seattle could become the center of private bike share innovation 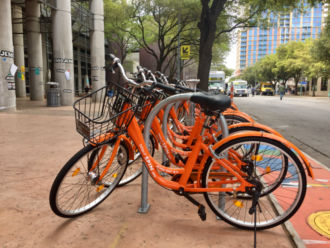 Photo from a Spin pilot launch in Austin during SXSW. Image from Spin.

The Pronto docks have been scrubbed from city streets. As much as I am sad to see it go and feel the system never got a fair shot at success, it’s done. Time to move on and look to the future of bike share in Seattle.

And we may not need to wait long.

Spin bikes are free-floating. Open up their mobile app to find a bike near you. Walk to it and scan the QR code on the bike to unlock the rear wheel. Bike to your destination and park it using the kickstand. Lock the wheel to end your trip. And that’s it. It’s basically Car2Go, but a bicycle.

But here’s the kicker: It only costs $1 per ride (Bluegogo is $1 for 30 min, Spin says “Ride for $1”). Dock-based bike share systems cannot touch that price.

So when is Spin going to launch in Seattle?

“As soon as possible,” said Ko, who was previously a product manager at Lyft. Spin staff recently flew out to Seattle to meet people and check out the possibilities for themselves. “For a top tier city in the US, it’s really rare to not have some form of bike share.”

They are looking to move quickly to launch at least as a pilot program with a service area in the center of the city, including at least downtown, South Lake Union, the International District and Capitol Hill.

And time is of the essence, because Spin is not the only company with their eyes on Seattle’s newly bike-share-free streets. Bluegogo, a China-based company that already has big systems in service overseas, is looking to make an entry into North America. And Seattle just made itself a promising option.

“We would be happy to bring it to the city,” said Ilya Movshovich, VP of US Operations for Bluegogo (UPDATE: Movshovich is no longer with Bluegogo). When I asked when they might start operations, Movshovich said, “When it’s less rainy and less cold would probably make more sense.”

Other companies in the business include Mobike, Ofo, Noa, LimeBike, Zagster and Social Bicycles (which powers Portland’s new Biketown system, though that system still requires parking to a bike rack).

So these companies have an incentive to be on the ground first so they can establish a user base before competitors move in. But they also see a need to work with cities to make sure the rules are clear and make sure the community understands how the system works.

Both Ko and Movshovich expressed a desire for an official city permitting process for their bikes. In Bluegogo’s case, the company learned that lesson the hard way in San Francisco, where the city threatened action and forced the company to pull their bikes from the streets. Spin had a similar, though less confrontational, experience in Austin. Both company leaders want to go about things a better way in Seattle.

“That’s not what we stand for,” said Ko of other unnamed companies’ approach to launching without permits or concern for city space. The web is chock full of stories about mountains of cheap bike share bikes left in city parks and on city sidewalks in cities with huge numbers of users and competitors like Shenzhen, China. People have started to label any private, stationless bike share system “rogue bike share,” which actually makes them sounds pretty cool.

But beware of attempts to group all these companies together. Seattle should give the industry the space to do things right in our city by creating a responsible pathway for them.

Ko’s ultimate vision for Spin in Seattle is “equitable bike share to all neighborhoods.” Spin is even trying to invest in the city through a new effort they are calling the “Spin Cities Project.” The company will seed their Seattle project with $10,000 to start and will put a portion of the bike share system’s proceeds into it. The stated mission is “to fund smart urban infrastructure, with the aim of improving the quality of life of people in cities.” From Ko via email:

The Project’s first initiative will be focused on funding bicycle safety and infrastructure in cities. Spin will be contributing a portion of ride revenue to continually fund the Project. This supports Spin’s goal to create an accessible, equitable, and environmentally-friendly mode of transport.

And most of all, let’s not lose sight of the potential benefits: More people riding bikes to get around our city, filling the gaps in our transit network in a fun, healthy and congestion-reducing way.

“Riding a bike, not to sound cliche, really is good for your heart,” said Movshovich.

And not only would these companies require no public funding, but by purchasing some kind of permit for their bikes they would actually pay the city street use fees.

It seems that no applicable street use permit exists today, so the city would need to create a new one similar to how the city created a new permit for free-floating car share like Car2Go. These permits are the city’s opportunity to shape how the systems work, including where exactly bikes can be parked in city right of way.

The city could also use the permit process to encourage systems to serve more parts of the city, including underserved areas with less population density (and, therefore, less profit potential) like Rainier Valley. When Car2Go launched, for example, the company was allowed to choose its own limited service area up to a number of cars in operation. But once they crossed that threshold, they had to open the service area to the whole city. Perhaps bike share permits could work similarly, though serving some of the hillier or more freeway-divided parts of town might be harder with bikes than with cars.

But the city needs to act fast to create if it wants to both create rules that benefit the city’s interests and create a legal landscape for these systems to get up and running successfully this summer.

“We want to go in as fast as possible,” said Ko. “But at the same time, we want to make sure we’re being as responsible as possible.”

On the flip side of all this, it’s also possible that there is no city regulation preventing a company from simply dropping bikes on the streets without obtaining permits. If a company moved in aggressively Uber-style, what’s the city going to do about it? Start confiscating bikes that people are using to get around in the vacuum of the city’s own failed system? That’s not a great look.

Other cities with publicly-funded bike share systems like San Fransisco and existing bike share operators who are part of the North American Bike Share Association (I suppose you could call them “Big Bike Share”) are prepared to fight these stationless startups in part to protect their own systems.

But Seattle doesn’t have that issue anymore, and big bike share companies like Motivate don’t have a lot of friends left here at the moment. With public bike share systems, the city has all the control. And there may be some real benefits to that. But Mayor Ed Murray abandoned his public bike share effort, so that’s a moot point.

The bikes will have a number people can call to report any issues, and Spin staff will respond quickly to address them. And hey, they are bikes, so anyone can pick one up and move it out of the way. Perhaps if responsible users get in the habit of fixing other people’s bad parking (or bikes moved by vandals, which is inevitable), problems can be kept in check.

The city can also set their expectations for company responsiveness to issues as a condition of their permits.

Another option, which Bluegogo was initially looking at, would be to require bikes to be parked at existing city bike racks. But that has limits both in terms of scale and could end up upsetting people who ride their own bikes.

“Why is a business using public property, I can’t park my bike anymore,” said Ko, imagining how someone who bike might feel if city bike racks get filled with private bike share bikes.

And what about helmets? King County has a very rare all-ages helmet law on the books, and Pronto installed helmet vending boxes at every station. Without stations, that’s not an option.

Ko said Spin’s plan, at least at first glance, is to include “all the necessary warning and requirements to say that you should wear a helmet.” But users will be responsible for bringing their own.

How will these bikes handle Seattle’s hills? Will the bikes be sturdy enough and customized with low enough gearing to climb up grades like Capitol Hill?

How will Seattle Parks respond when users inevitably park these bikes in city parks? The Parks Department was resistant to Pronto stations in parks, but parks are such obvious magnets for people biking. And that is a good thing.

Having no dedicated dock locations opens the door to all kinds of new opportunities and problems. Users can bike directly to the front door of their destination rather than finding a dock a block (or four) away. And people can use the bikes to go to major destinations and special events without worrying about full docks when they get there.

On the other hand, bikes could end up in uninvited places, and the rebalancing of bikes during major events could get tricky. But I am excited to see how these systems play out in Seattle. After the long, frustrating death of Pronto under mismanaged city control, let’s see if private companies really can do better. If they succeed, then Councilmembers Lisa Herbold and Tim Burgess were right when they voted against the city buying Pronto, saying the private sector could fill the gap.

The city has almost nothing to lose, but it has a whole new healthy transportation option to gain.

@seabikeblog I met with the Spin guys when they were in town. Really smart, motivated, and collaborative. Looking forward to learning more.

Here’s a promo video from Bluegogo to give you a feel for how it works:

24 Responses to By killing Pronto, Seattle could become the center of private bike share innovation