The Westlake Bikeway is officially open, and it was worth the compromises 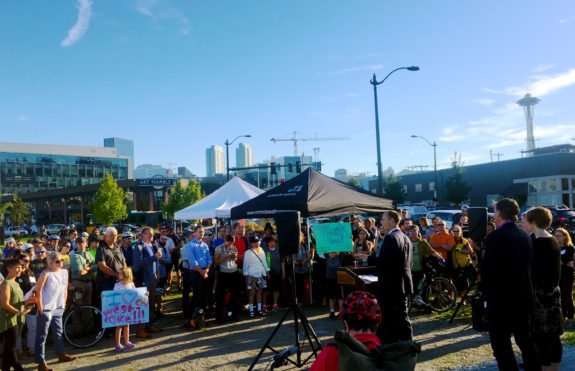 The Westlake Bikeway officially opened Thursday, finally creating a flat and separated bike route from the Ship Canal to the city center.

“This project is really going to make this corridor safer and more predictable for everyone,” SDOT Director Scott Kubly told the crow gathered in Lake Union Park at the south end of the new bikeway.

“The very first time I was in City Hall was about eleven years ago when I was a new bike commuter,” Councilmember Mike O’Brien said. The reason for his visit? The city was doing heavy work on the Westlake parking area, and O’Brien was pushing to get bike lanes included.

He was not successful eleven years ago, but the new bikeway is “much better than the bike lane I envisioned,” he said.

Much like O’Brien, the movement to build political support for the new bikeway found a lot of supporters, many of whom had never been involved in a city campaign like this one.

“Thousands of people had input over time because this is Seattle,” Mayor Ed Murray said, poking fun at the often arduous Seattle Process. But it’s true.

When something that has been in the works so long finally becomes reality, it’s important to think about everything that went into it. This project spans mayors, City Councils and SDOT leaders (former Councilmember Tom Rasmussen was one of the biggest proponents of this project back when the city won the grants needed to fund it while he was Chair of the Transportation Committee).

But beyond the political leaders (and their aides), it took a lot of work by people like yourself packing open house events, hosting protests and forging relationships with local businesses. Cascade Bicycle Club deserves a lot of credit for organizing this work over the years (disclosure: My spouse Kelli works at Cascade). 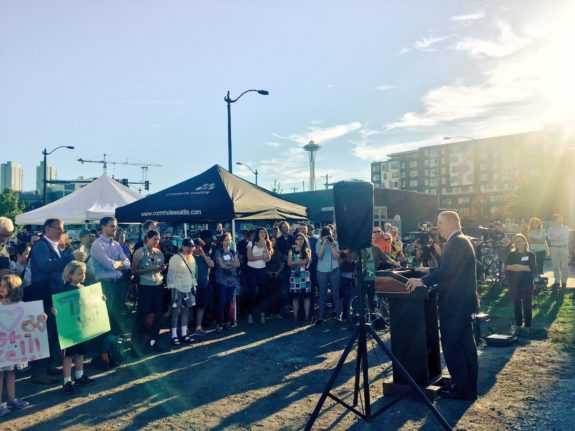 Mayor Ed Murray got a lot of praise during the opening celebration for working around the legal threats and working out compromises that ultimately prevented a full-on legal showdown.

A lot of time and money was spent trying to squeeze as many parking spaces alongside the bikeway as possible. Compromises were made that resulted in a skinnier bikeway than originally planned. But now that’s it’s open, it’s so much better than before. 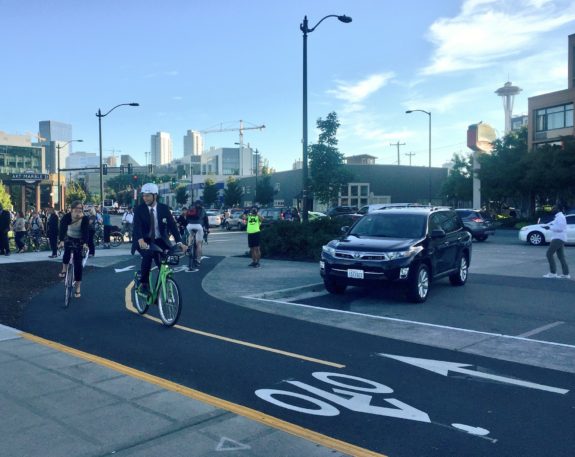 SDOT Director Kubly kicks off the opening ride with Cascade ED Kiker behind him.

What used to be a bike ride through a parking lot of landmines, where any car could pull out into your path at any time, is now a very low-stress and rare flat bike ride past businesses and floating homes on the west side of Lake Union. Here’s a video by Shirley Savel to give you a taste:

Work isn’t totally complete, though. While the bikeway itself is a huge improvement, the connections on both ends need some work. Pavement fixes and better wayfinding leading north to the Ship Canal shouldn’t be too hard to complete. The sidewalk/trail leading to the Fremont Bridge is the same as its been in recent years, which is a bit too skinny for the volume of people biking to the new bikeway. The Fremont Bridge sidewalks remain a serious pinch point for biking and walking, but this project puts some extra pressure on the east sidewalk. There is also no clear, direct way to bike from the west Fremont Bridge sidewalk to the new bikeway due to the awful Dexter/Westlake/Fremont Ave/Nickerson intersection.

But those are mostly longstanding, familiar problems. My biggest concern is with the south end of the bikeway. People are dumped onto a sidewalk near the intersection with 9th Ave, a very wide intersection with long signal wait times and no clear way to get to the paint-only bike lanes on 9th Ave leading through South Lake Union and into downtown.

If people take one look at 9th Ave and rightfully think, “Hell no I’m not biking on that car-clogged street,” they could find themselves biking on the skinny paths winding through Lake Union Park looking in vain for a good bike route through South Lake Union that doesn’t exist. Terry is one-way the wrong way (and has streetcar tracks), Boren does not have a quality crossing at Valley Street for some reason, Westlake has notoriously dangerous streetcar tracks and Fairview Ave N is way too busy.

As recently as April, the city had planned on building protected bike lanes on 9th Ave this year, but that plan has been cut back and delayed. The good news is that the city recently announced their phased rollout of the bike lane, which includes improvements to the segments closest to the new bikeway in 2016: 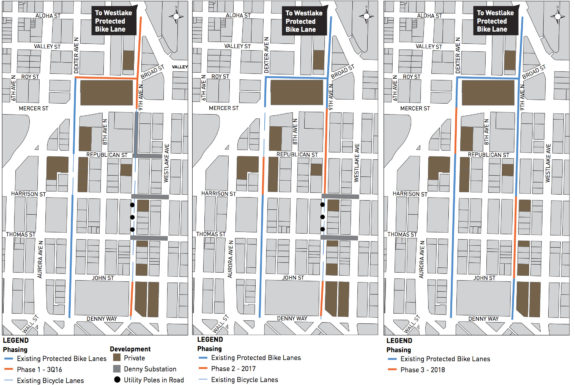 The city is also installing a signal at the start of 8th Ave N, which could be a good way to get from the new bikeway to Dexter. Though, of course, Dexter has its own challenges with constant construction closing sections here and there.

While the Westlake Saga has ended seemingly well, it is also a potential case study for how our environmental review process can privilege wealth above the environment and public good. After all the work to gather political support for an idea, then win Federal funding for it, then conduct huge outreach events with thousands of participants, a “superyacht” marina can still sue to stop or delay the whole thing because they would rather have some extra public parking spaces. In this case, the city let them keep the couple parking spaces they were whining about (by allowing a small section of the bikeway to be skinnier than it should be) and the lawsuit was dropped. The harsh response from the scorned public may have helped, too.

But as we’ve seen with the Missing Link in Ballard or the East Lake Sammamish Trail, lawsuits like these can delay progress on obviously-environmentally-beneficial projects like bike trails. Often, it’s not about the environment, it’s about whether the party or parties suing have the money to fund the legal fight. In fact, sometimes the threat of a legal fight by someone with the cash to back it up can be enough to discourage a city from making needed improvements.

Environmental review was created to watchdog giant projects with huge potential impacts like freeways. But when such a rule can be used by bike trail opponents to save some car parking spots at the expense of people’s health, it’s clear the law is broken.

42 Responses to The Westlake Bikeway is officially open, and it was worth the compromises