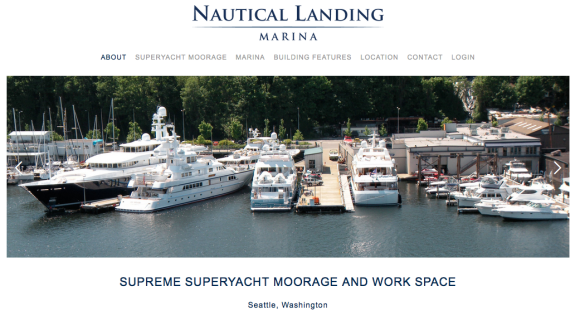 Rather than engage in the Westlake bikeway community process, this superyacht marina has sued anyway. 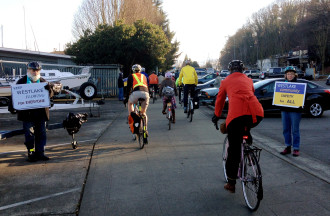 Concerned community members hold signs during a bike ride in support of the bikeway. The community process was not always easy, but people stuck it out and made it work

For more than a year, a group of Westlake residents, business owners, industry leaders and community members — including people who walk, bike and drive — have been meeting regularly to work with designers and the city to craft a design plan for a safe Westlake bikeway that considers everyone’s needs.

The meetings and public process were sometimes difficult, with people seeing things very differently. But folks worked through the plans inch by inch and parking stall by parking stall. In the end, nobody got everything they wanted, but that’s exactly how compromise works. You can see their extensive meeting notes here.

So it came as awful news that Nautical Landing, a self-described “superyacht” marina and dealer, has filed a lawsuit anyway, undercutting all that community work and threatening to delay the project for at least a year. Their lawsuit is a slap in the face to Mayor Ed Murray — who helped bring people into the design committee rather than the courts — and to everyone who dedicated their time and energy to this process, which was created because community members made the awesome decision to drop their late 2013 lawsuit against the Bike Master Plan and work things out instead.

The Nautical Landing lawsuit has no legitimate beefs with the project (read the complaint in this PDF). It basically argues that the city has “prejudiced” the superyacht marina by not completing environmental review for 1.2 miles of bike lanes in a city-owned parking lot. It’s just a delay tactic by a company that clearly has the money to burn and would rather just pay to get their way than work it out with everyone else through the community design process.

Nautical Landing is going back on the deal established in early 2014: If the city crafts the design details with community input and guidance, they won’t sue. Well, even though the final design is full of compromises and preserves nearly all the parking, they sued anyway. Though a superyacht moored on their docks could be worth as much as $160 million, Nautical Landing’s word apparently isn’t worth anything.

The community design process was a huge success 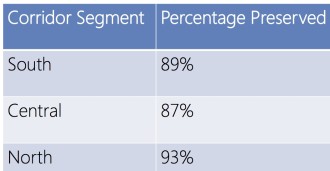 Parking in the final design

The biggest concerns people raised during the public outreach phase were about parking. Initial plans showed that most segments would displace between 5 and 35 percent of parking spaces, but a couple could see 50 percent. But after a long, hard process working through different parking lot design changes and squeezing in spaces where possible, final plans will preserve 90 percent of the parking along the corridor, far more spaces than are used today (see this PDF presentation from a recent meeting of the Design Advisory Committee for more details). 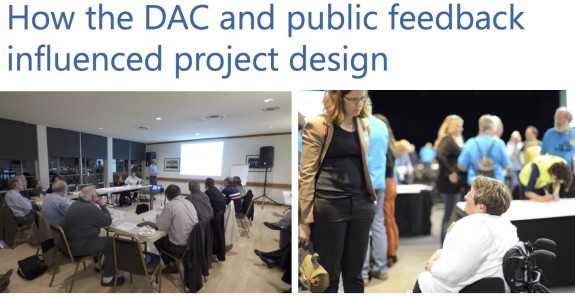 The process also identified ways to adjust the parking rules to make sure businesses have a more dependable supply of short-term parking available. Previously, the all-day unlimited parking spots were being used by center city commuters trying to get around paying for a spot at work. By putting time limits on some spots, residential parking permit requirements on others and turning the most in-demand spots into paid spaces, the city has made the lot more focused on Lake Union Park, residential and business access.

Preserving parking was not this blog’s priority, but it was important to other community members and I am happy that people were able to get together and work it out. What started as a tense public fight (with lawsuits starting to fly) developed into a community design for a better Westlake for everyone. This is how our city should work.

According to a recent presentation to the Design Advisory Committee, here are some other ways the community guided the design:

And, finally the design process also got the city to commit to reviews of how the design is working one month, six months and one year after construction. So if there are problems, the city will go back and make adjustments. 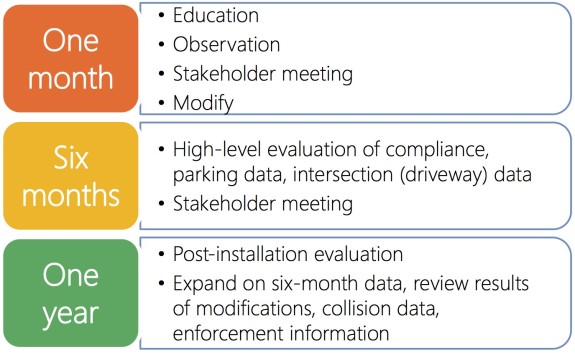 Nautical Landing should drop their lawsuit. I’m not sure what battle they think they’re fighting, but they had all the chances in the world to get involved with this project and guide the design with everyone else.

You shouldn’t get to just pull out your pocket book and pay to silence everyone else. We have a funded and community-led design for a better Westlake that is shovel-ready, with construction scheduled to start in the fall. If all goes through on schedule Westlake will be a safer, more active and more positive place for everyone by next spring.

If Nautical Landing succeeds in delaying construction and putting grant money earmarked for this project at risk, their selfishness will hurt their community and their city. If Nautical Landing wants to be a good neighbor, they must drop this lawsuit.

Here are the people who dedicated their time to help craft the design. Whether you bike, live or work on Westlake, we all owe them a big thank you: 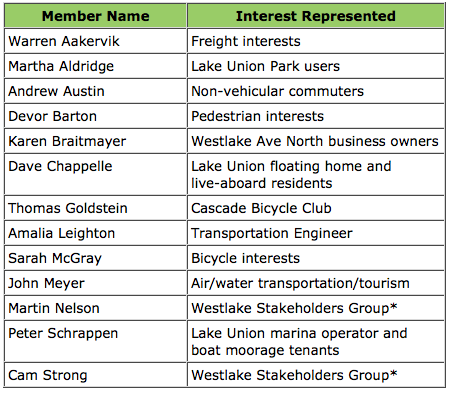 UPDATE: I heard back from SDOT Spokesperson Rick Sheridan about the case. Unfortunately, he could only say, “As a matter of policy, the City does not comment on ongoing legal actions.”

UPDATE x2: Cascade Bicycle Club says in a press release they are “disappointed” in the lawsuit: “Nautical Landings’ lawsuit puts grant funding for this project at risk, delays the hard work of the DAC at achieving compromise and delays necessary safety improvements for the thousands of people who want to safely bike downtown.”