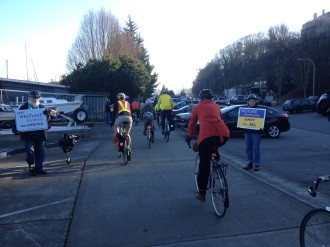 The group suing to delay the Bike Master Plan has dropped its legal challenge, opening the door for a City Council vote on the plan.

Ed Murray took office after the lawsuit was filed, and staffers said the mayor’s office quickly started meeting with the group to find a settlement.

“With the appeal now behind us, I look forward to working with the City Council as it moves to adopt the Bicycle Master Plan in the near future,” said Mayor Murray in a statement.

As part of the deal, the city will create a “design advisory committee” for the Westlake bikeway project (a model that may also be used for other projects around the city). The committee is designed so people “can see some of the sausage-making,” said Andrew Glass Hastings of the mayor’s office.

A common concern among some Westlake residents and business owners was that they felt they were not included in early stages of planning.

Dropping the lawsuit is a smart move by the so-called Westlake Stakeholders Group. Continuing to hold the city-wide Bike Master Plan hostage was threatening their position as a reasonable party in discussions about the Westlake project. Delaying the city-wide plan, a high-level document developed over 2012 and 2013, would have no impact on the Westlake project they are upset about. After all, as we wrote last month, who wants to deal with a bully?

Dropping the suit is a big sign that members of the group do want to help guide the design to create a better Westlake corridor for everyone. They deserve credit for making this call instead of dragging their appeal out to at least May, which they could have done.

Members of the Westlake Stakeholders Group I have spoken to say they felt a little steamrolled by the process, but they recognize that the current parking lot design is not comfortable or safe for people on bikes, which creates headaches for everyone.

At this point, City Council approval of the bike plan is really only delayed about a month, and planning work for road safety projects around the city have not been significantly impacted.

Mayor Ed Murray announced today a settlement has been reached on the appeal of the Bicycle Master Plan.

“I am pleased we have reached a settlement that allows the withdrawal of the Bicycle Master Plan appeal,” said Mayor Murray. “The creation of a design advisory committee for the Westlake Cycle Track Project provides assurance to the surrounding community that their concerns about the facility’s design will be addressed without holding up a city-wide bicycle safety improvement plan. With the appeal now behind us, I look forward to working with the City Council as it moves to adopt the Bicycle Master Plan in the near future.”

The draft Bicycle Master Plan is currently before the Seattle City Council for review and adoption. Developed through extensive community engagement over several years, the plan seeks to better encourage and accommodate people who want to safely ride a bike in Seattle.

The Westlake Cycle Track Project seeks to study and develop alternatives for a two-way cycle track within public right-of-way on Westlake Avenue North.