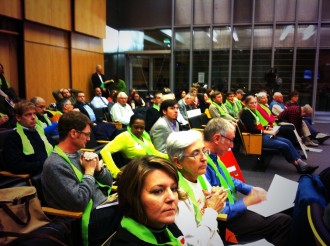 I know it’s hard to believe, but the Bike Master Plan update that began in early 2012 is still working its way through the bowels of the Seattle Process™. But it may finally be approaching the finish line.

The City Council Transportation Committee unanimously approved the Bike Master Plan update Tuesday, sending it to the full City Council for final approval. UPDATE: The vote is scheduled for Monday, during the 2 p.m. Council meeting.

Councilmembers Sally Bagshaw, Mike O’Brien and Tom Rasmussen took part in the unanimous vote, but Nick Licata and Jean Godden were also at the meeting and voiced their support.

“I am happy we have good legislation for this plan, for grandfathers and grandmothers,” said Councilmember Jean Godden, making a joke about how so much SDOT language references grandmothers — but rarely grandfathers — as an example of a user who should be served by safe streets.

“At the end of the day, if we have 250 mile of connected greenways and separated bike lanes, what a legacy we will leave,” said Councilmember Sally Bagshaw. She also thanked former SDOT Director Peter Hahn for taking her on a trip to Portland to check out their neighborhood greenways.

In addition to approving of the plan, the Council also added some guidelines for how SDOT should report back on progress and how any work should be coordinated with other modal plans and the neighborhoods they go in.

The Council also notes in its resolution that projects should “meet or exceed the latest applicable federal, state and local guidelines.” So if in a few years a better bikeway design becomes the standard, Seattle should use it instead of merely sticking to designs noted in plan. 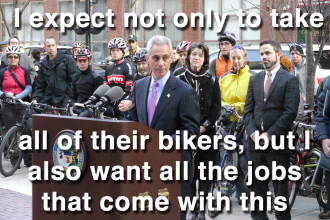 Photo courtesy of Grid Chicago, used with permission. Caption is ours (a quote from Rahm Emanuel)

In a funny moment, staffers included the image I made of Rahm Emanuel threat to Seattle and Portland during the opening of the the city’s first protected bike lanes in their dense downtown Loop: “I expect not only to take all of their [Seattle and Portland’s] bikers but I also want all the jobs that come with this, all the economic growth that comes with this, all the opportunities of the future that come with this.”

Rasmussen noted that he is friends with Emanuel, saying, “I take that personally.”

“I’ve seen that miserable little bike lane he has on Dearborn,” he said. “We can do better than that.”

Essentially, the Council has picked up where it left off following a very positive public hearing about the plan it held in December. There was no mention of the distracting lawsuit that delayed the plan for a couple months.

Now let’s get this thing to a full Council vote so we can focus on getting it funded and built.

Here’s the resolution (UPDATED with most current version):