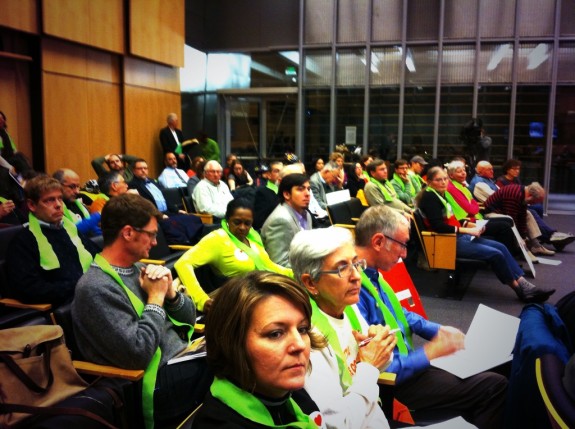 The Bike Master Plan sailed through a public hearing Wednesday with overwhelming support. Supporters of safe neighborhood streets packed the Council Chambers at City Hall to support the city’s plan for safe streets and bike routes in every Seattle neighborhood.

If you did not have a chance to speak, Cascade has created a handy online tool to email Councilmembers with your thoughts.

Of course there were detractors, but nearly all of them expressed concerned about a total of 5 miles or so in the 474-mile plan: Westlake Ave N and NE 65th Street. The core principles and goals of the plan received a warm welcome, with many speakers and families urging the Council to approve the plan quickly and get to work funding it. 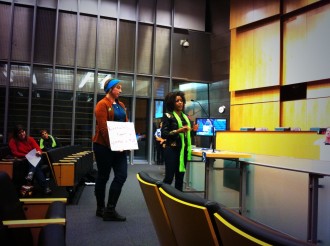 Phyllis from Bike Works told the Council that south Seattle has largely been left out of bike investments, and praised the new plan for putting an emphasis on connecting low-income and underserved areas of the city that have disproportionately dangerous streets.

It’s important to understand why support was so strong. The plan’s authors spent thousands of hours reaching out to different stakeholder groups and neighborhood organizations around the city. Concerns about freight mobility and conflicts with transit expansion were taken seriously, and many miles of the plan shifted in accordance with top concerns.

The plan is not a dream list from bicycle advocates, but it is an ambitious and achievable list of investments that will dramatically increase safety, health and bike access across the city.

The plan authors also empowered neighborhood groups to suggest the best routes for neighborhood greenways that will improve safety and make it easier for people of all ages to walk and bike near their homes, schools and business districts. As a result, a huge number of people feel a sense of ownership and personal investment in the plan. This is unheard of in the often dry world of civic planning documents, and a sign of success.

So the message is clear: Let’s start making it happen.

Most of the people who spoke in opposition to the plan were from an organized group opposed to a planned protected bikeway on Westlake Ave N. However, there seems to be a lot of confusion among this group, which said they are in favor of a “slow” bike trail in the area, but not a “cycle track.” One speaker suggested that people on the cycle track would be going 30 mph, a clear sign that the term “cycle track” is a confusing and clunky term that few people understand. It sounds like a place for high-speed racing, when in reality it is about creating a low-stress space where people of all ages and abilities can bike in safety and comfort. Really, I think we’re all interested in the same things for Westlake: Creating a space where people can get around comfortably and safely whether they are walking, biking or driving.

Some people spoke out against the NE 65th Street plans, which were significantly altered after a public hearing and series of public meetings this summer. The result was disappointing to many residents and bike advocates who wanted protected bike lanes running the entire length of the street from Magnuson Park to Green Lake. But it was an attempt at a compromise that mitigated some of the biggest concerns while still maintaining bike access to much of the street and keeping the bike network connected. Some people were still upset that bikes were in any way expected to be part of the street (and, again, several people expressed confusion about what a “cycle track” is, with one speaker suggesting it would occupy half the street. That, of course, is not true). I suppose you can’t please everyone.

Below is the Seattle Channel video of the full hearing so you can listen to everyone’s stories for yourself. Perhaps my favorite testimony of the evening was by Richard Edwards and starts at the 106:00 mark. He starts by talking about getting hit while biking to Roosevelt High School as a kid:

“I’ve been riding my bike all my life,” he said. “I used to ride to Roosevelt High School just off 65th. I got doored once. I got hit by a car once. But I lied to my parents and told them I got beat up instead so they would let me ride my bike to school.”

Now, Richard bikes downtown to work, and his commute is extremely important to him. He has Parkinson’s, and his ride to work helps control his tremor enough that he can continue working.

His story is a reminder that everyone in the city has their own story, and the value of safe streets means so many different things to so many different people. This is a plan full of hope and goodness for our city. Let’s put it into action.